After back surgery, Nolan cleared and ready to contribute 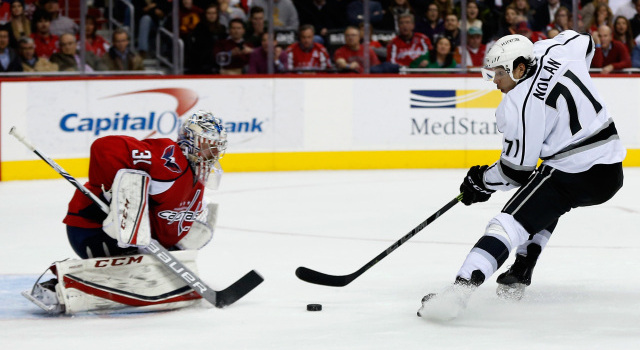 Though his production was yet to come, Jordan Nolan’s game was trending well in mid-February. The end result won’t show it – his difficult 2015-16 season ended with a zero in the goal column for the first time in his career – but before the Kings took the ice for a morning skate in Nashville to conclude their two-week, late-winter Grammy trip, he and the coaching staff were optimistic in the marathon ebb and flow of the season about the direction in where his game was headed.

That optimism dissolved when the then-26-year-old felt discomfort prior to the February 20 game against the Predators.

“I always felt like my back was a little bit tighter, and if you ask my teammates, I’m always complaining about my back,” Nolan said. “That last game in St. Louis, I played a lot of minutes, and then at the next morning skate, I felt a little tighter than usual that morning, and it just so happened that it gave out at that morning skate. I did the X-ray, and it showed I had a disc that already had some problems, so that probably caused the issue there.”

His game against the Blues on February 18, in which he logged 12:48 of ice time – his second-highest haul of the year – would be the last game he played in 2015-16. He ultimately returned to Los Angeles, and on March 3, had surgery to correct a herniated disc in his back. He was with his teammates at the end of the playoff series against San Jose before continuing his rehabilitation in late May back in St. Catharine’s, Ontario, where he lives during the off-season.

“I thought St. Louis was one of my better games of the year. I got to play a lot of minutes and kind of prove that I can play with that ice time and do something with it,” said Nolan, who has been skating with his teammates and a collection of prospects at Toyota Sports Center in preparation for training camp. “So I think that it’s pretty bad timing, but everything happens for a reason. I feel great right now, and I feel fast and feel strong, so I’m looking for a good year.”

Try as he might, the two-time Stanley Cup winner wasn’t able to engineer his own success last season. Effective when adhering to a heavy-hitting, north-south-type role, Nolan has been very useful at times on the forecheck, and with six goals in both the 2013-14 and 2014-15 seasons – go ahead and watch his play during the first half of 2013-14 to watch an effective fourth line role being chiseled out – has supplied production necessary during periods of his Los Angeles tenure to maintain his grip as a role-player capable of providing heavy minutes and opening up space and opportunity for his teammates.

Nolan was cleared to participate in training camp when he returned to Los Angeles in July to see a doctor, who was happy with the progress shown after he had worked with a physiotherapist in Ontario.

“I think it was a little different for me because I had all summer to train and get ready for it, so I think doc didn’t want to rush me,” he said.

He was cleared to skate over the summer, but “kind of took my time a bit more and made sure the back was fully healed” instead of pushing himself to be ready by a particular date, which had previously been his focus while he rehabilitated his injury late in the season.

“Once playoffs started, I was pretty much where I needed to be, maybe a little bit ahead of schedule, because I was working hard,” he said. “Just in case we went deep into the playoffs, I wanted to skate with the team, and I thought everything went smoothly [in rehabilitation]. It was unfortunate to see us lose in the first round and I wasn’t able to skate anymore, but it worked out.”

He’s not the only King to have undergone surgery this calendar year. As reported in May, Alec Martinez underwent surgery to correct shoulder discomfort after the season, and Dustin Brown had a “minor procedure” to address an issue with his right wrist. None of the injuries were expected to keep the players off the ice during training camp.

Speaking of camp, Nolan, a center, totaled five assists and an even rating in 52 games last season, and will face greater competition than in previous seasons, when roles and roster spots were more airtight. The Kings will also be taking a long look at prospect Michael Mersch, who can be sent back to AHL-Ontario without clearing waivers, as well as centers Michael Latta, Nick Shore and Nic Dowd. Andy Andreoff is also a versatile player who can play center and wing, while former Shark, Wild, Jet and Flame Devin Setoguchi, who is looking to resuscitate his NHL career, is expected to attend camp on a PTO.

Nolan is signed for two more seasons at a manageable $950,000 cap hit.