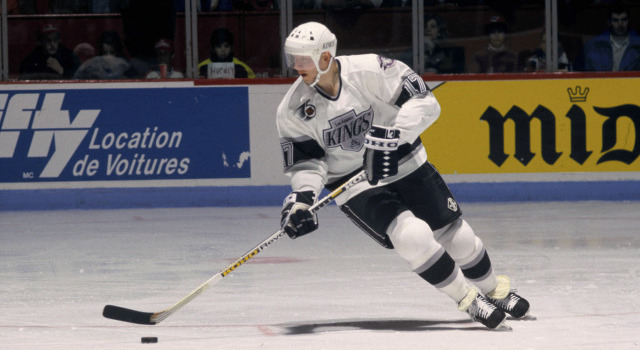 -The Kings will host a special 50th Anniversary Season Opening Weekend in October. One of the highlights of the Kings’ regular season home opener presented by McDonald’s on October 14 will be a reunion of the original 1967-68 Kings. The evening will also feature a number of surprise special guests and the Kings will wear their original Vintage Gold uniforms for the only time this season.

-The 50th Anniversary Season Opening Weekend concludes when the Kings serve as a presenting sponsor and lead honoree of the Children’s Hospital Los Angeles Gala on October 15. That evening will be a highlight of the Kings’ plans in the community this year along with the “Forever 50” community legacy program.

-The Legends Night Series presented by McDonald’s will return. The players to be honored this year are Ziggy Palffy (December 31), Tomas Sandstrom (January 7) and Jari Kurri (January 14).

-In addition to the Legends Night Series, throughout the season the Kings will host five additional 50th Anniversary Heritage Nights recognizing several former All-Stars over five Saturday home games — October 22, November 5, November 19, November 26 and December 10. The specific alumni to be honored are Rogie Vachon (November 19) just days after his induction in to the Hall of Fame. In addition, former Kings All-Star Butch Goring (1980) will drop the pregame puck on November 23. The Kings will also host Larry Robinson (an All-Star with the Kings in 1992), Steve Duchesne (1989 and 1990), Mike Murphy (1980) and Jaroslav Modry (2002) for pregame ceremonies with dates to be announced later.

-The Kings will unveil a special 50th Anniversary jersey during the club’s “Meet The Players” event on September 20. The Kings will wear the jersey for all Saturday home games beginning October 22. The limited edition Anniversary jersey along with exclusive 50th Anniversary commemorative product will be on display and available for purchase on September 20th at Team LA Store at STAPLES Center and on-line at teamlastore.com. Items included will be Center Ice Product, New Era Collectable Hats, Coins, Pins and more. Also, a special 50th Anniversary patch will be on the Kings on ice jerseys starting in the preseason. Early in in the season the Kings will add a special 2017 NHL All-Star Game patch to their uniforms as well. Starting this season all of the Kings official on ice authentic game used equipment will now be available for purchase at Team LA Store and online. The game used store will be launched early in the season.

-Another highlight of the 2016-17 season will be the unveiling of a new storied Kings monument that will exist amongst the other legendary statues outside STAPLES Center. This monument – made of bronze, granite and glass – will serve to commemorate 50 years of Kings hockey. The exact public unveil date will be announced early in the season.

-The 50th Anniversary Celebration will conclude with the 2017 NHL All-Star Game at STAPLES Center. The game on January 29 is the highlight of All-Star Weekend (January 28-29) and features the popular NHL All-Star Skills Competition and NHL Fan Fair.