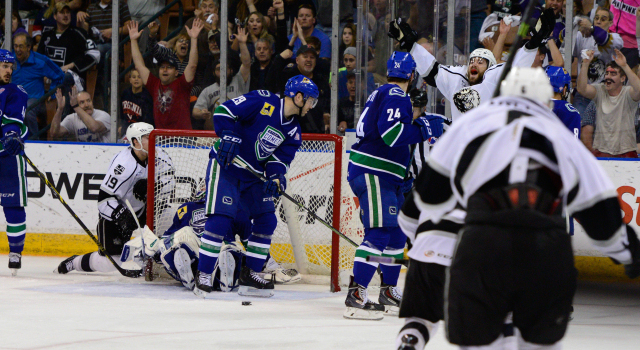 The Kings and AEG announced on Wednesday that the Manchester Monarchs have been sold to Boston-based PPI Sports, LLC. The Monarchs will continue to operate as the ECHL affiliate of the Los Angeles Kings.

In a statement, Kings President, Business Operations and Alternate Governor Luc Robitaille said, “The Manchester Monarchs are a tremendous organization with a deep history of success both on and off of the ice, and the LA Kings and AEG would like to thank the City of Manchester and the Monarchs for 16 successful years of affiliation. Despite the transition of ownership, the Kings look forward to maintaining our relationship with the new ownership group of the Monarchs and continuing the development of LA Kings prospects in Manchester.”

There has been a remarkable amount of regular season success in Manchester, where the Monarchs have never finished with a points percentage of below .500 in any season. Between 2001-02 and 2014-15, the AHL-based Monarchs operated with a points percentage of .595, qualified for the playoffs in all but one season and won the Calder Cup in 2015. After the transition to the ECHL, the 2015-16 Monarchs finished 39-24-4-5 and lost in the first round of the playoffs to Adirondack. Los Angeles prospects who appeared in more than a handful of games for the Manchester in 2015-16 were Maxim Kitsyn, Alex Roach and Alex Lintuniemi; neither Kitsyn nor Roach received qualifying offers this summer and thus are no longer property of the parent club. Kitsyn signed earlier in the off-season with KHL-Nizhny Novgorod.

Monarchs president and Manchester native Matt Welch will remain the team’s president, a role he inherited when Darren Abbott was named as the President/Governor of the AHL’s Ontario Reign in the affiliation swap.

Said Welch in a statement: “This is a very exciting next step in the evolution of our franchise. I’m energized by our new ownership group’s commitment to the success of our franchise and even more so by their desire to play a key role in the community. Professional hockey in Manchester is in good hands for many years to come.”¬

From the New Hampshire Union-Leader:

The Monarchs, about to embark on their second season in the 28-team ECHL after 15 years as an AHL team, were one of only two teams in the league owned by NHL franchises. The other is Adirondack, owned by the Calgary Flames.

The deal was initiated by Casper, said Welch. “PPI came to us. We received a phone call in February asking if the Kings were interested in selling. We said, ‘With the right situation, we’d be willing to look at it.’”

The sale of the club is subject to approval by the ECHL’s Board of Governors, which is expected to happen later this week.

For more context of the city of Manchester’s relationship with the Monarchs, click here for Last Chance at Calder, a story I wrote during the club’s 2015 Calder Cup championship run.

All games in the 2016 World Cup of Hockey will be broadcast on ESPN, ESPN2 or ESPNEWS, ESPN announced on Wednesday.

Here’s to hoping there’s a reprise of this memorable theme:

And suddenly we’re all fired up to watch Ziggy Palffy and Felix Potvin go head-to-head with Joe Sakic and Peter Forsberg.

Group A consists of Canada, the Czech Republic, the United States and Europe, while Group B consists of Finland, Russia, Sweden and North America. Europe is a team comprised of players born outside of the participating European countries, and North America is a selection of players from the United States and Canada who are under 23 as of October 1, 2016.

In previous World Cups, the United States defeated Canada in 1996, and Canada defeated Finland in 2004.

Steve Levy and Barry Melrose will call all of the United States games as well as the semifinals and the final, while John Buccigross and Kevin Weekes will broadcast all other games. Brett Hull, Chris Chelios, John Saunders, Adnan Virk and Buccigross will provide studio analysis. All games will also be streamed live on WatchESPN through an affiliated video provider.