For Kings and Dodgers fans, Ruehle’s presence a win-win 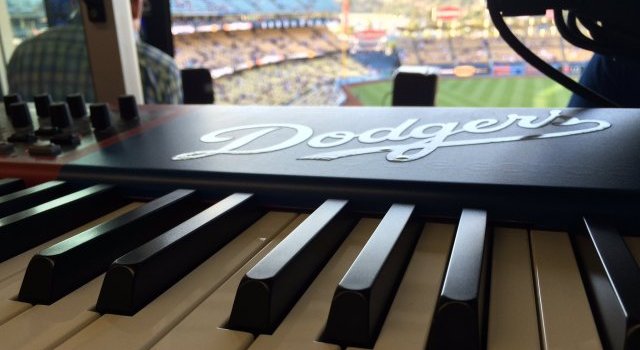 Dieter Ruehle, whose current tenure as the Kings’ musical director dates back to the final year at the Forum, also overlapped with Wayne Gretzky during an earlier stint with the organization between 1989 and 1992. In other words, you’ve been hearing him entertain fans on his Roland Organ well before he learned the Game of Thrones theme.

This summer, however, Ruehle has traded in his Roland A-90 for a Nord Electro 5, generously provided by the Los Angeles Dodgers during an upgrade of their game operations that culminated with Ruehle’s hiring prior to the season. So there’s no real off-season for the admired and tenured organist who grew up in North Hollywood and Burbank with a love of both hockey and baseball. There are, however, fewer layers to be worn when attending his current place of employment.

“One’s a little bit intense, the other’s a little more laid back, though in saying that, hockey can have its duller moments and baseball can have its intense moments,” Ruehle said. “I think at the end of the day, it all sort of balances out.”

Ruehle notes that he doesn’t have to keep track of any sort of a clock in baseball. “I think in hockey, it’s pretty rare to go nine or 10 minutes without a music break, whereas in baseball, it’s the opposite.” But games at Chavez Ravine do surpass the three-hour mark fairly regularly, and while Dodger fans have a reputation of arriving late and leaving early – Southern California’s expanse and regional traffic patterns play a role in that – he isn’t able to allow his mind to lose its acute focus like the vast majority of those in attendance.

“I watch pitch-by-pitch and just pay attention because you can never know when something could happen,” he said. “For example, if Clayton Kershaw or any Dodger pitcher is throwing a strikeout, then that third strike, I’m playing Beethoven’s Fifth on the organ. So if I don’t pay attention, or if I walk away, then I’ll miss that. I definitely pay attention pitch-by-pitch, and I enjoy it.”

It all balances out. While he hasn’t laid down the in-house score during key moments of championship runs, as he has with the Kings, he is treated to a view that does surpass that of the Staples Center rafters.

“The view of the San Gabriel Mountains, the view of Mt. Wilson, every day that’s one of my favorite things about being there,” he said. “I enjoy the fact that baseball doesn’t have a clock and the pace is just very organic – whatever happens at whatever pace.”

Having grown up “back in the days of Garvey, Lopes, Russell and Cey,” it’s a perfect complementary position to his responsibilities with the Kings, which are comprised of a few additional duties. He also chooses the pre-recorded music during games at Staples Center, whereas at Dodger Stadium his primary responsibility is to play the organ after having assumed the role following the retirement of beloved organist Nancy Bea Hefley.

There are several additional songs that he has had to learn – for instance, he doesn’t play It’s a Beautiful Day for a Ball Game at Kings games – though the same ethos of playing organ does apply. He’s respectful to the geography and history of the opposition, and just as he is quick to play former Hartford Whalers anthem Brass Bonanza when the Carolina Hurricanes are in Los Angeles, he’s also well prepared to share his respect to the Dodgers’ visitors.

“They have it scripted to where the organ is playing under the visitors’ starting lineups, and I figured when possible, perhaps I could play something that would fit and acknowledge the visiting team,” Ruehle said. “So when the Mets were here earlier this season, I learned how to play Meet the Mets. I got all sorts of positive feedback on that from people who recognized it. I’m sure perhaps most fans didn’t know what that was, but if you were a Mets fan, or if you happened to know the song, you would recognize it and hopefully it would bring a smile to your face.”

His repertoire has grown organically. Instead of using sheet music, he prepares and practices new material by ear and some trial and error.

“I used to rely on sheet music, but then I discovered that the sheet music wouldn’t be printed out in the exact key that the original song was recorded in, and that kind of bothered me. It didn’t feel like it was very honest,” he said. “When I play a song, I want it to sound as close to the original as possible, so then I started learning by ear, and I knew it would be more accurate that way.”

The respect of Ruehle’s work crosses borders. A veteran of five Olympic Games, Ruehle’s music has been heard well beyond the boundaries of Staples Center and the USTA Billie Jean King National Tennis Center, where the U.S. Open is held. He’s been to Sochi, Vancouver, Turin, Athens and Salt Lake City, but because of his role with the Dodgers won’t be heading to Rio de Janeiro later this month to assist in presenting the 2016 Summer Olympics.

“I guess on one hand it is kind of hard, because I know the Olympic experience is very special,” he said, noting that while he’d love to go to South Korea in two years, the 2018 Pyeongchang games are simply too far in the future to know whether his services will be requested.

“On the other hand, I am relieved to stay home and do something that I love, which is work Dodgers games. So it really is a win-win situation.”

For Dodgers and Kings fans, it certainly is.

Earlier this afternoon, Bob Miller and the Kings presented Vin Scully with his own Kings jersey in commemoration of his legendary career. FOX Sports West and the Kings will have footage of today’s meeting, which will be posted here on LAKI.