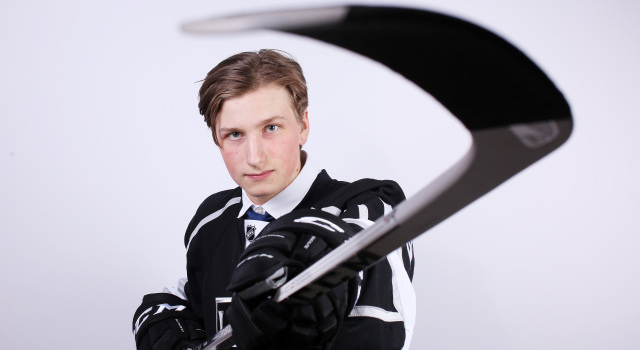 You may remember several scouting reports arising on Moverare from the NHL Draft. He’s the player who has the IQ and awareness of a first round pick but has deficiencies in his skating, which the Kings are eager to address. Director of Amateur Scouting Mark Yannetti, who said that “he’s got the highest hockey IQ of any defenseman in the draft,” used several comparables to outline the work ahead with the soon-to-be 18-year-old.

“The one thing I pride obviously the most is hockey IQ, and our staff balances each other out with what our go-to assets are,” Yannetti said in Buffalo. “So for me, that’s obviously the most intriguing, but for a guy with that hockey IQ to be there then, there’s a serious deficiency. So, can we fix his skating? And that’s the age-old question in hockey. Tyler Toffoli. Why’s he at 47? Well, can we fix his skating? We could. Michael Mersch. Can we fix his skating? Well, that’s a work in progress, and we certainly haven’t fixed it yet. Again, you’re going to take the calculated risk that you can improve his skating to get an asset that is only available in the top 15 picks.”

Based on correspondence with hockey operations, it’s “most likely” that Moverare will play this year with OHL-Mississauga, who drafted his rights in May’s CHL Import Draft. Though there are often questions of whether European-based prospects report to their major junior teams – such agreements are often finalized through discussions between the player’s agent, the CHL team’s front office and, if applicable, the NHL team that drafted the player – Mississauga’s head coach is James Richmond, who is also serves as a member of Los Angeles’ development staff. It should be expected that Moverare will play in the Greater Toronto Area, where the Steelheads were 33-30-2-3 a season ago but should improve as they continue to receive dividends from five players selected at the NHL Draft, including four players taken with the first 81 picks: Alex Nylander (Buffalo / 1st Round), Michael McLeod (New Jersey / 1st Round), Nathan Bastian (New Jersey / 2nd Round), Sean Day (New York Rangers / 3rd Round) and Austin Osmanski (Buffalo / 7th round). The incubation process, which includes a highly regarded Swede in Nylander, appears highly appropriate in Mississauga, given Los Angeles’ ties and the team’s burgeoning talent.

In conversations with Los Angeles’ scouting staff at the draft, it was shared that Moverare will take part in Sweden’s national junior team evaluation camp, which will be held at Compuware Arena in Plymouth, Michigan in late July and early August. Sweden recently announced its roster.

In development camp last week – his first trip to Southern California – he illustrated many of the aspects that stood out during his scouting process, including poise, intelligence and highly regarded decision-making with the puck. The 6’2, 198-pound left-shot defenseman ranked 12th among international skaters in NHL Central Scouting’s final rankings and 9th in the midterm rankings.

“The biggest thing I need to improve is my skating,” Moverare said at the draft. “I really need to get that to a much higher level, so that’s the main focus I’m going to have in training, and also get stronger. But the biggest focus is my skating.”

Moverare spent the majority of his season with HV71’s U-20 team, with whom he totaled five goals and 21 points in 41 games. He also spent shorter periods with the parent club and HV71’s U-18 team. In seven games with Sweden at the U-18 World Championship, he recorded one goal and five points.