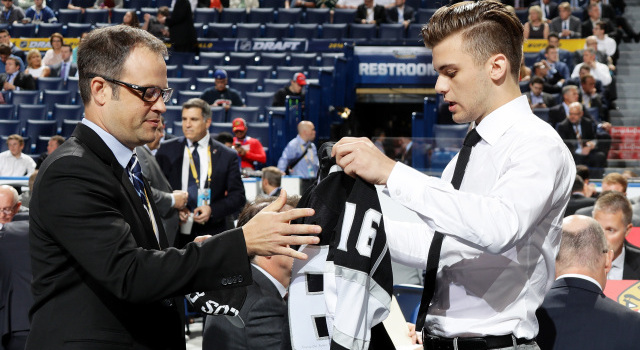 There’s a heavily used observation by scouting and hockey operations staffs of players who’ve been selected by their teams at the NHL Draft. We Can’t Believe This Guy Was Available Where We Were Drafting. It may be true, because no two lists are alike, and there will always be players who fall in the draft every single year. But it is used frequently after the draft by virtually every team in the league.

“Once again, ‘just happy to help the ball club,’ ‘we’re just going to put our pants on one leg at a time.’” Los Angeles Kings Director of Amateur Scouting Mark Yannetti said of other familiar sports euphemisms. “Yeah, it’s the worst, most awful cliché of the year, and then you and I sit here, and I say it every year.”

Perhaps it applies to Kings defenseman Kale Clague, a skilled puckmover who was available when the team selected 51st overall at the NHL Draft. Clague, who got off to a so-so start with the WHL’s Brandon Wheat Kings when the season began, ultimately compiled a strong body of work that culminated in 43 regular season points, a WHL Championship and a trip to the Memorial Cup. TSN’s Bob McKenzie projected him as the 30th pick in the draft.

“He’s been decorated with all the Hockey Canada teams, et cetera, the Under-17s,” Vice President of Hockey Operations and Director of Player Personnel Mike Futa said. “He’s somebody that’s an excellent puck mover, offensive threat. I was joking with (former Wheat King) Ron Hextall, and I guess there’s a little bit of a downfall that he’s a Brandon Wheat King. Hexy didn’t like that. He’s won as well. He’s an excellent skater, high offensive IQ, an excellent, excellent skater. When you see the game, it’s about skating, moving the puck. He was a winner this year. Obviously with Brandon winning the WHL championship, which was key for a draft eligible kid, he was a first power play guy, used in all situations. When you speak to the coaching staff, a kid of that age on a championship team at that level that’s being used in all situations, it’s a huge bonus. So, very excited that he fell to us. Not having the amount of picks, it was more difficult to move up and down, and that was a kid we were considering moving up for, so it was a lot of satisfaction being able to grab him, having a pick, after our last night and starting at 51.”

So there was some surprise that Los Angeles was able to nab such an intriguing prospect once many other big names were off the board, but there was more surprise at the gridlock in trying to maneuver up and down on the second day of the NHL Draft in Buffalo.

“The strange thing about this draft was how hard it was to move,” Yanneti said. “The toll charge was no toll charge in some of the moves now. A fourth for a fourth next year? I’ve never heard of that. So our phone was not ringing, and when we’re calling, we’re getting ‘nos’ or no calls back. So when you start to see a guy like that slide, obviously he’s a guy that we would not have expected, and he’s a guy that we actively would try to move up to get. The surprise for me, every year, three guys, five guys slide. Every year. So we can sit here every year and I can tell you that exact cliché. The surprise for me is we weren’t able to be proactive to go attack him. That would be the biggest surprise for me. But, again, if we’re right, which you don’t know, but if we’re right, fortune will smile on us.”

Mark Yannetti, selecting Jacob Moverare, a more traditional stay-at-home defenseman, in the fourth round:
Absolutely. Jacob Moverare, in my opinion, he’s got the highest hockey IQ of any defenseman in the draft. Now, unfortunately, he also has an equally deficient attribute, and that’s his skating. The one thing I pride obviously the most is hockey IQ, and our staff balances each other out with what our go-to assets are. So for me, that’s obviously the most intriguing, but for a guy with that hockey IQ to be there then, there’s a serious deficiency. So, can we fix his skating? And that’s the age-old question in hockey. Tyler Toffoli. Why’s he at 47? Well, can we fix his skating? We could. Michael Mersch. Can we fix his skating? Well, that’s a work in progress, and we certainly haven’t fixed it yet. Again, you’re going to take the calculated risk that you can improve his skating to get an asset that is only available in the top 15 picks.

Yannetti, on drafting another player out of St. Cloud State:
Isnt’t it funny? Every time I look at the guy, I’m like … do you scout anywhere else? And I read the things, too. Don’t get me wrong, because I look for trends. We draft all these guys in the OHL. We don’t go into it looking to draft guys from the OHL. It’s funny. … I don’t know if it’s a latent, subconscious thing that we’re drawn to, or if it’s just absolute lightning strike. The other thing, too, and this is more serious, we’ve obviously had success with kids there, and they obviously develop kids there. They’re a winning program. Some of the intangibles that you want these kids to have to deal with, in terms of having to win, pressure to win, and the ability to be in a situation to win – there’s a reason a lot of guys get picked from North Dakota, too. There’s a reason a lot of guys get picked from BU traditionally, and BC. Again, there are factors that do play into it. We’re comfortable, and they’re now a preeminent program in college hockey.

Yannetti, on Mike Eyssimont’s package:
Skill. Skill, skill, skill, skill, skill, skill. Goalscoring touch, good hockey IQ, skating. Maybe a shade undersized. He’s not quite like Nic Dowd – Nic crossed developmental age as a whole lot younger, and just standing next to him, you see it. So Mike is a little bit like that, as well.

Michael Futa, on Jacob Friend:
Just an old, throwback-type defenseman. Real hard-nosed guy. Competes. … Got to work on his feet. He’s not a bad skater – just got to get a little bit quicker – but he’s a kid that’s not afraid to muck it up, kind of like that Matt Greene mentality as far as an excellent penalty killer that’ll lay the lumber on you. He defends well and just plays hockey the way it’s supposed to be played. Real passionate guy. We’ve had success in the later rounds with the MacDermids of the world and some guys that really compete hard, like Jordan Nolan, and this guy’s compete level is off the charts. There’s a lot to work there with our development team, so we’re pretty excited about Jake being there as well.