For Kopitar, a natural progression of responsibility 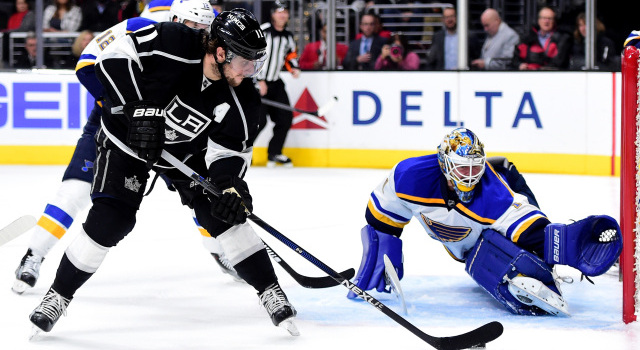 The Los Angeles Kings are not embarking on a “new era” in the sense that there would be any radical change in culture, or competitiveness, or the identity or makeup of a team that retains a high percentage of players who have won at least one Stanley Cup. But entering the 2016-17 season, there are vastly different circumstances and histories when compared to the surroundings and expectations from the year in which Dustin Brown was named captain. Though there is little to revere from the last two years, Los Angeles isn’t exactly coming off a season in which they were buried in last place in the conference, eight points behind 14th place St. Louis.

“We do not feel the need to change our identity,” General Manager Dean Lombardi said. “Our problem lies in not having certain roles fulfilled.”

He was answering a question about perceived team speed, but by referencing no change in “identity”, he may as well have been speaking about the expected fluidity in transition of the captaincy from Brown to Anze Kopitar. There will be no vast differences in leadership – Kopitar has long been a team leader and previously referred to as a “captain” – but rather learning and improving from a “vulnerable” environment, as Lombardi described it, in which the team entered the playoffs and quickly exited them.

Does Kopitar’s captaincy represent any major breakthrough or fulfillment of a corner turned? No, and there’s still plenty of work ahead in shaping the roster and furthering the buy-in this fall. But change can be a good thing, and while he admitted a “sweet and sour taste in my mouth,” Kopitar understood the gravitas of the moment and was excited to continue to place his own impression on a team already buoyed by strong leadership.

“Every professional athlete wants to be a leader and wants to be the guy that everybody is depending on in key moments,” he said. “That obviously comes with the play on the ice, and if you can just add the C letter to your jersey, that’s a great honor. I love challenges and I love going up against the odds. I’m pretty much the only Slovenian guy that’s ever played in the NHL and I beat those odds, in my mind, pretty good. I’m definitely up for challenges, I’m obviously very driven with this and this is going to give me another boost of confidence and another perspective of what kind of person and player can I be going forward now.”

And as Lombardi had done earlier in the day, he called to attention the most accomplished captain in franchise history.

“Let’s not forget, Brownie took us to two Stanley Cups so those are big shoes to fill,” Kopitar said. “It will be hard stepping in, I get it, but at the same time I’m very excited about it.”

Kopitar may have been the favorite to assume the captaincy, but there were other potential voices the team considered.

“This is something that we were watching all along,” Lombardi said. “Where is Kopitar? Where is Doughty? Where is Quick? How’s Muzzin coming? Martinez? All these kids have grown, but certainly the ideal situation is when that top player who plays the equivalent of maybe a quarterback position, which is usually your number one defenseman, your number one center. So, it’s probably safe to say that the guys who we will be trending towards on the assistant captains would have certainly been considered for this, but they were bred for what they’re going to be doing, too.”

“It sucks you can only have one captain, per se.”

That relates back to leadership emanating from many areas of the room, as Darryl Sutter will remind reporters from time to time throughout the season. With Kopitar, the decision to sew a “C” onto his jersey came from ongoing conversation between the center and team management.

“When we knew this was going on, we had a number of meetings with Kopitar and talks with him that [were about], ‘You know what you’re getting into? You want to do this job? Well, here’s the way we see it,’” Lombardi recalled. “So, to answer your question, I think it’s probably safe to say when we name the “A’s,” you’ll probably see the guys that were also in the mix. And they’re all worthy of this. It’s their turn.”

So don’t be surprised to see Drew Doughty named as an alternate, and players like Alec Martinez and Jake Muzzin continue to ascend the ladder among the team’s leadership committee.

With his experience of having already worn a letter and emerged as a top player in the league, Lombardi sees Kopitar’s captaincy as the natural progression in the duties the worldly accomplished two-time champion has undertaken.

“He’s been bred for it, he’s been trained for it, he’s one of our top players, and essentially he’s moving into his prime and it’s his turn,” he said. “That’s the way we look at it – somebody else’s turn to assume this responsibility.”

And though it’s early, Kopitar still identified the tenets of direction that he hopes he’ll embody as captain.

“Being a leader and being the guy that other players are looking up to and can depend on. I’m not necessarily the loudest guy in the locker room and obviously try to lead by example and doing all the stuff right on and off the ice and everything that come with it, and hopefully the guys can follow.”

Kopitar, on being named the captain, and if it’s at all awkward:
The initial thought obviously it’s a very exciting day for me being named captain. It’s something that during Brownie’s time I’ve never given it a whole lot of thought obviously because I always looked to him as being our guy. It’s a bit of, I guess, sweet and sour taste in my mouth just because he and I are very good friends and have developed a strong relationship over the course of my 10 years in L.A., and quite frankly he’s the only guy that has been there right when I got to L.A. I wouldn’t say awkward, it’s just maybe a little bitter, but I don’t think our relationship is going to change. I’m still going to need him right beside me, too, to obviously help me out with a lot of stuff and hopefully we can just manage and continue working together.

Kopitar, on if he envisioned that there would be a shift in the captaincy during this offseason:
Obviously the last two seasons for us have been disappointing, there’s no secret to it, and I believe that our top guys – us – we didn’t perform to our potential and therefore we didn’t make the playoffs two years ago and we got eliminated in the first round this year. So, it just simply wasn’t good enough. … Brownie, it’s the organization trying to find something, somewhat, give him some break and take some burden off his shoulders so he can find his game again. Again, I didn’t envision it but at the same time I’m super excited about it and I get it that it’s a great honor and with great honor comes a great responsibility, too. I’ve been around a little bit now, I grew in L.A., I’ve played with some guys that have been captains, have been great leaders on teams, and I think I’m up for the challenge.

Kopitar, on whether he will have any input on who the alternate captains will be:
No, I haven’t talked to anyone about that yet. I’m sure somewhere along the line now that’s going to come in play, but I don’t know how much of an input [for me] it’s going to be. I’m sure that there will obviously be a great discussion about it and I’ll be present in those talks, for sure.

Kopitar, on whether the team will still look at Brown as a leader in the room:
Absolutely. You can’t just throw away eight years of him being our captain. I believe it was eight years, I don’t even know, it’s been that long. For the guys not to look at him as a leader is very dumb because he’s been there, he’s won it. Again, he’s been a force for us it’s just the last few years – and he’ll be the first one to tell you it didn’t go the way he wanted them and hopefully he can get that back. As I said before, I’m definitely going to need his help and I’m going to need him by my side.

Kopitar, on anything he’d like to do differently as captain:
On top of my head right now, I can’t think of anything. I think we pride ourselves as an organization to have a strong, character room. I don’t think me coming in [that] there’s going to be some drastic changes or anything. The guys are trying to be themselves and that’s what we want them to be. Again, it’s not going to be different, there’s some minor details that you maybe do differently but I don’t think a whole lot is going to be different than it was.

Kopitar, on when he is taking part in for Olympic qualifying:
Not exactly sure but it’s beginning of September. It’s prior to the World Cup.