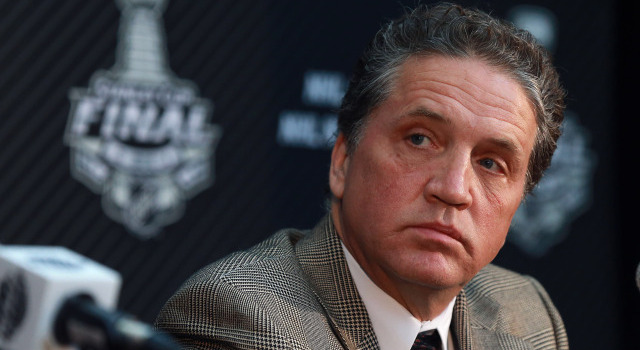 I’m not sure if the Venn diagram of Stephen A. Smith fans and Los Angeles Kings fans intersects beyond the borders of their respective circles, but Dean Lombardi has made it quite clear over the years that he’s thoroughly on board with the brash, provocative and at times offensive commentary espoused by the ESPN reporter and personality. He joined Stephen A. on Tuesday drew some interesting parallels between hockey and basketball and discussed the impact of the Rams on Los Angeles sports culture, and you know what? It was a really fun interview. (It’s not embeddable outside of Twitter, so you’ll have to click the link below.)

There’s some highly worthwhile commentary on fighting – “instead of waiting for the referee to deal with it, you feel like you have to deal with it to stick up for your teammate, and that’s a tough thing to legislate and a tough thing to say you don’t want,” Lombardi said of the origin of fights in today’s game – as well as NHL marketing, LeBron James and the realities facing the Kings this spring. In the end, Lombardi advocated that Stephen A. call out Skip Bayless for his Johnny Manziel advocacy, which was followed by Stephen A.’s declaration that Lombardi is his official “hockey guy.” This actually happened today.

Dean Lombardi on expectations, to Stephen A. Smith:
You see a guy like LeBron James, and I know how much you stick up for him. I have never seen an athlete – and I tell my players this all the time – the great players, they want expectations, and they deal with it. They don’t like being Cinderella, and that’s what I told our players after they won the first Cup. Now it’s going to be expected, and that’s a lot harder than when you can just sneak up on people. It applies to individuals, too, and I’ve heard you a number of times when you’ve talked about LeBron. Like, who else is considered having failed, can win MVPs and has to win it all, even though he’s been to the Finals six times? I find that type of insight fascinating, that this guy is one of the few athletes out there where the expectation bar is so high, that it goes the other way where a lot of people want to see guys like that fail. I’m like seriously pulling for him. Who has to deal with that?