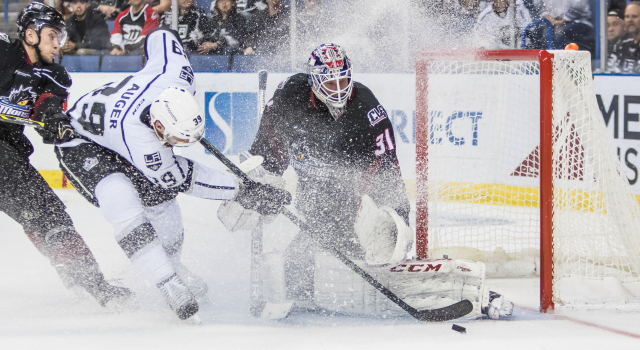 Nic Dowd, on the second period lull:
I think it happens across the board to a lot of teams but I thought our urgency was not there. You come out and it happens all the time, you see that teams … too little, too late. They have great urgency in the third period and they score a couple goals and they get close, they tie it up and come within one. It happens all the time, it’s just whatever it was there was a lull and they took advantage of it. They’re a good team.

Dowd, on Lake Erie taking away the middle of the ice:
I thought when we did get the puck in the middle the most important thing is just putting it into an area where we could give ourselves a chance to get it back. They have a couple defensemen that skate really well and if you give them a couple feet to grab the puck and head up the ice, your forecheck, you’re done. I thought when we did put the puck along the wall and we got in on the forecheck I thought we had success.

Dowd, on preparing via video and seeing Lake Erie live:
It’s huge. Obviously you try as much as you can to get ready for a series through video and obviously never playing them it’s challenging. I thought we did a good job on their penalty kill. I thought that when we started getting pucks in deep and turning their defensemen that we had success. Obviously now I think both teams have benefited from seeing each other the first game.

Dowd, on if Lake Erie did anything that surprised him:
No. It’s one thing to say a team is fast and then there’s another thing to actually play. We knew they had a lot of speed. We knew their back end was good. So, now I think playing against them and having the first game under our belt will only help us in the long run.

Dowd, on what the final minute was like with Peter Budaj pulled:
Urgency was great, made a lot of good plays and I think it was just too little, too late. You have to be like that the whole game in a playoff game and take advantage of situations and score big goals. Maybe it hits a post and goes in and we’ve got a whole nother game.

Dowd, on the importance of Sunday’s Game 2 and not going down 2-0:
This game is huge. Obviously each game in the series is big. When you ask me that for Game 3 and 4 and 5, I’ll tell you the same thing. We need to win in our building, that’s what it comes down to. We played for this all year, give ourselves this opportunity and now we’ve just got to take advantage of it.

Kevin Gravel, on Lake Erie’s balance of lines:
You need that when you’re this far in the playoffs. You need to able to throw any line over the boards, and we’re the same way. When things are going well you’re rolling all your lines, you’re rolling six D, four lines. Keeping guys fresh and turning things over. They did. I thought they did a good job of getting in on their forecheck, kind of pressuring us a little bit. Especially in the second period there. And that’s one of the strengths of their games and we knew that. I think we adjusted there in the third period and had a better period and gave ourselves a chance.

Gravel, on how he can explain what happened in the second:
They made a couple plays there. They had a nice line rush goal, the power play goal and a faceoff goal off one of our guys in front. … It’s just on us to knock it down and stay even keel. We do the same kind of thing where we go on a run there, pop a couple goals in and when things are going well you’re not thinking. When things are going bad maybe you’re thinking a little bit more in your head and it’s on us to just stay even keel and play. Things aren’t always going to go well for ya. And so what? They score three goals, it’s 3 to 1. You still have 20 minutes to play and credit to us, we did. We regrouped in the locker room and came out hard there in the third and gave ourselves a chance. Ultimately came up a little short but I liked our effort there in the third period.

Gravel, on Lake Erie’s speed:
They were fast. They’ve got a lot of skill up front. … They finished their checks on us as a group of D. They got a couple guys who can skate the puck out of their zone, too. And they did with Werenski and a couple of their guys there. We knew that coming in. We break down all the film but once you see it first person you get into it and make your changes and adapt.

Gravel, on the third period:
We finally started getting in on their guys and creating turnovers and scored a couple goals there.

Gravel, on the Reign’s defensive coverage:
If they break the puck out of their zone we’ve got to have a good neutral zone and kind of neutralize their speed. But it’s not going to happen every time. They’re a good team, they’ve got a lot of good players on that team. They’re going to get into our zone and they’re going to make plays and that’s OK. That’s why we work on our defensive zone coverage. They do a good job. They’re a good team. They’re one of the final four teams playing.

Gravel, on Lake Erie’s speed and gap control:
That’s one of the things when forwards have a little bit of speed sometimes you have the tendency to back off and play a bigger gap. Whether or not that’s the right thing to do, probably not, but that’s what speed does. It opens up space and it opens up lanes and they took advantage of that. They took advantage of that on their first goal there and they do a good job. They have a lot of good players. That’s one of their strengths is getting in on the forecheck and they’ve got a lot of guys who can make plays with the puck. We saw that tonight.

Gravel, on Lake Erie’s game-winner:
That was me on the ice there. I was just kind eyeing up with the D man and I tried to front the shot and it ended up going off my skate and right to [Alex Broadhurst] back door. Obviously maybe let Budes take that one, I don’t know. It’s kind of second nature to front a shot and just block it. You do it all game. Sometimes it ends up in the back of your net off your guy. It’s an unfortunate bounce but you’ve got to block shots, you’ve got to front pucks. … It’s second nature, you see a puck, you’re going to try to front it. You have no control over where it goes after you and unfortunately for us it went right on that guy’s tape back door and he buried it.

Sean Backman, on the second period lull:
Just mistakes that we made. You make mistakes in a playoff game, they’re probably going to score goals, especially in our own end like that. It’s stuff that we’ll take a look at and clean up and be ready for tomorrow.

Backman, on the ice conditions after graduations being held in the arena before the game:
It was slow but … they have to play on it, too. You can’t really use it as an excuse.

Backman, on the push in the third period:
Goalie out there, we had the extra attacker. A couple chances, Kempe hits the post. If that goes in there, who knows what happens. The way we battled back in the third after the second period that we had just shows the character of this team. It’s Game 1, we’re long from done.

Backman, on if it was nice to score his first playoff goal this season:
Yup. That’s an understatement.

Backman, on what has to be better for Game 2 on Sunday:
We’ve got to be relentless on them. We saw signs of it in the first and third there and we’re a tough team to play with when we’re playing heavy like that. Just minimize our mistakes and capitalize on their mistakes.