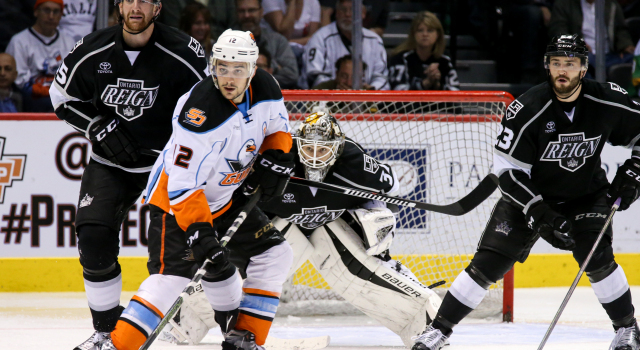 The Reign’s defensive system has been called robotic.

The stats of the postseason machine don’t lie:

“We just want to be as frustrating as we can defensively,” said defenseman Kevin Gravel. “We want to take as much time and space away as we can. And that starts with our neutral zone, too, and our forecheck. If we’re skating and getting on guys and clogging up lanes in the neutral zone, chances are they’re not coming with speed into our zone and ultimately that’s what we want. We want to take away their speed and keep them to the outside and make them funnel pucks on through the outside, not give them many point blank slot chances and I think we did a pretty good job of it last series and we have a lot of confidence in [goalie Peter Budaj]. If we can keep them to the outside he’s going to stop all those and he has the entire season.

“I think it’s one of the strong assets of our game is our defensive play and when we’re on our game we can be a pretty frustrating team to play against.”

The team to frustrate next is the Lake Erie Monsters, who the Reign face tonight in Game 1 of the best-of-7 Western Conference Finals at 8 p.m. in Ontario. The Reign have already sent San Jose and San Diego packing.

Consistent familiarity for the most part on the back end has been beneficial for the Reign. Gravel and Derek Forbort have been together most of the season. The same with captain Vincent LoVerde and rookie Kurtis MacDermid — with the exception when MacDermid was suspended early, and LoVerde injured late. Veteran Jeff Schultz has a bit of a revolving door of younger players in Kevin Raine, Nick Ebert and Zach Leslie.

“When you have a guy that you play with consistently you learn their tendencies and obviously you’re familiar with their game and know what they’re going to do and they know what you’re going to do,” Gravel said.

That extends to the forwards, too, where lines have shuffled but the responsibility for that group on that side of the puck flourishes just as well.

The Reign held a desperate San Diego Gulls team to just 16 shots in a 2-1 Game 5 win a week ago that closed out the series.

“The system that we play is the system that the Kings play and their coaching staff put it in and we try to mirror it. It can be pretty darn effective when you have everybody doing it, everybody buying into it. We don’t want to get into those end-to-end, back-and-forth track meets that some teams like to play. Our guys take pride in it. If we can keep a team to under 30 shots, that’s a pretty happy group in there. They take pride in that.”

It’s no fun to deal with for the opposition.

The Reign’s defensive play extends to another layer as their stalwart penalty kill, which is 27-for-29 in the playoffs.

Schultz attributes that success to the penalty killers “working as a good four-man unit,” and “creating chaos in the neutral zone.”

Said Gravel: “I think it’s just the will to get it done.”

They will have their hands full with the top power play in the playoffs, as Lake Erie enters with 18-year-old sensation Zach Werenski and a group around him that carries close to a 29 percent efficiency rating.

“In order to win games, you’ve got to win the special teams battle and a big part of that is your penalty kill,” said Gravel. “We have a lot of guys who are very unselfish players and will do whatever it takes, whether it’s blocking a shot or making that extra effort to get the puck out when you need it and get a line change. … I think our entire team prides itself on our penalty kill and obviously having Budes back there in net is a big help because when things start to go awry for us he’s there to shut it down for us, which is always very helpful.”

Added Schultz: “It’s a good momentum booster for us. We’ve been on a good run here so far and guys are really buying into what we’re doing out there and the other guys that maybe don’t kill use that energy from the kill and are ready for that next shift out there.”

Lake Erie is led by Werenski and his four goals and six assists. Lukas Sedlak, Oliver Bjorkstrand each have four goals as well and Josh Anderson has five. The Monsters are averaging a goal more per game than the Reign at 3.67 versus 2.67.

“Everybody likes to score. It’s a real challenge if you can prevent the other team from scoring,” Stothers said. “There should be as much pride in that as there is in scoring.”

PODCAST PREVIEW
On the drive to the game or this afternoon, I joined Jesse Cohen from the All The Kings Men podcast as well as a three other great guests to break down the series: