May 17 practice notes: Rested Reign get back to work 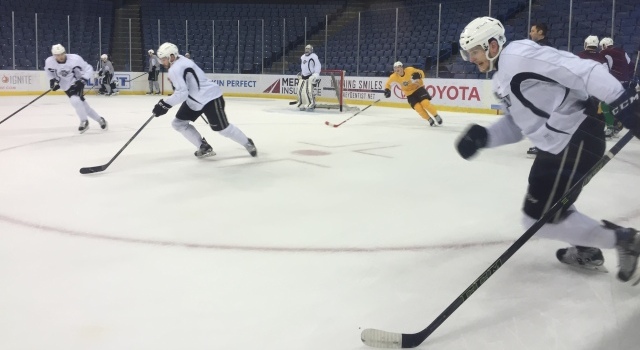 Some notes from today’s 10 a.m. practice at Citizens Business Bank Arena as the Reign prep for their Western Conference Finals matchup with Lake Erie.

–The Reign got back to business after two days of rest after closing out their series against San Diego on Saturday night in a 2-1 win. Practice lasted over an hour with the focus being breakouts, finishing, full-ice 1-on-1s plus conditioning at the end. The Reign have home-ice advantage for the upcoming series, which starts Saturday.

“It’s going to be great,” forward Justin Auger said. “We don’t have to worry about traveling at all this weekend. We just get the whole week to prepare. Limiting [San Diego] to five games was huge. We could have been playing last night if we didn’t close it off, so it was nice to get those two days off and come back this week and have a hard-working week of practice and get ready for this weekend.”

The Reign have lost just one game on home ice in the playoffs thus far. So, so far, so good. “I guess it’s good, that’s what we worked for all season long,” head coach Mike Stothers said of having home ice. “We wanted to have that advantage. Whether it is or not, who knows? But, we got a little bit of time before the next series starts, which is always beneficial in the playoffs. Get a little healed up. Gives you a little time to prepare. Gives the guys a little down time. They had Sunday, Monday off for recovery. We’ll play out the rest of the week and then it becomes very busy. You play Saturday, Sunday, Monday’s a travel day, you play Tuesday. And it goes on from there. It’s going to get real hectic so for the time being we’ll take this slower pace and maximize it.”

Had the Reign’s series with San Diego gone any longer, their potential Game 7 was scheduled for Wednesday. The break was beneficial.

“Physically I think guys can be at this point at the game be ready to go back-to-back nights and short notice, but I think mentally is the biggest issue,” said center Nic Dowd. “It’s good to get away from the arena and not have to put the equipment on every day.”

–Injured players Jonny Brodzinski, Brett Sutter and Kevin Raine did not practice and when asked if there was any update on the progress of each Stothers replied, “Nope, nope and nope.” Both Sutter and Brodzinski have not played since the opening round against San Jose and Raine has been out since after Game 1 against San Diego.

–Zach Leslie remained paired on the back end in practice with Jeff Schultz while Nick Ebert skated with Paul LaDue. When Raine left the lineup due to injury Ebert was first given the chance to play with Schultz in Games 2 and 3 against San Diego but was a minus-1 both. Leslie was inserted back into the lineup for Games 4 and 5, his first games in nearly a month. Stothers confirmed on Tuesday that Ebert, who has battled injuries from time to time this season, has been a healthy scratch.

–One of the better quotes of the afternoon was Stothers’ remark about Lake Erie’s star defenseman, 18-year-old Zach Werenski, the 8th overall pick by Columbus in the 2015 NHL draft who scored the game-winner in OT on Monday night to send his team into a meeting with the Reign. “I’ll tell ya what, he jumps out at you every time you watch him on video,” Stothers said. “As a matter of fact we had some video this morning and I called him Larry Robinson. Nobody in our room knew who Larry Robinson was. A little disappointing, but that’s what he reminded me [of]. He’s a big, lanky guy and he carries the puck and he’s up the ice. Boy, he’s a pleasure to watch. Obviously a guy that you’re going to have to pay special attention to and take away his time and space. They’ve got some other guys, too, so it’s not all the focus on him but he’s certainly come in much like probably Kempe did for us last year in the playoffs. Nobody knew about him and he comes in and everybody’s going to go, ‘ooh, Kempe,’ and maybe to a lesser extent this season with Amadio. Now people are going, ‘who’s this Amadio kid?’ He’s doing everything the right way. We’ll continue to watch for that.”

–Game 1 of the Western Conference Finals will be held on Saturday in Ontario with a rare 8 p.m. start due to graduations being held in the arena earlier in the day.