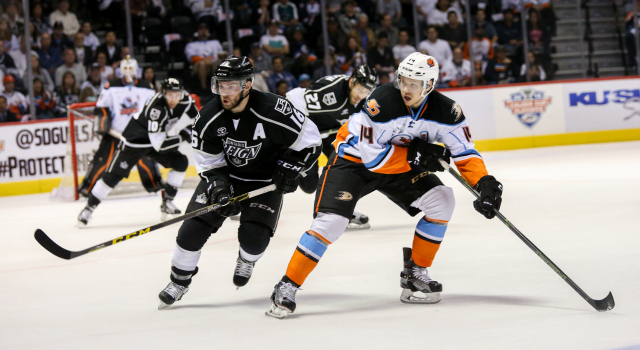 –The Reign have defeated the Gulls in the Pacific Division finals four games to one to advance to the Western Conference finals where they will meet the winner of the Central Division, either Lake Erie or Grand Rapids. Lake Erie leads that best-of-7 series three games to two with Game 6 on Monday. The Western Conference finals will begin next weekend in Ontario with Game 1 to be played Saturday at 8 p.m. and Game 2 on Sunday at 7 p.m.

–Ontario improved to 5-0 in the postseason when leading after two periods of play. The Reign are now 7-2 in the playoffs and 4-1 on home ice.

–The Reign’s PK finished a perfect 4-for-4 on the night to improve to 27-for-29 in the playoffs overall.

–Peter Budaj made 15 saves to improve to 7-2 in the playoffs.

–The Gulls were the only team to have a winning record against the Reign in the regular season at 8-4-0-0.

–The Gulls’ power play came into the series with a 25 percent success rating and scored two power play goals against Ontario in the five games, finishing the postseason with a 16.6 percentage.

–Justin Auger scored the game-winning goal on his 22nd birthday. He led all players on the ice with 5 shots on goal and has 3 goals and two assists in the postseason.

–Here’s how the Reign appeared in line rushes:

–Gulls D Stu Bickel, who left last night’s game due to injury in the third period, was out of the lineup and Joe Piskula was back in. Mike Sgarbossa played for the Gulls for the first time all series, returning from a lower-body injury.