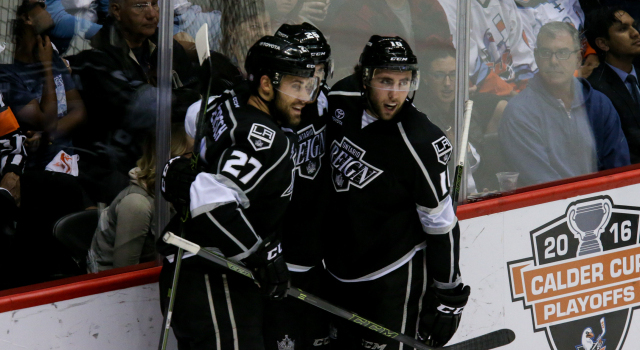 Reign game breakdown
Welcome to the AHL and welcome to your 20s, Mike Amadio. The Reign rookie scored the biggest goal of his young hockey career on his 20th birthday at 6:29 of overtime to give his team a 4-3 win on the road in Game 4 against San Diego on Friday. The Reign lead the series 3-1 with a chance to clinch it on Saturday night at home. Amadio one-timed the puck from the right circle and by Gulls goalie Matt Hackett after a Kevin Gravel shot bounced off the end boards and to his stick as Amadio jumped off the bench and into the play. It was his first pro goal and in his sixth AHL game — all coming in the postseason. The rookie’s heroics were made possible after a frantic back-and-forth third period. Trailing 1-0 due to a second period power play goal by Gulls defenseman Shea Theodore, the Reign tied the game on a Nic Dowd goal 3:47 into the final frame. Then, in a span of 3:04, the game opened up and featured four goals, all by the Reign’s Adrian Kempe and San Diego’s Chris Mueller. First it was Mueller at 11:02 who whacked a rebound out of the air and through Ontario goalie Peter Budaj. Just over a minute later Adrian Kempe answered by going opposite side, top shelf on Hackett while streaking down the right wing on a 2-on-1. Almost two minutes later it was Kempe again. When Dowd took the puck out from the left corner and to the goal mouth, Hackett’s poke check put the puck right to Kempe who backhanded it in. Mueller came back though as off the ensuing faceoff he took a stretch pass into the Reign zone and sent at shot through Budaj’s five hole just 10 seconds after Kempe had given the Reign their first lead to tie the game at 3. The game trickled into overtime game, the second game of its kind in this series, both resulting Reign victories and both on the front end of the back-to-backs. Budaj made 25 saves while Hackett had 33 in the loss. 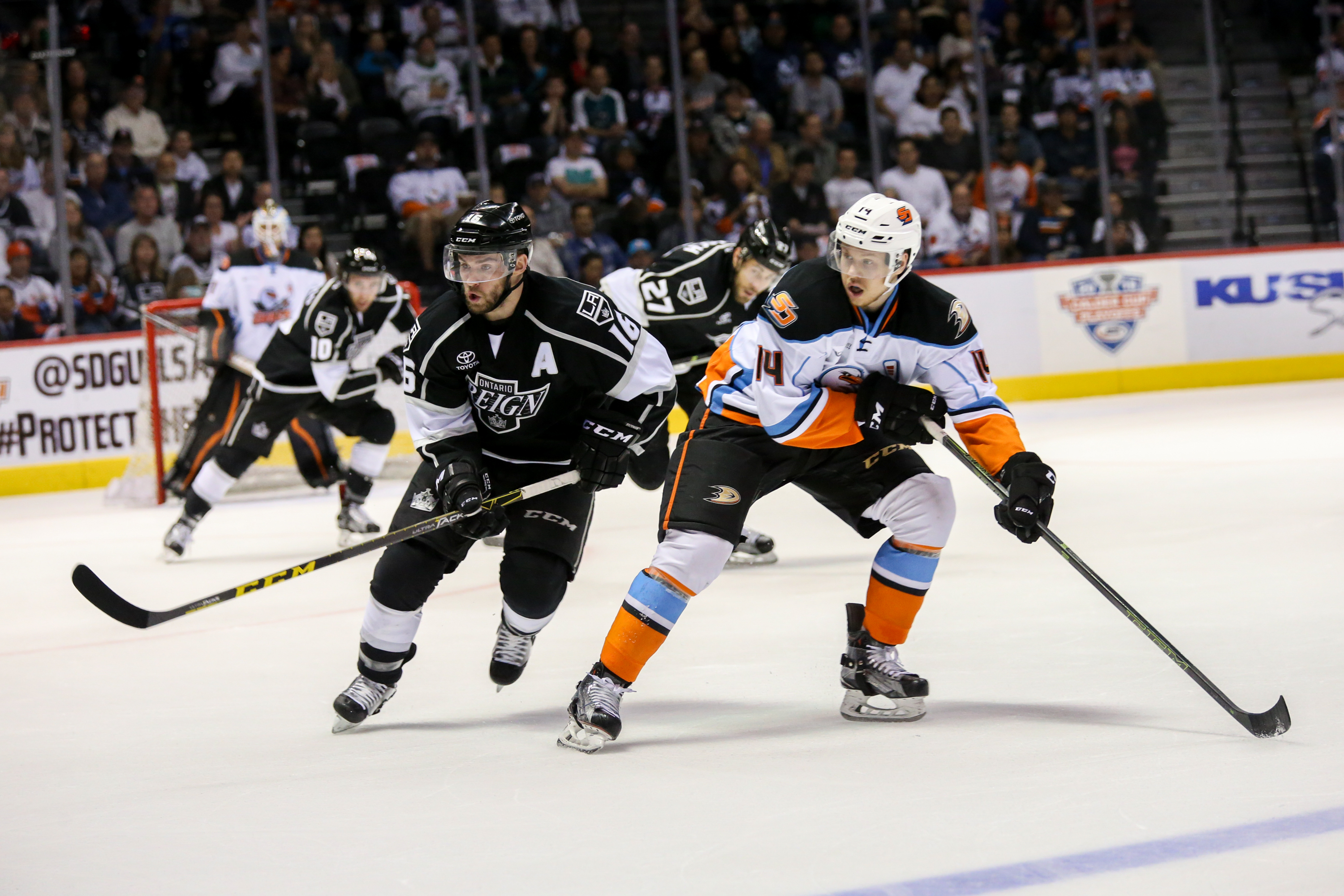 Three stars
–Mike Amadio – It hasn’t taken long for Amadio to fit right in. Originally subbing in at center in the absence of various injured forwards, the rookie fresh off his season with North Bay in the OHL is suddenly a constant in the lineup and is quickly gaining Stothers’ trust. “Man, he’s pretty calm and cool under pressure,” Stothers said. “Holy smokes. He’s a talented guy, you can see that. He’s just gone about playing like he’s been here all year. He’s obviously got some skill to be a play-maker and a finisher, but he’s also pretty good away from the puck.” Amadio said afterwards this is probably the best birthday he’s ever had and that he couldn’t remember ever scoring on his birthday before.
–Adrian Kempe – Kempe showed off his speed and skill in the third period and his four goals now lead the team in the playoffs. “He’s been really good for us in the playoffs and I think he wanted to kind of make up for last game there where none of us were very good,” Stothers said. “Again, the way he can skate, get up and down the ice. He’s got a great shot and he’s somebody that the opposition has to be aware of.” The 3-minute span in the third where both sides allowed their offenses to take over, was some of the most exciting hockey on display in these playoffs and Kempe was right in the middle of it. He had just three shots on goal, finishing two.
–Chris Mueller – The Gulls’ star forward factored in all three goals, scoring the two in the third period while assisting on Theodore’s in the second. Like Kempe, he scored on two of his three shots and his fourth goal of the playoffs just sneaked by Budaj, ending the Reign’s lead just as they got it. 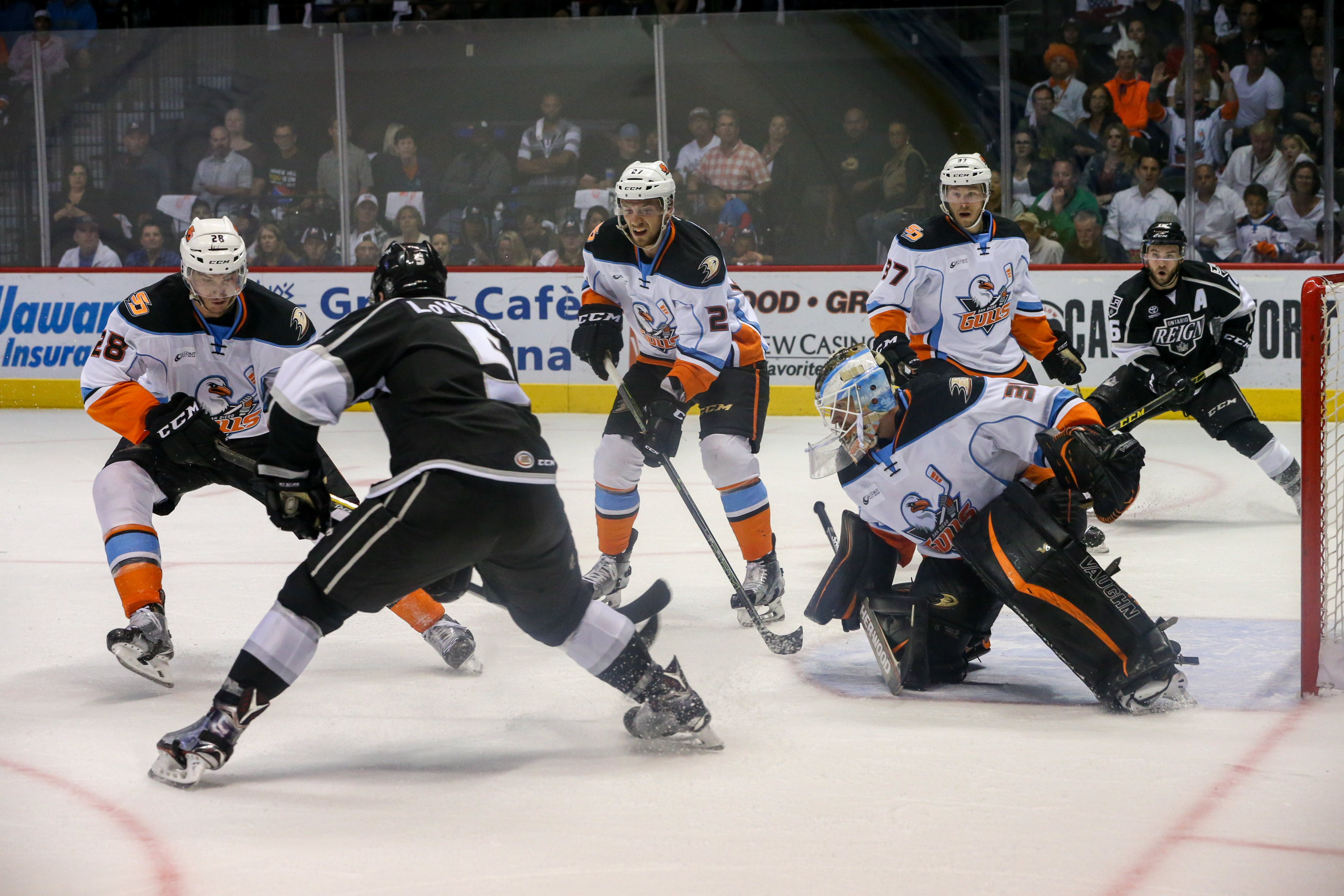 Turning point
The Reign killed all two minutes of a Kevin Gravel cross-checking penalty to start the third period and pushed their way back into the game 1:47 later when Dowd sent a wrister from the right circle past Hackett’s glove. Dowd’s third goal of the postseason broke Hackett’s series shutout streak that spanned over 100 minutes and set the stage for a busy third period.

Lineups and injuries
Ryan Horvat, who was cleared to play earlier this week, returned to the lineup for his first game since Game 1 of the first round series against San Jose. … Jonny Brodzinski, Brett Sutter and Kevin Raine are still out due to injury. … San Diego lost burly D-man Stu Bickel late in the third period to a lower-body injury suffered on a check by Justin Auger and did not return.

Stat fact
–0 – Shots on goal in overtime for San Diego.

This and that off-ice
Sean O’Donnell from the Kings’ development staff was in to watch the game. … San Diego had 9,078 fans in attendance.

Next up
We’re over the four-game hump in the 1-1-1-1-1-1-1 series and the teams face one another again on Saturday night in Ontario at 7 p.m. This is the last of the two back-to-backs scheduled in the series. 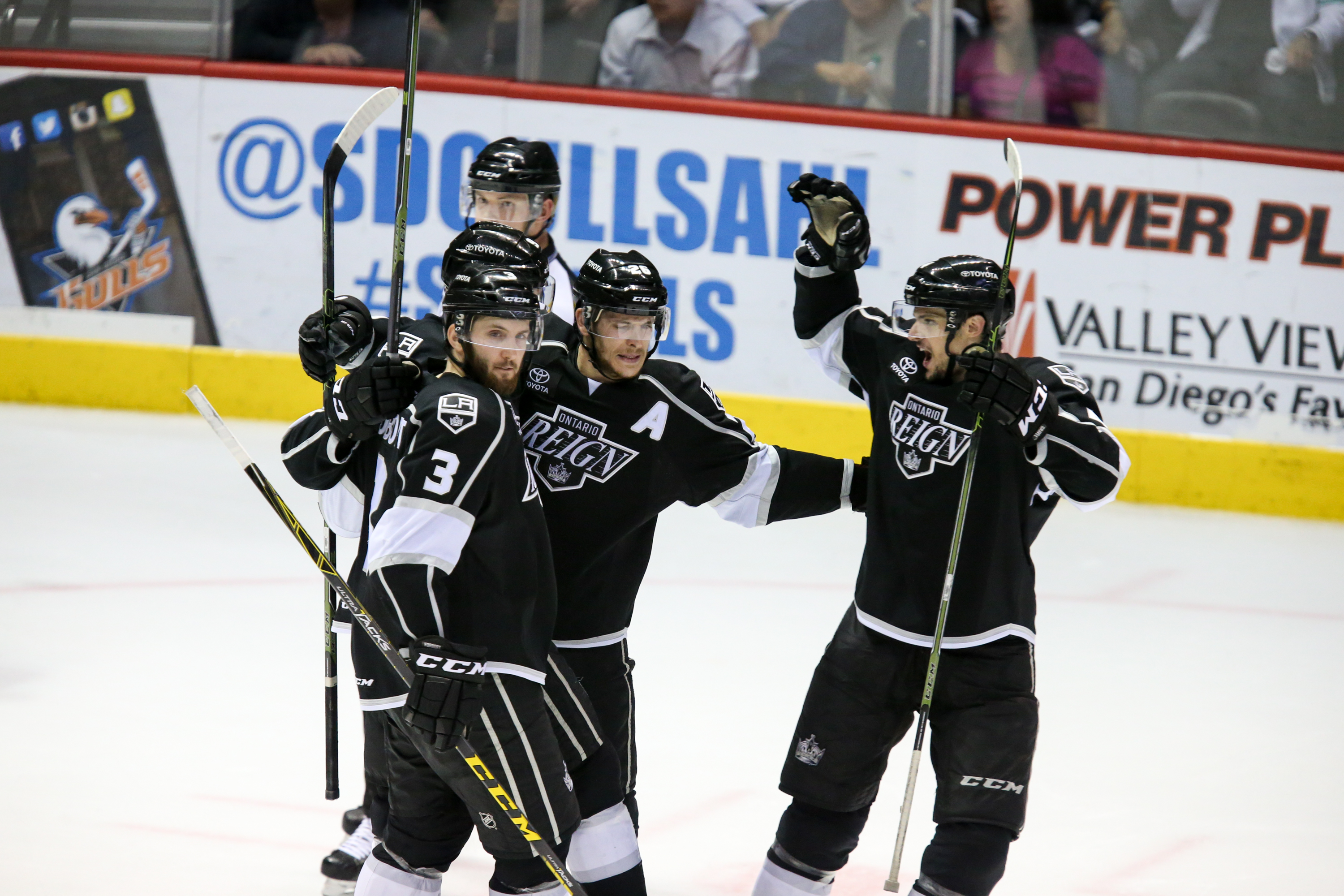