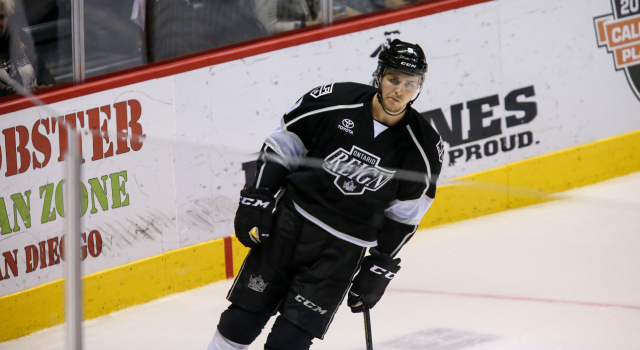 Amadio, on feeling comfortable at the AHL level:
I think so. After the first couple games I’m kind of accustomed to it now and I know what it takes and what the speed is like. I feel a little bit more comfortable and confident out there making plays.

Amadio, on where this birthday ranks for him:
Probably the best one so far, obviously.

Amadio, on the last time he scored on his birthday:
I don’t think ever. This is the first time.

Amadio, on if he has a preference of playing wing versus center:
No, whatever he needs me I’ll play. [Reporter: What do you see differently from each position?] I feel a little more comfortable and more freedom [at] center obviously being able to skate wherever on the ice. Wing is more of up and down but it doesn’t matter, you’ve got to be able to play any position all over the ice and you’ve got to be ready to fill lanes.

Amadio, on how he doesn’t get flustered:
I try not to get too down on myself when I don’t make a good play. I obviously try to stay positive and go out the next shift and do the best I can. [Reporter: But isn’t that difficult as a young player at this level with the excitement you must have?] I’m not really sure what it is but when you do that that’s when you start not playing your game and making more mistakes. I just try to keep calm, keep positive and play my game. [Reporter: Is that something you’ve always had or something you’ve learned?] I think I’ve learned in recent years. Maybe when I was younger I’d show a little more emotion getting back to the bench but I’ve tried to calm myself down and moving forward here.

Amadio, on forcing overtime:
They’re a good team over there and we obviously know that and we know that they’re going to come out hard each game so we’ve just got to be prepared and I think we did a good job when we were down 1-0 we knew that we couldn’t give up and I think our guys did a good job coming out there in the third to battle back.

Kempe, on Amadio:
He’s a great player. He had a really good year in the OHL, had a lot of goals. … I haven’t played with him before but he’s been doing great work for us in the middle. It’s hard to play center. He just came from the junior league right into the professional league. It’s hard right away but he’s done a great job for us and I’m really impressed so far. [Reporter: What impresses you?] Looks like he’s been playing with us the whole season. He’s doing a great job defensively, we know he’s good offensively. He’s big, strong, can take draws. He’s a really good player at everything.

Kempe, on his goals:
I just tried to chip it by the D on the first goal and I had a 2-on-1 and I wanted to pass first but then I saw the opening on the far side there so I just tried to get it over there. Not the hardest shot but it was good position for me. The second goal I gave Dowder the puck in the corner, he took it to the net, I just followed up behind him and I got a rebound, just tapped it in with a backhand. Two good shifts and we had a really good game.