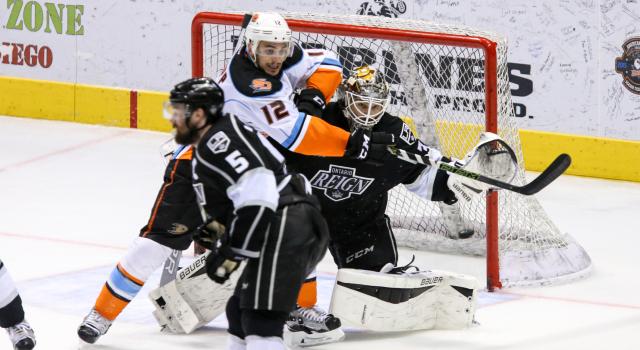 Justin Auger, on his game-winner:
It was a good faceoff win by Kemps there, something Stuttsy was kind of on us about, O-zone faceoff wins and making something of them. Good faceoff win by him first of all and then a good shot by the D there and puck kind of just bounced right on my stick and I took a whack at it.

Auger, on 2-0 series lead and the chance to make it 3-0 on Sunday:
We’re pretty confident. We’re an in-shape group of guys. We’ll be good tomorrow and we’ll be ready to go. Obviously it’s a quick turnaround but going up 2-0 is huge right now.

Auger, on the team’s confidence and how it played into beating Hackett:
We didn’t get one till the third there and we knew we were going to break him somehow and just throwing pucks at the net and bodies and one had to go in somehow. I believe it ended being tipped from the point and that was the 30-something-th shot. We finally broke him so we knew it was possible. We just kept throwing pucks at the net and we found a way to put them in. [Reporter: Are you guys talking on the bench about keep shooting, keep firing?] Of course. Everyone’s been watching the NHL overtimes and you see anything can go in. Every shot’s a possibility of going in the net. It could bounce, anything could happen. Any shot’s a good one.

Auger, on if last year’s run helps in these close games:
A big thing’s experience. A lot of guys on this team have been through four rounds, have been through winning a championship. Last time we went to overtime a couple times so we know what to expect and we know that everything’s magnified in overtime. One turnover, one shot, the game could be over. We know what to expect. We’ve been there before and I think that’s a big part, the experience factor that a lot of guys bring this year.

Auger, on the pressure he’s putting on himself to elevate his play in big moments.
Of course. Especially with Brodzy out of the lineup and Suttsy out of the lineup. A lot of guys are being asked to step up and play a lot more minutes than they used to. I knew I’d get my fair share of ice time in overtime and being able to put the puck in the net was big for us tonight.

Auger, on the San Diego crowd:
We knew they were going to come out with a big push and we knew it was going to be loud here. Their fans have been loud all year and they support their team well. I think all we can do is feed off that energy. It’s fun playing in front of a crowd that’s here to watch a good hockey game and they’re cheering. It helps you get pumped up and use it to your advantage and kind of pretend they’re cheering for you.

Auger, on the celebration of his goal:
I think I got a couple face-washes in there. I was actually surprised. I didn’t know it went in until everyone all started celebrating. I was kind of in shock for a couple minutes there.

Nic Dowd, on the big win and his thoughts of the game overall:
Going into the third game we’ve got to play tomorrow it makes you feel better knowing you won that game as opposed to losing, especially when you put so much energy into this game. I thought both teams played really well, I thought their goalie played really well. I thought our goalie played really well. Once again, special teams a big factor. Tie the game up, I technically consider their’s a power play goal, it was right at the end. That’s what you see. Auger a great play at the end from Gravel getting the puck to the net.

Dowd, on the Gulls’ power play:
They’re pretty creative guys. … They probably have a little bit of a plan going into it, I’m sure their coach gives them a pretty long leash and guys like Mueller and Montour, pretty good players, they’re just going to be creative and get stuff going.

Dowd, on taking away space for Mueller:
Obviously you’ve got to close a guy’s space like that. You give him time he’s going to make plays.

Dowd, on how the Reign can keep their momentum:
I think we’ve just got to play the same way. Have another good start. Be big on getting our fluids tonight and hopefully getting a little bit of sleep. This will be a mental game tomorrow. Guys will be ready to play physically but [we’ll] see how guys respond mentally.

Dowd, on Hackett’s performance:
It’s pretty challenging when a guy gets hot like that. Personally, he made like four or five saves against myself. It’s tough but that’s the only thing you can do is keep chucking pucks on net and hopefully good things will happen. Finally we get a tip and the puck goes in. There’s nothing you can do. The guy made great saves tonight and we’ve just got to continue to get pucks to the net. [Reporter: Is is tough to battle the frustration?] It’s obviously frustrating, but I think at this level you have to expect this in playoffs. You see in the NHL, you see in our league, goalies get hot, that’s just what happens, carry teams in playoffs. You have to expect that and you’ve just got to have the same mindset going into every game regardless of how he plays you’ve got to get pucks to him and then you’ve got to get rebounds. I think most guys at this level aren’t going to give up too many first shot goals. It’s the second opportunities as you saw tonight, Auger gets a rebound.

Dowd, on limiting San Diego’s chances:
I think our D men are playing really well. We’ve got a lot of big D men with a lot of range on their sticks and keep guys to the outside. I thought they did great. Pete, if something breaks down he makes a lot of great saves. I think keeping guys to the outside and Budes, 95 percent of the time, he’s going to make the first save and probably the second save. We put a lot of trust in him back there.

Kris Newbury, on his goal:
Just able to get to the point and my first instinct was get to the net and was able to get my stick on it. It was a big goal for us. [Reporter: A big relief too after the game Hackett was having]. Yeah, I kind of owed the team one after the one I missed in the first. I had a wide-open net and I’m not sure if it hit the post or crossbar. It was good to get that one. Got us back in the game and we’re able to grind out a win here.

Newbury, on the schedule and the chance to go up 3-0:
That’s playoffs. That’s the American League for ya. It works a little bit different than the NHL. We’re looking forward to the opportunity tomorrow. It’s good to get right back on the horse and try to get another one tomorrow and then we’ve got a couple days off after that. We can get our rest after tomorrow night.

Newbury, on what the Reign need to do to keep the momentum going:
We’ve got to have a good start tomorrow. We’ve got to come out guns-ablazing. Get on them early and just keep going from there. We’ve got to capitalize a little bit more on our power play. Tonight we had some chances and we didn’t even create momentum for the most part. Not all of it’s scoring goals, but to get momentum after power plays is huge.

Newbury, on him moving around in the lineup:
It’s playoffs. There’s injuries that happen. Guys are in and out of the lineup. Wherever they put me, I’ll play. I’m just trying to play my game, get in their face a little bit and create some offense when I can.