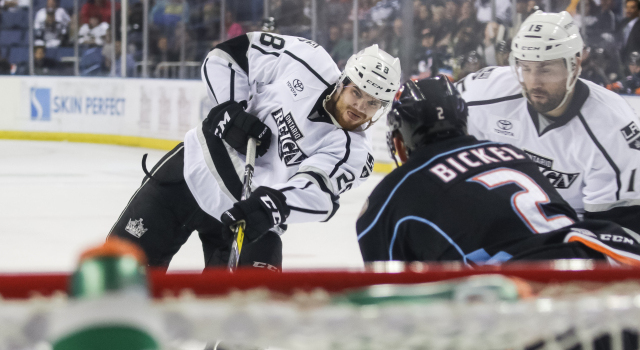 –The Reign improved to 5-1 in the playoffs and 2-1 on the road. The Gulls lost their first playoff game on home ice and fell to 2-1. Ontario leads the best-of-7 second round series 2 games to none with Game 3 on Sunday in Ontario at 7 p.m. The Reign will not hold a morning skate on Sunday.

–Peter Budaj improved to 5-1 in the playoffs, stopping 26 shots for his fourth straight win.

–With an assist on Kris Newbury’s goal, Mike Amadio has assists in the last two games. Newbury’s goal was his first of the playoffs and first since the second to last game of the regular season against the Gulls.

–Gulls goalie Matt Hackett’s glove was one of the highlights of the night. He held Reign scoreless for the first 41:39 and finished with 42 saves.

–San Diego’s Chris Wagner was called for a 2-minute minor charging on this hit on Sam Herr late in the second period. Herr had to be helped off the ice afterwards (Update: Herr returned for the third period). Video courtesy of Sheng Peng:

Wagner lucky to get just 2 mins for charging here, Herr was helped off pic.twitter.com/xHZDwSShTS

–Forwards Brett Sutter, Jonny Brodzinski and Ryan Horvat remain out with undisclosed injuries. On the back end, Kevin Raine was out of the lineup and Nick Ebert inserted into his place.

–The Gulls are started Matt Hackett in net again. No. 1 Anton Khudobin will miss his second straight game due to injury.

–Newbury finally breaks through Hackett at 1:39 of the third period on a power play deflection to tie the game:

–Auger’s game-winner comes at 11:55 of overtime as he buries a rebound of a Kevin Gravel shot after a clean faceoff win by Adrian Kempe: