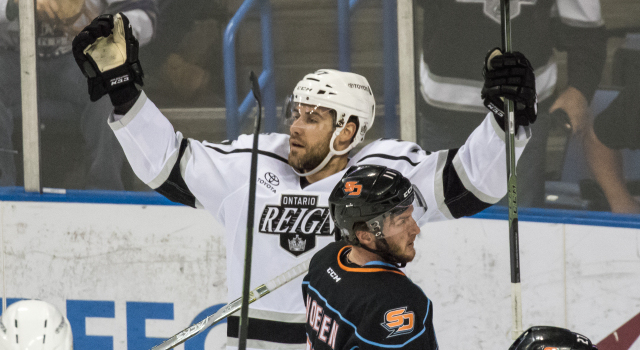 Reign game breakdown
Michael Mersch got back to Michael Mersch things and the Reign overwhelmingly controlled the special teams battle to take Game 1 of their best-of-7 second-round series with the San Diego Gulls by a 5-3 score on Thursday night in Ontario. The start was all Ontario, as it held the Gulls without a shot through the first 10 minutes and Mersch made the first mark at 10:26. The power forward scored in his bread-and-butter area — right at the goal mouth — collecting a Jeff Schultz shot from the left point and whacking it by Gulls goalie Matt Hackett. Then it was the power play, as Nic Dowd found a pinching Vincent LoVerde who put the Reign up 2-0 at 14:37. At the end of first, being outshot 12-4 and their backup goalie Hackett (starter Anton Khudobin is out injured) the outlook looked bleak for San Diego. But the Gulls turned their play around in the second, tying the score on goals by Kasse Kossila (a redirect that beat Peter Budaj five hole) and Matt Bailey (on a bid in the blue paint after a pass from behind the net) in the first 5:32 of the period. The Reign leveled out San Diego’s push with a their second successful penalty kill of the game and then took the lead on a Joel Lowry wrister from the slot after a solid forecheck and assist from rookie Mike Amadio at 14:37. The third was fairly quiet (SOG 6-4 Ontario) until Mersch scored his second goal at 9:11, a deflection of a Kevin Raine shot from the right side that skipped over Hackett. Down two and desperate, San Diego pulled Hackett and was successful with 2:23 remaining as Corey Tropp buried a puck that bounced off the end boards and to him at left of Budaj. That would be it though as the comeback try ended when Schultz scored an empty-netter with 33 seconds left in the game. Budaj made 16 saves in the win and Hackett took the loss with 24. 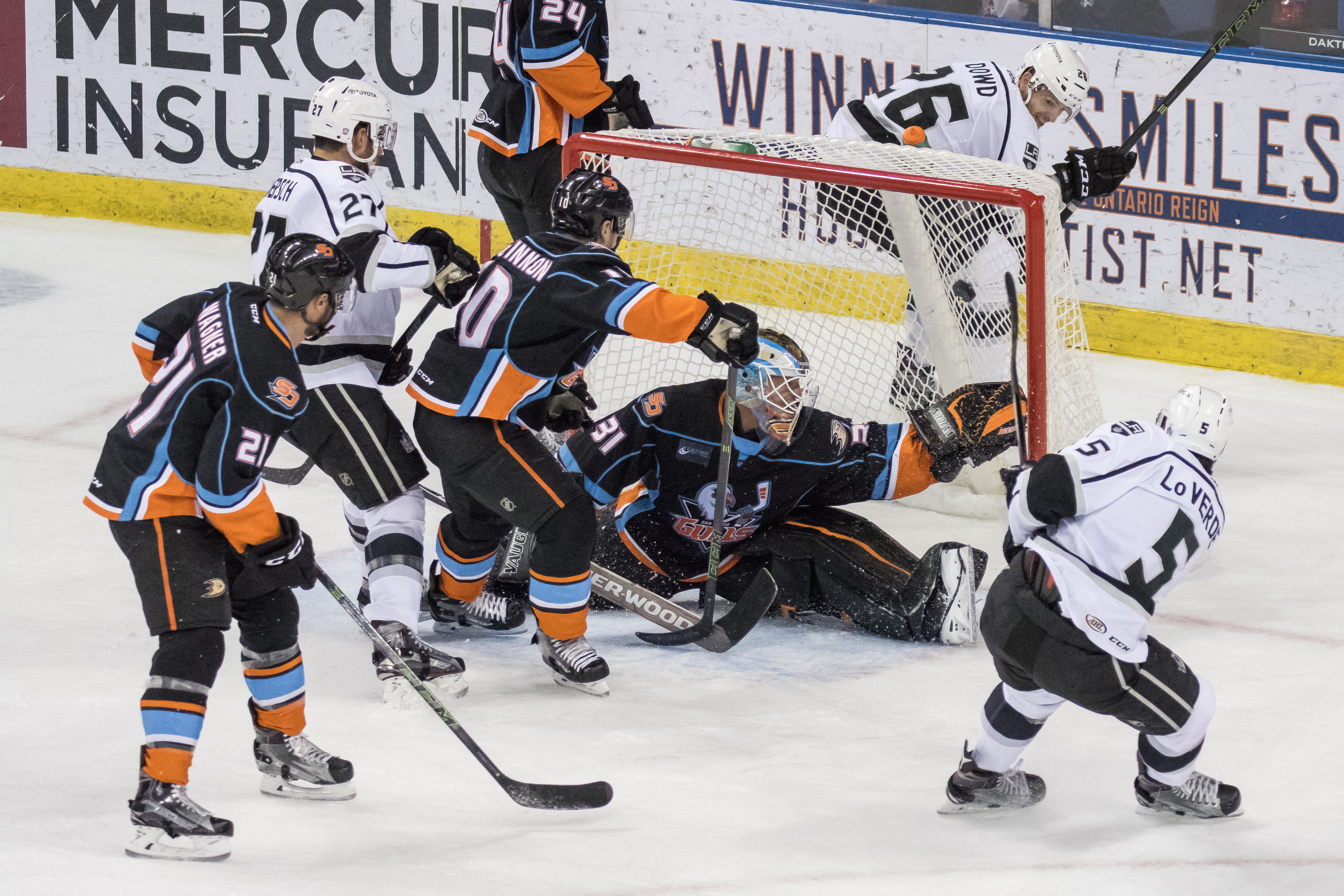 Best quotes
Mersch on his inspiration behind his two-goal performance: “It’s funny, my grandpa Mersch calls me every Tuesday and he asked me why I wasn’t going to the net so much in the first series. And he was like, ‘did the coach tell you to do that?’ And I was like, ‘no, I should probably start going to the net a little bit more.’ If my grandpa’s telling me, I probably should do it.”

And Stothers, when he heard about grandpa Mersch’s advice: “His grandfather told him that? Well, let’s fly him in. Put him on the staff. Perfect. Get him a track suit and he can go on the ice and practice tomorrow and I’ll stay off. Sounds like a plan. How old is he? He probably skates better than I do, anyways.” 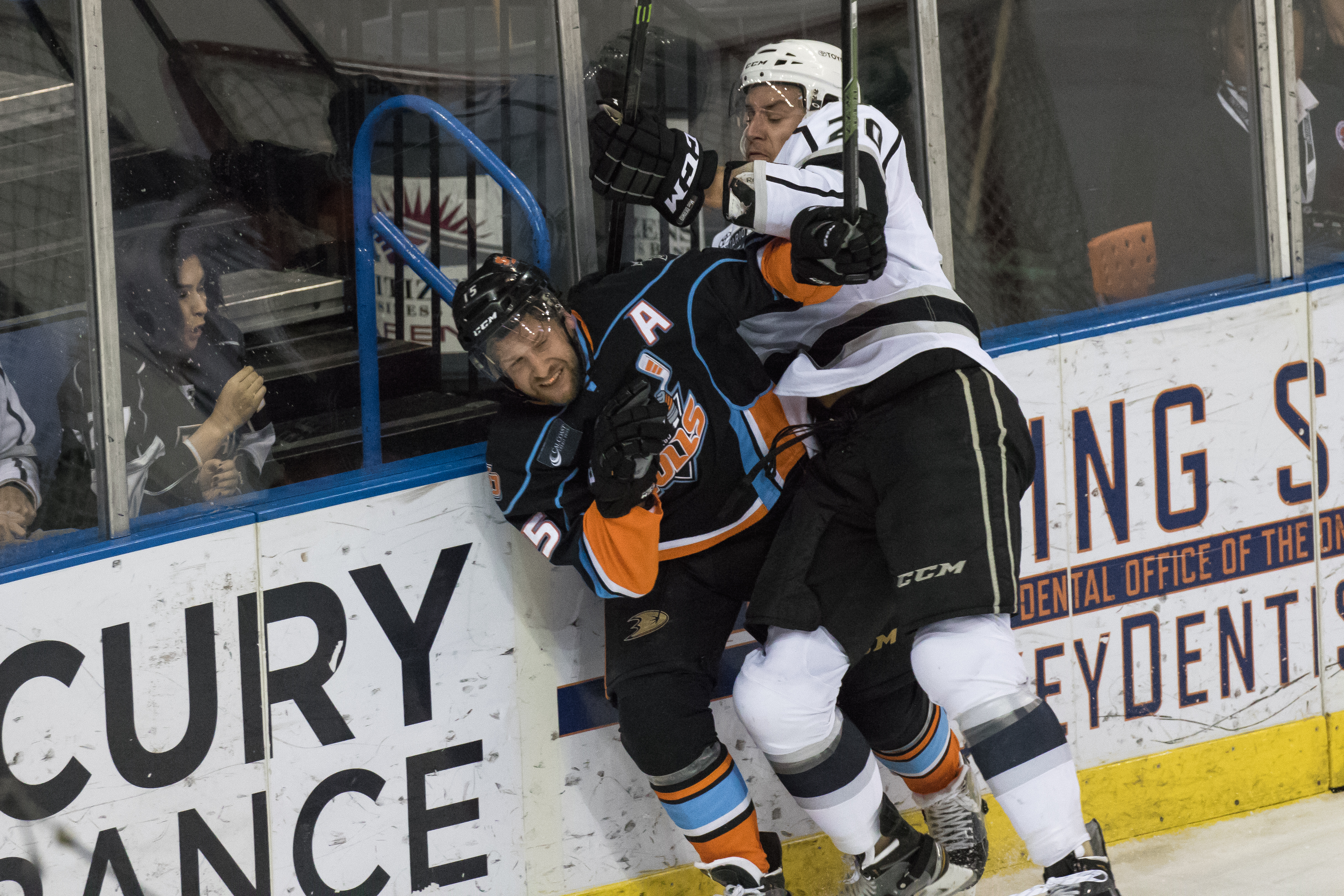 Three stars
–Michael Mersch – The team’s leading goal scorer in the regular season could not score in four games of the opening series win against San Jose. He was saving the goals for San Diego. Mersch smiled in his postgame interview, crediting his grandfather’s advice with helping him get on the scoresheet. Affectionately referred to by his coach as “Big Mike,” the burly left winger took over play in the front of a shaky Hackett and out-starred the Gulls’ stars. “It was good for him,” Stothers said. “And he’s been contributing in a lot of ways, he just hasn’t found the back of the net.”
–Special teams – When asked before the game what the one area the Reign needed to better the Gulls in Game 1 to win, Dowd’s knee-jerk reaction answer was, of course, special teams. In their strongest performance in that department all postseason, the Reign kept San Diego’s potent power play scoreless on all three of its chances to improve to a perfect 12-for-12 in these playoffs. Ontario’s PK against San Diego’s PP will be a story as the series goes on, but in this game the Reign won the battle cleanly and made the Gulls’ power play look average. Combine that with LoVerde’s goal after Dowd patiently drew in the Gulls defense before finding the captain free and Dowd’s prediction was spot on.
–The fourth line – The Reign were without Jonny Brodzinski, without Brett Sutter and without Ryan Horvat due to injury. The ones missing made it all the more important for the others in the lineup to contribute and Lowry and Amadio connected in the second period. Fresh off the bench, the rookie Amadio in just his third AHL game forced a turnover and caught the Gulls sleeping before finding Lowry, who just came over the boards himself, in the slot. Lowry — with Paul Bissonnette crashing the net — fired a shot over the glove of Hackett. “That was a great forecheck by him,” Stothers said. “The angle that he took on the guy he was going in on was terrific … and Lows comes off the bench, and Biss comes off the bench. You know what? As good of a play as it was from Amadio and the composure to give it to Lows, I thought Lows did a real good job of holding onto it for just a split second and then was able to throw it upstairs. Real good play by a couple young guys, and your line that goes out fourth.” 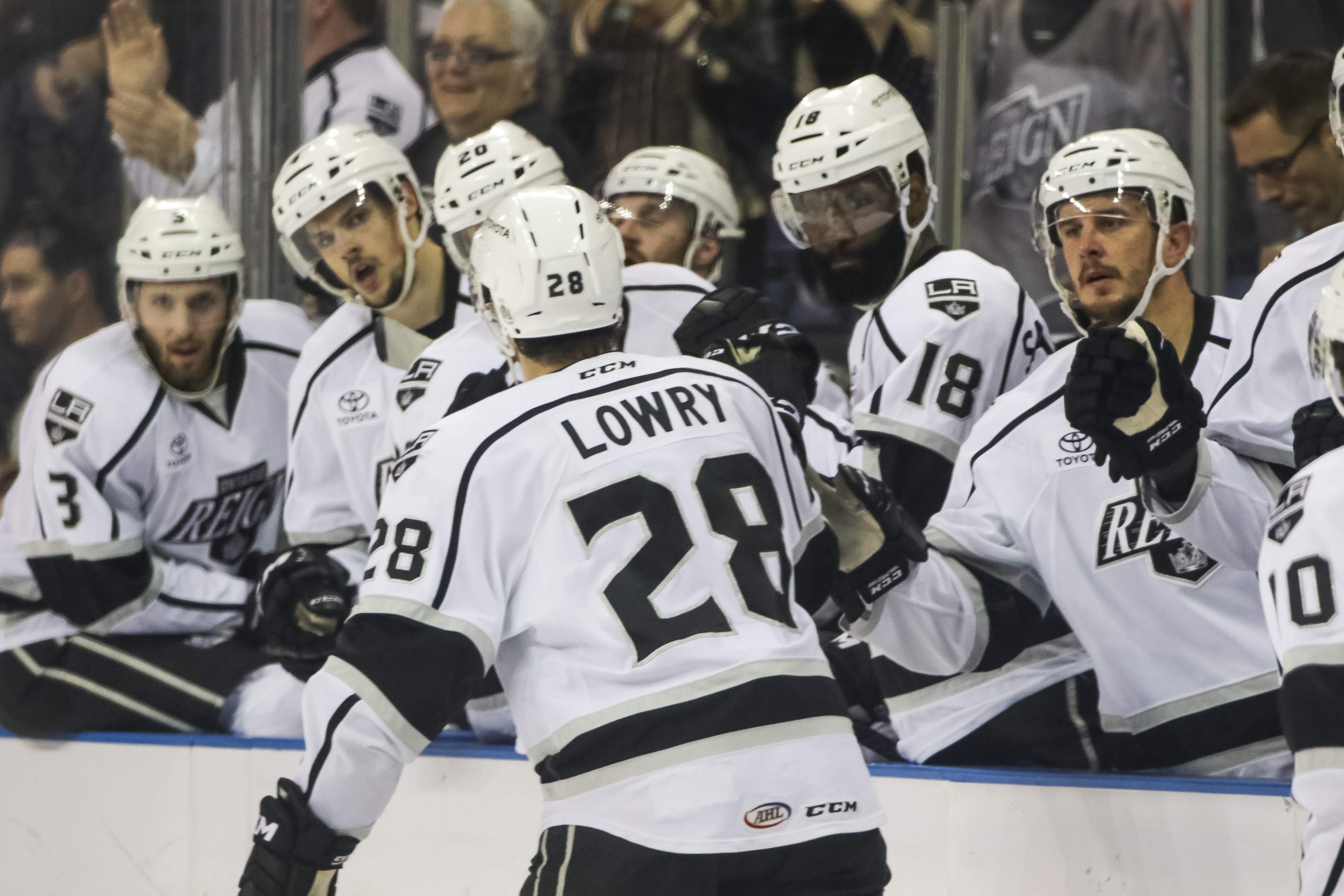 Turning point
In a chaotic play in front of Hackett, Amadio scored on a rebound of a LoVerde shot two minutes after the Gulls had tied it at 2. But the tally was instantly waved off as Bissonnette was called for interfering with the goaltender. While a fired-up Bissonnette stirred in the box the Reign’s penalty kill went to work and “saved me one there,” as the Reign veteran said after the game. The Reign used the turn of events to stop the bleeding and regained the lead later on Lowry’s goal.

Stat fact
–1 – Just one fight in what is expected to be a heavy series. Kris Newbury took on Corey Tropp on before the puck dropped at center ice after Mersch’s first goal. In all, there were just 24 PIM between the sides in a mostly tame game. “The emotion and the intensity of the playoffs sometimes get the better of you, and I thought both teams were pretty disciplined,” Stothers said. 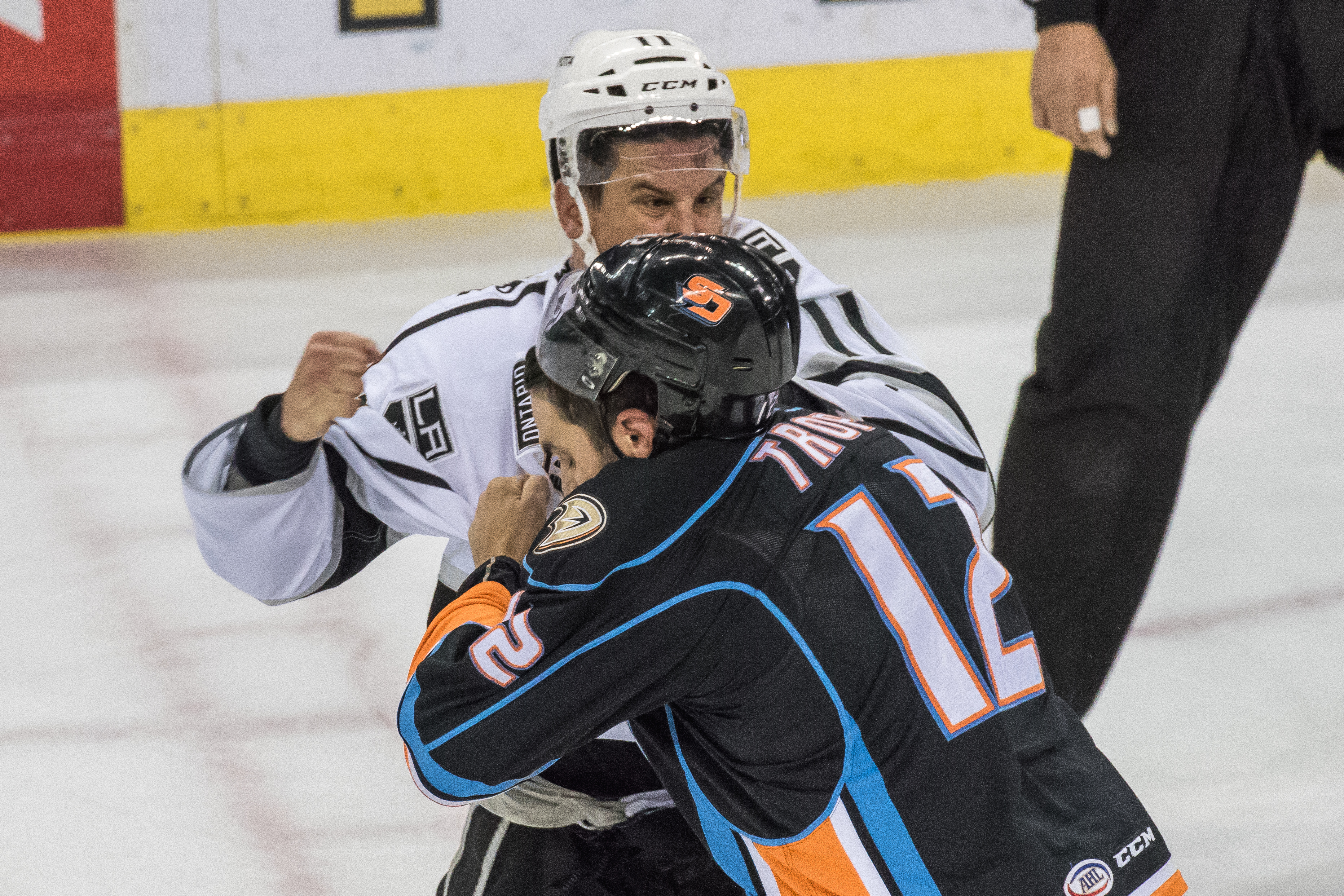 This and that off-ice
Kings head coach Darryl Sutter was in attendance and spotted outside the Reign locker room after the game. … Gulls center Mike Sgarbossa, who did not play, was seen watching the game in a walking boot by a media member. 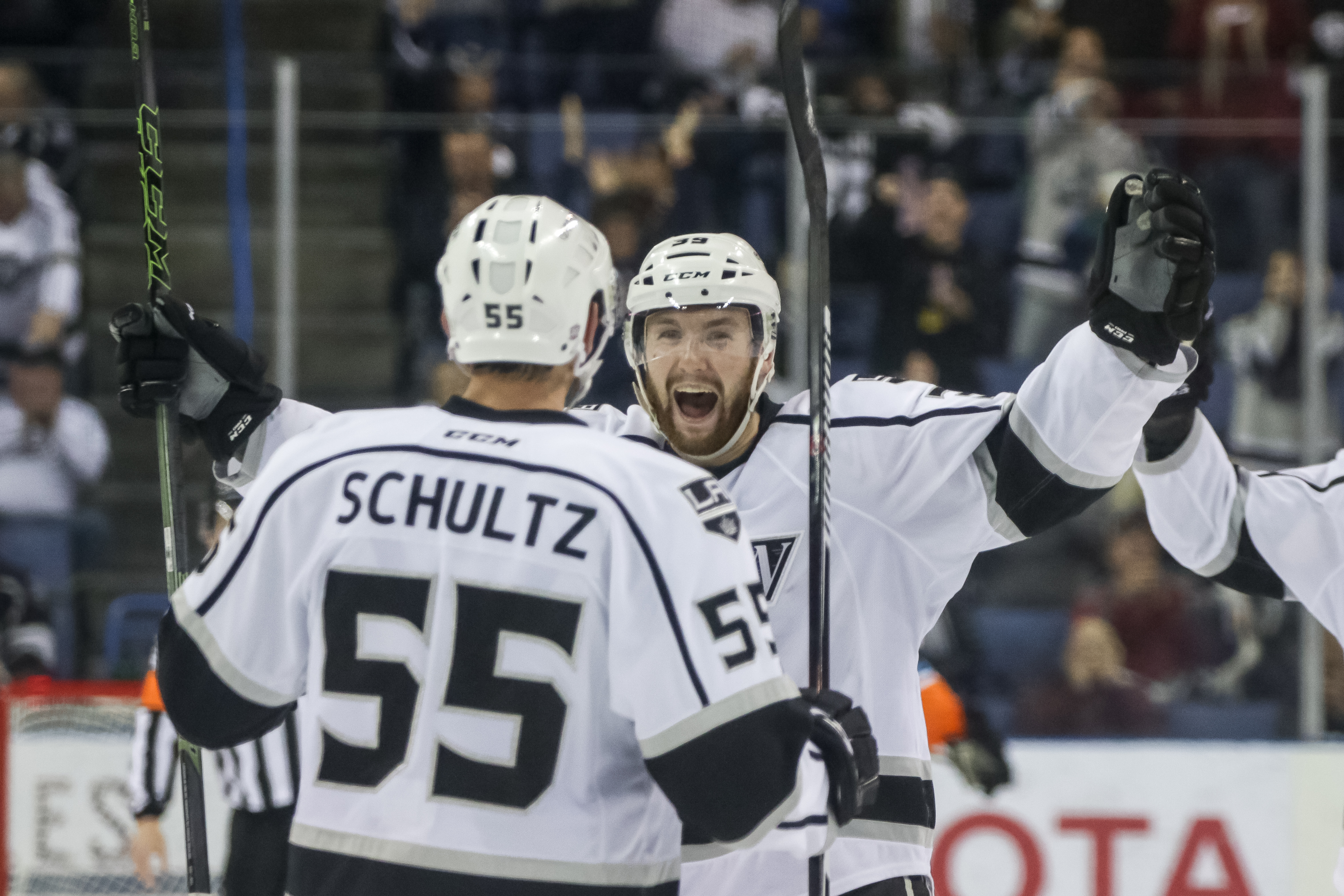