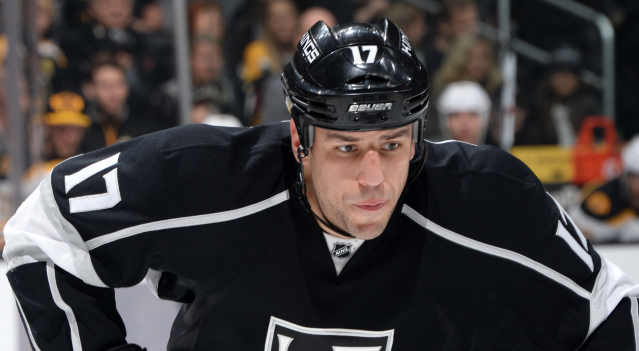 Asked about progress in negotiations with Milan Lucic and the Kings’ free agents, Dean Lombardi provided a truncated answer as part of a more comprehensive response.

On Lucic, he said he was “still working on it,” and added that he couldn’t “put a percentage” on any sort of timing on a potential deal.

“I think he’s a great kid, and there’s no question he’s a good fit, and probably that’s all I can say right now … There’s still some work to be done here, is probably the way I’d leave it at this point, so I wouldn’t worry about anything. I don’t see anything quickly here on the horizon right now, given some of the things we’ve got to work through.”

There are financial constraints. Los Angeles has allocated $63.143M to 18 players for the 2016-17 season, dollar figures that include Mike Richards’ cap recapture and settlement but not the $2.25M cap hit for Vincent Lecavalier, who is retiring. Teams may have up to 23 players on the active roster, while next season’s salary cap has been projected at around $74-million, assuming the players vote to implement the 5% escalator clause.

So considering the Kings should project to have roughly 10 or 11 million dollars of cap space and from two to five roster spots to fill, any allotment for Lucic will have a significant impact on both the central and secondary needs relating to roster construction.

“You know that dialogue’s going on, so there is a domino effect, so to speak,” Lombardi said. “…The discussions are much further along with Looch than anything else right now, as you can probably imagine, and then there’s going to be fallout one way or another with what happens there.”

But while negotiating with Lucic, the Kings are also shaping their approach towards re-signing other free agents, and it starts with a thorough review of the entire department and pinpointing where exactly improvement can occur from forces both inside and outside of the organization. Lombardi said that the coaches had recently finished their end-of-season reviews with the players, and that the “what went right” and “what went wrong” evaluations began on Thursday.

“I think we know there are some structural problems, right? We’ve talked about it during the season,” Lombardi said. “That’s a given. Now, how we’re going to address that, as well as some other issues, depending on players we can fit in, what you’re trying to do is say, ‘OK, the personnel side, we know there’s a problem, if this type of player becomes available. That’s a given. In the meantime what are the areas we can get better at regardless if we make any moves or no moves, and these are the things you try and outline and start your focus on now.”

It’s a much different approach than those undertaken in the past, particularly in the crescendo of the rebuild and the transition into becoming a league power in 2011 and 2012, and as the internal evaluation continues, decisions on personnel will ultimately be made.

“This is the first summer in a long time we’ve actually had the time to really break this down. It’s a necessity as well as the fact as we actually have some breathing space to do it right. So, that then ties into, OK, in terms of the other players you’re talking about, yeah, in a perfect world I’d take them all back, but we all know that’s not the reality, particularly the penalty for the winning is that our primary core has become like Chicago’s, and the Cap is not going up. So again, we’re going to have to make some adjustments here in how we do things. So to answer your question, I haven’t even gotten to [considering other re-signings] yet until we decide exactly where our biggest problems are that we can fix internally. That’s a different question from ‘you go out and get this.’”

Part of these evaluations should indicate, in some form, that the team will need to reinforce its defense, which became perilously thin in the postseason when Alec Martinez was felled by a groin injury and players slotted up a rung defensively. Brayden McNabb is a 25-year-old restricted free agent who, despite growing pains at times in his second full NHL season, has a high ceiling and will necessitate some of the purse set aside beyond anything potentially claimed by Lucic.

On the other hand, it should not be lost that the team did set a club record with 48 regular season wins, and that the core of Anze Kopitar, Drew Doughty and Jonathan Quick is as good as virtually any other team’s core.

“Again, I don’t think we’d be on different pages if you were sitting here playing assistant GM, saying, ‘OK, Dean, you need to add this.’ But if we can’t, we still have to find a way to get better in numerous other areas. Then that lends itself to, ‘OK, let’s prioritize this signing, that signing,’ and then you’ve got the whole issue of how much the agent wants and everything.”

So, again, there are abbreviated and expanded topics regarding the team’s off-season approach to personnel. Is Lucic re-signing? How else can the team make itself better?