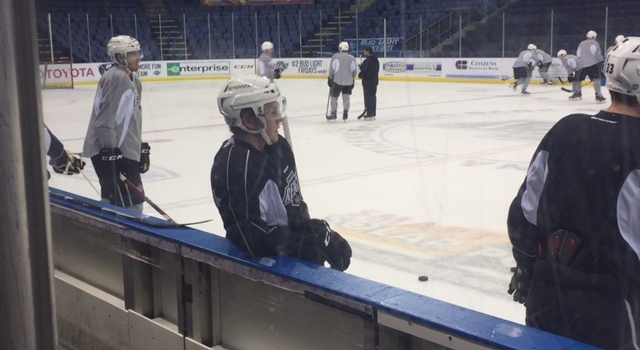 Nic Dowd, on the main focus in practice this week:
I think our breakouts are going to be important. This team does a good job getting in on the forecheck and they’re a physical team, so I think breaking that, getting out of the zone clean will be good. And getting out of the zone with our speed and keeping our speed through the neutral zone and into the O-zone will be important.

Dowd, on the layoff between games:
I think it’d be best to keep the emotions going and keep the momentum going, but that’s just how the American League is set up. I think guys enjoy the time off because it gives you time to recoup because playoff series take a lot out of you, but at the same time, it’s good to get back into it.

Dowd, on the one area the Reign have to beat San Diego in tonight:
I think our special teams will be huge. Both on the PK and on the power play. Those win playoff games, which obviously result in wins in the series. You saw last series they went 3-for-7 in Game 4 against Texas and that won them the game. I think both sides of the puck that special teams will be really important.

Dowd, on keeping their emotions in check:
I think everyone has their own approach to the game. Some guys play right on the edge. It’s challenging for some guys, which is part of their game. It’s challenging for them to maybe not step over the line, but that’s the game. Stuff happens quickly. I think that we have guys that play right on the edge there and I think that’s a good thing. But at the same time this team does have a really good power play and either our penalty kill’s going to have to match it or we have to stay out of the box.

Paul LaDue, on what the last 24 hours have been like:
I actually got to town late last night, around 9:30. Just getting my stuff ready. Excited to be here and ready to start working with these guys.

LaDue, on the relief of finally being under contract:
It was a tough decision but I’m glad I’m here and like I said, I’m excited to work with them. I’ve been waiting for this for a while and it feels good to be here.

LaDue, on any first impressions:
Tough to say, this is my first skate. But it was tough out there. Just one thing I noticed is guys are bigger, they’re faster. But at the same time it’s good for development-wise and hopefully I’ll be ready soon.

LaDue, on what he’s been up to since winning the NCAA title with UND:
I’ve been finishing up my school. We had a couple days to celebrate there and then just get all my schooling done and set it up for next year and get out here.

LaDue, on what he can apply from his championship season to his time here:
I think that definitely helped. Those last four games, that’s probably the highest intensity level I’ve seen at the college level. Just getting that experience in will definitely help for the future.

LaDue, on NHL players he likes to watch:
I like watching guys like Matt Niskanen. I’ve watched him in college, too. And just seeing him, how well he’s doing now. And John Carlson, all those guys, like watching them. [There’s] not really any player I’d compare myself to, just like watching those guys.

LaDue, on how he would describe his style of play:
I’d just say ‘efficient.’ I like moving pucks, I like making the right play at the right time and just trying to help my team out.