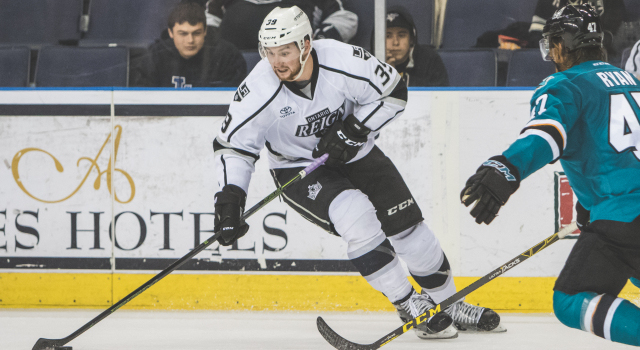 Nic Dowd, on the 1-1-1-1-1-1-1 playoff format for the series against San Diego:
I guess we’ll just figure that out when it comes to it. Take these next couple days, relax, regroup and get ready for San Diego.

Dowd, on the third period and being able to eliminate San Jose:
To end a team’s season is probably one of the hardest things to do in sports throughout the league. We knew that had to be our best period. We knew that they were going to obviously have a push-back. I actually thought they played well in the third, we just happened to get that third goal, took some air out of the sails. But, I thought they played well.

Dowd, on the importance of Auger’s goal to get the lead back:
It was huge. Augey made a great play, had some patience and put it in a perfect spot. That was great to grab the momentum back. It’s frustrating as a team. We’ve all been in that situation where you tie it up and then the other team goes up a goal again after you fought so hard to get back in the game. So, that was good. [Reporter: What’s the feeling on the bench in a situation like that?] It’s a huge relief. When they tie it up, bit of a roller coaster and then to get the lead back that quick from being on the other side of it is pretty devastating. … You battle back to get the game tied and then all of a sudden you’re right back where you started.

Dowd, on how the Reign’s play elevated at home:
The forwards did a good job getting pucks 200 feet, making their D turn. It’s tough to go back all the time. You’re taking hits and you’ve got to make plays. I think it’s a subtle thing but our D-men did such a good job of taking away space in the neutral zone, great gaps. They were attacking guys before they even got to the red line, which was brutal … speaking as a forward, that’s challenging when D are cutting your space off like that. … And once again, Budes played great.

Andrew Crescenzi, on the series as a whole:
They’re a great team and we played them 12 times during the year so obviously you’re going to gain some hate for each other and you’re going to have good games and great battles. Tonight was just another one of them and I’m happy that we prevailed tonight.

Crescenzi, on if he had to convince Stothers to let him play tonight:
Just feeling better.

Crescenzi, on his big game after having to sit out due to injury:
It’s obviously tough when you see your teammates out there and you want to play but that’s the circumstances and, like I said, it’s nice to contribute any way I can and getting the win here was a big win.

Crescenzi, on wanting to end the series tonight:
Whenever you’re ahead in a series you want to play as least amount of games as you can in the playoffs because it’s obviously tough and it’s a grind. You know you’re going to play great teams each round, so it was good to get the win and I’m happy we did it tonight and not Sunday.

Crescenzi, on being able to play more minutes as the game went on:
I was off for a bit there, so just trying to get my legs back and my cardio and everything. Stutts is great at controlling the bench, whenever he throws me out there, I’m happy.

Crescenzi, on the intensity from San Jose early:
We knew they were going to come out hard. It was do-or-die for them, so pretty much weather the storm and we wanted to play our game and take it to them. We don’t want to react, we want to make them react to us. I think we did a pretty good job of that.

Justin Auger, on his goal:
The rebound kind of came off and it was a scrum in front. We talked a lot about getting more traffic in front of Dell there and I know me and Cres were both whacking away there, got it in my feet and he’s really been challenging us so I threw a little fake in there, hopefully get him moving, get him kind of stuck standing still and then shot it over his shoulder. We talked about that, too. He comes out and challenges a lot so it takes away the angles pretty well, so just kind of get him moving there.

Auger, on setting up Samuels-Thomas’ goal with a tough forecheck:
It was a good chip by him. Late in the game, do everything you can. I was just trying to get the puck in deep and get in on the forecheck and just popped off that guy’s stick and right to [JST] and happened to work out perfectly.

Auger, on the team effort both tonight and last night:
We had a hard week of practice and it really prepared us for the weekend. Both days we came to work and that’s really what you need to do. Playoff hockey, it’s a whole nother level of play out here rather than the regular season. We just brought it both games.

Auger, on players like him stepping up:
It’s big in playoffs. You’re going to have injuries going down the run and you need your third- and fourth-line guys to step up. A guy like [Amadio] coming in there, playing some big minutes for us, that’s huge. We got a couple centermen out right now that are a little banged up and him coming in and playing a solid game, looks like he’s been here all year. It’s huge, you can’t depend on your first- and second-line guys every night. You need your third- and fourth-line guys to come out and contribute.

Auger, on how big it was to have Crescenzi back:
Cres is a huge part of our team. Big guy on draws, wins a lot of faceoffs for us out there. He’s an important piece, too, on the penalty kill. We missed him out there. Having him back was a huge help. Going down the stretch he’s going to play some big minutes and he’s somebody that you can put out there at any point of the game and you know he’s going to be solid.

Auger, on finishing the series tonight:
They’re sitting there with their backs on the wall, they have to win. It was really important for us to come out — we’re going to set the pace out there. I thought the first and second period there was a lot of pace out there and both teams were flying. It was a lot of back-and-forth sometimes. Just coming out, I think we contained them really well defensively. They had minimal shots on Budes, which helps him out a lot. And it’s huge coming down the stretch, obviously. You’ve got to learn how to put a team out when their backs are against the wall and we did that here tonight.

Auger, on how long the team will enjoy this for:
I think we get a day off here, so we’re going to relax. It was a tough series, I’m sure some guys are banged up and they’re going to need the rest. We’re going to come back Thursday and we’re going to be ready to go.