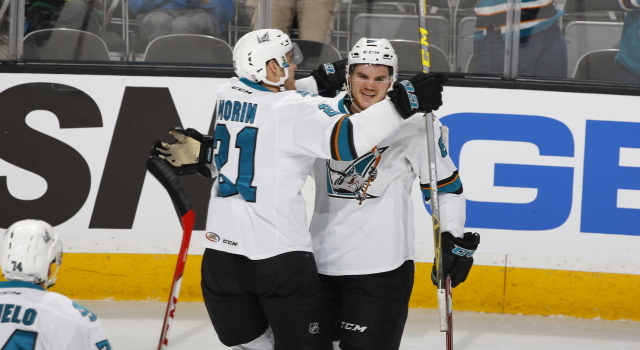 Reign game breakdown
In Game 2 of their best-of-5 series the Reign ran into plenty of problems in a 3-2 loss on Saturday night in San Jose. The Barracuda exposed the traditionally sound Ontario defense, shut down its power play and used a game-saving performance by goaltender Aaron Dell to even the first round Calder Cup Playoffs series at 1. After a scoreless first period, San Jose took a 2-0 lead in the second period that started with a tip-in goal by Ryan Carpenter. An errant breakout pass by Reign defenseman Kurtis MacDermid popped to the blue line where Joakim Ryan sent it on net for a deflection by Carpenter to give the Barracuda a 1-0 advantage at 3:58. Bryan Lerg extended the lead by turning defenseman Derek Forbort around and beating him on a drive off the right wall to the net where he powered by puck by goalie Peter Budaj. The Reign have proved resilient this year and came back twice in dramatic fashion in the regular season against the Barracuda, and so their third period push was of no surprise, but it was not enough. MacDermid connected for his second of these playoffs on a shot from the right point to cut the lead in half 2:40 into the third. San Jose’s Nikolay Goldobin brought the lead back to 2, beating Vincent LoVerde to the back post and finishing a pass from the right wing by Jeremy Langlois at 8:23. Ontario scored on a one-timer by Jonny Brodzinski with Budaj pulled in the final minute for the game’s final goal as the comeback fell short. Budaj wasn’t necessarily outplayed by Dell, but he did face only 15 shots. On the other end Dell had a busy night with 34 saves. Throughout the game, Ontario dealt with the loss of center Andrew Crescenzi, who did not return after being injured finishing a check in the first period. Head coach Mike Stothers afterwards said Crescenzi tried to play through it but could not and will be reevaluated this week. At some point in this series the Reign will need their top players and their power play to arrive. First-liners Michael Mersch and Sean Backman have been held without a point and the power play, which was a dismal 0-for-4 on Saturday, is now 0-for-6.

Three stars
–Aaron Dell – The Barracuda netminder got to the Reign early, as evidenced by his pad save on a Brodzinski breakaway in the first period. He stole this game in many ways, particularly in the final two frames where his team was outshot 27-8. By Stothers’ standards it’s going to take more more traffic, more confusion in front and more quality chances to ensure Dell does not do the same going forward. Dell held the Reign to just one goal in the first 59:35 of this one and through the first five periods of the series he was actually the points leader, assisting on two goals. It was his first pro playoff win.
–Joakim Ryan – The San Jose defenseman assisted on every goal for his team in Game 2 and leads the series with three points. He smartly threw the the puck on net with the Reign scrambling on Carpenter’s goal and had the primary helper on Lerg’s as well.
–Jonny Brodzinski – The rookie out of St. Cloud State has been the offensive bright spot for Ontario, scoring in both games and averaging a team-high 5 shots on goal. Despite missing on the early breakaway, he made due in the third by connecting on a slick backhanded pass from Nic Dowd, blasting a one-timer from the left circle by Dell.

Turning point
With the Reign turning the crank on the comeback wheel, Goldobin’s finish in the third period to put the lead at a comfortable two again at the 8:23 mark was a relief for the hosts, especially considering the way Dell was playing in front of them.

Stat fact
–5 – Shots on goal each for Jordan Samuels-Thomas, Brodzinski and Mersch. Their combined total matched what San Jose had all game.

This and that off-ice
Defenseman Kevin Gravel was returned to the team from the Los Angeles Kings in time for Game 2 and played in his first Reign game since April 2, slotting alongside usual partner Forbort.

Next up
The series now shifts to Ontario, where the Reign will host the final three games (if necessary). Game 3 is Thursday night at 7 p.m. PT at Citizens Business Bank Arena, followed by Game on Friday at 7 p.m. and if warranted, Game 5 is at 3 p.m. Sunday.