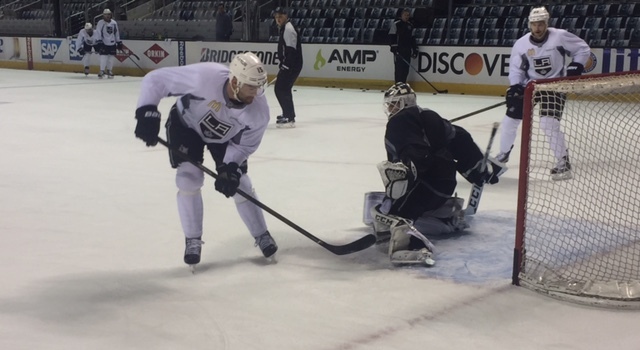 Good morning from the SAP Center interview room, where we’re waiting for Darryl Sutter to emerge from team meetings and join us for a quick chat in advance of Game 4 (7:30 p.m. / FOX Sports West / USA Network / CBC / TVA Sports / KABC 790 / I Heart Radio).

-There were no changes to lines or pairings at today’s skate from those that were shown at the end of Game 3. Anze Kopitar centered Dwight King and Marian Gaborik, Jeff Carter centered Milan Lucic and Tyler Toffoli, Vincent Lecavalier centered Tanner Pearson and Dustin Brown, and Trevor Lewis centered Kyle Clifford and Kris Versteeg. The defensive alignment again paired Rob Scuderi with Drew Doughty, Jake Muzzin with Luke Schenn and Brayden McNabb with Jamie McBain, while Kevin Gravel and Matt Greene formed the fourth pair. Andy Andreoff and Nick Shore appeared to be the extra skaters up front, though no one remained on the ice for extra work for any real length of time, so there was no confirmation that the above lineup will, in fact, be the one used tonight against San Jose. Jonathan Quick left the ice first at the morning skate and is expected to start in net in Game 4.

-Alec Martinez did not skate, and to reiterate, does not have a stall in the visitors’ dressing room at SAP Center.

-Tonight’s officials will be referees Dan O’Rourke and Chris Lee and linesmen Steve Miller and Michel Cormier. Mike Leggo is the standby referee.

-There’s no Kings Talk on KABC 790 tonight, as we’ll be traveling back to Los Angeles immediately following the game.

-On the series’ physicality, Milan Lucic said, “I think that was something everyone expected heading into this series. Two big teams who play that physical style, and it’s a part of our game and what gives us success, so we want to keep getting in on the forecheck and keep finishing our checks and … it paid off for us on the winning goal last game. When Brownie’s doing things like that, that’s when he’s helping out the team the best. Just got to keep up that physical play, and you hope that it keeps giving you some kind of success.” More from Lucic, as well as Darryl Sutter, Dwight King and Drew Doughty will come throughout the afternoon. Thank you, as always, for reading.