Waking up with the Kings: April 17 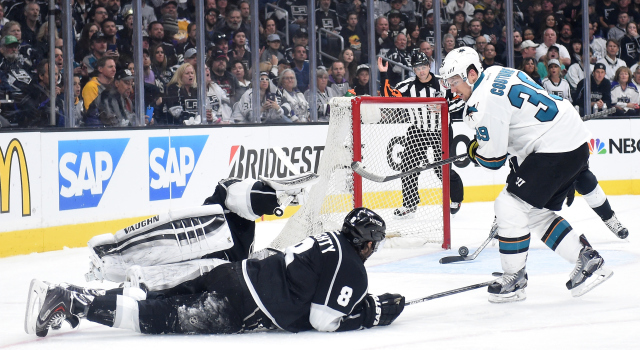 The important details at the two-game pole of this Western Conference Quarterfinals series can be expressed succinctly through statistics. Joe Pavelski has four points in two games. Brent Burns has three points and eight shots. Logan Couture has two points. On the other side, Anze Kopitar has one assist and one shot on goal. Tyler Toffoli has no points and is a minus-three. Ditto for Drew Doughty. There have been narrow margins on the scoreboard, but in terms of the performances between the teams’ top players, there is a massive divide. On a night in which the Kings improved their defensive zone play and ceded very little in five-on-five, it was their inability to generate a sustained attack that could spawn high-grade opportunities during even strength play that proved to be a major influence in the Game 2 loss. For the first 35 minutes of the game, Los Angeles faced significant challenges in working with the puck in the offensive zone as San Jose forced earlier dump-ins and was quicker to retrieve pucks from behind their net. Whether it was due to a neutral zone forecheck or Los Angeles’ inability to implement its own pressure, it kept a good portion of the attack to the perimeter and ended zone time as quickly as it started. The Kings eventually started getting pucks deep and some additional zone time towards the end of the second period and early in the third, but for the middle 10 minutes of the third period, the Sharks ably minimized the amount of time their opponents skated with the puck in the offensive zone.

On the other hand, Los Angeles has scored once at even strength, they’re not getting anything from their top players, Jonathan Quick is yet to have a signature performance, and they’ve still lost two games by only one goal. Hitting the net would be a key improvement; the Kings have missed the net 43 times over the first two games (and, to be fair, the Sharks have been credited with 37 misses). Martin Jones was only the game’s second star by virtue of being six-foot-three, standing in front of his net and not letting in anything soft; he wasn’t called upon to stop anything outrageous on Saturday, and should Los Angeles be able to increase the frequency of their second and third opportunities – see: Vincent Lecavalier’s power play goal – and generate deflections, redirections and quick passing plays from close proximity, they’re going to raise the heat on the talented and calm but playoff-untested goalie. That applies for virtually any goaltender, but it will be interesting to see how Jones reacts should he face adversity in this series. The Sharks have trailed for all of four minutes and two seconds.

Marian Gaborik was maybe the best Los Angeles forward – he was slick, creative and threatening off rushes as the game developed – and Darryl Sutter said Jamie McBain was the team’s best defenseman. The latter may be a ploy to motivate other defensemen, but if the team’s two best players in a playoff game were a player who had missed nine weeks and was playing his first game after a knee sprain, and a player who was the seventh defenseman for most of the season, that’s part of the reason why they’re trailing two games to none. For the Kings to get back in this series, they need Kopitar, Doughty, Toffoli, Jeff Carter and Jake Muzzin to be their best players. There were some improvements territorially and in the defensive zone between Game 1 and 2, but until top performances from the team’s key players align, time and the circumstances of the series will be working against them. 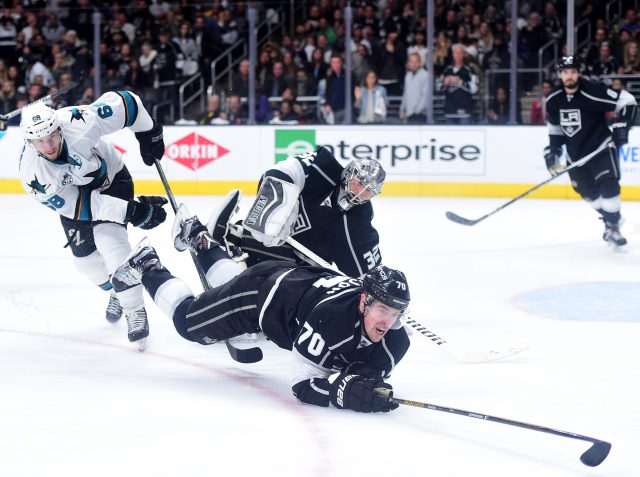