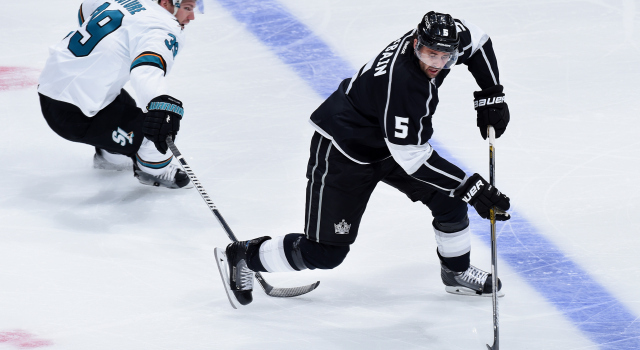 On generating offense and scoring only one even strength goal in the series:
I think tonight was much better than the first game generating offense, meaning for the most of you, the meaning would be scoring. We only scored once tonight.

On whether the “little things” have to be cleaned up:
Well, they scored on their first shot. It’s a game of little mistakes. I think there was a little mistake there, but that really didn’t deter us much. I think you have to look more at – Pavelski scored that goal? I think their line’s been – how many goals have they scored in the series? What is it, four and two, six? That line’s been on five goals, counting power plays. So I would say that would be the difference in the series right now, would be the Pavelski line. No question.

On Marian Gaborik:
I thought after being off nine weeks, nine and a half weeks, I thought he played really well. I thought those guys who went in, I thought McBain was our best defenseman, and I thought Gabby was our best winger.

On Anze Kopitar’s game:
Those guys aren’t getting enough. You talk about the offense, but when you talk about sawing off, once you break it down, I don’t think you’re getting enough in terms of not really possession, but for sure not enough shots out of those guys, for sure. I think without even looking that would be the case.

On whether the line adjustments were due to trying to generate offense or find different looks:
No, not at all. I think Gabby hadn’t played in nine and a half weeks, and we were playing him on left wing and right wing, and he’s taking little shorter shifts, so you’ve got to move guys around a little bit. Nothing more than that.

On whether he’s surprised by Martin Jones’ performance:
He comes from a good program. I mean, jeez, they got 98 points or whatever. He played most of the games for ‘em, so I don’t think anybody’s surprised by him. [Reporter: I’m sure you’d like to make his life a little more difficult, though, in terms of net presence.] I think our net presence was good. There were several great opportunities by our top players that he couldn’t see the puck and he didn’t have to stop it. I can think four of five, just quick when you asked that … Hey, he didn’t see ‘em and he didn’t know where they went, but they weren’t on the net.

On the challenge of climbing out of a two-nothing hole:
Just think, if you can cut it in half, it’s two-one. It’s not that hard to figure out.