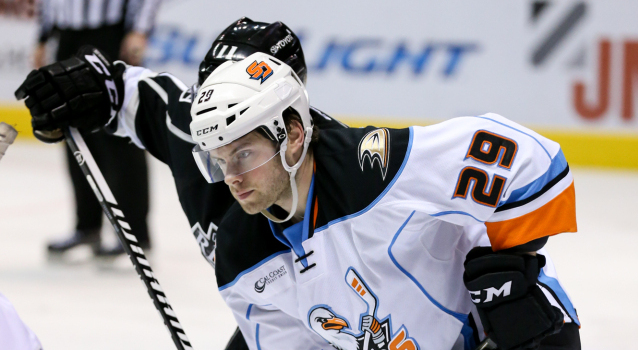 –The Reign finish the regular season with a 44-19-4-1 record and .684 winning percentage, tops in the Western Conference and second in the league only to the Toronto Marlies (53-16-5-1, .747), who play their final regular season game on Sunday.

–The Reign lost their very first game of the season when leading after two periods, finishing at 30-1-0-0.

–San Diego is the only team the Reign finished with a losing record against at 4-6-1-1.

–With an assist on Joel Lowry’s goal, center Kris Newbury extended his points streak to six games (3 G, 5 A).

–Goalie Michael Houser made just his fifth start as usual starter Budaj was given a night off after starting the previous 22 straight. Houser finished with 40 saves to go 1-4-0-0 on the season.

–Rookie Matt Schmalz scored his first pro goal and had his first pro point on Lowry’s first period goal. Schmalz, 20, recently joined the Reign following the conclusion of his junior career at OHL-Sudbury. He’s a fifth round (134th overall) Kings selection in the 2015 draft.

–The game featured 122 PIM and 110 in the third period alone. At 9:24 of the third period fights broke out resulting in 14 penalties being called including four fighting majors and seven 10-minutes misconducts for continuing altercation.

–With a goal and an assist, Lowry recorded his second multi-point game and his second this month.

–The Reign take a 1-0 lead on Joel Lowry’s goal off as Matt Schmalz banks the pass off the net to him in the slot (all videos courtesy of Sheng Peng):

–Corey Tropp nets his first of the game and the teams go into the first intermission tied at 1:

–Reign rookie Schmalz scores his first pro goal in his third AHL game in a net-front battle in the second period:

–Some nice power play puck movement for the Gulls results in Tropp’s second goal of the game in the third period:

–Gulls veteran Brian McGrattan scores the eventual game-winner and gets a penalty for his celebration for unsportsmanlike conduct with less than five minutes left in regulation: