Martinez doesn’t practice; Doughty on his own usage 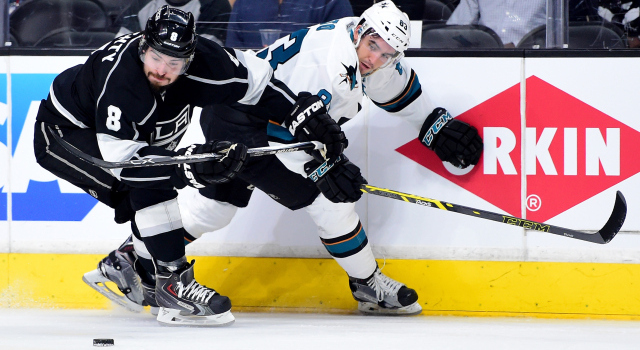 Alec Martinez didn’t practice on Friday, which, coupled with the recall of Kevin Gravel from AHL-Ontario, raises questions about the defenseman’s availability for Game 2.

Martinez wasn’t particularly effective in his two periods of work in his first game back after missing the final four games of the season due to an undisclosed injury, but should he miss Saturday’s game, there’s a good chance a player will step into the lineup who is yet to play in the postseason. Neither Gravel, who skated on Friday, nor Jamie McBain, who would be the favorite to re-enter the lineup should Martinez be unable to play, have appeared in the Stanley Cup Playoffs.

Might the Kings go to a more top-heavy defensive approach?

“I’m ready for whatever,” said Drew Doughty, who earned 29:19 of ice time on Thursday. “If [Martinez] can’t play, if I need to play 30 minutes, that’s great, if not, I can play 25 minutes. Either way, I have to play the same way. I have to be, I think, emotionally involved in the game. I can play better than I did last night, and I can lead us better than I did. The next game I’ve got to step up and do that.”

Martinez’s availability for Saturday isn’t clear, but should the versatile left-shooting defenseman who has played virtually the entire season on his off-side not be able to go, it’s natural to think that Doughty would stand to be in line for another night of 30-plus minutes. Los Angeles was 14-2-2 in the regular season when he logged at least 30 minutes.

Drew Doughty, on whether he’d agree that defensive zone play was “sloppy” in Game 1:
Yeah, a little bit. Their forecheck is probably one of the biggest parts to their game. It’s probably one of the things they’re best at as a team, and we knew that going into it. We knew that we were going to have to make good plays in the D-zone in order to break out, and we weren’t able to do that last night, and that was definitely a factor into why they won. [Reporter: Is their forecheck more aggressive than most teams you see?] I don’t know. I don’t know if I would say that. I just think they’re more effective at it. A lot of teams have that sweep forecheck where they have the D pinching and all that kind of stuff, but they’re not hitting you as much. When you’re going back for pucks knowing a guy’s probably going to finish you, you kind of think twice sometimes. You’re not scared to go in there or anything, but you’re thinking, ‘I might get banged here if I beat the first guy.’ You think about that, and we try to do the same thing – bang on the forecheck and turnover pucks. Both teams are very good at it, just they were better than we were at it last night.

Doughty, on the pressure by San Jose’s power play, even though they only scored once:
Yeah, their power play’s very good. It starts with, I think, Joe Thornton. He’s a very, very good player out there, one of the smartest players in the league, without a doubt, and then he’s got guys around him that can shoot the puck and make plays and tip pucks. They’re very good at tipping pucks. We’ve got to stay out of the box. We took way too many penalties last night, and it hurt us.

Doughty, on whether there’s a change in Los Angeles’ ability to roll three defensive pairs:
No, I don’t think so. Yeah, in the past we were rolling three pairs, but I was still probably playing 28 to 30 minutes in the playoffs, anyway. We’re trying to do the same thing here, and we can do the same thing. We have three very good pairs. We have guys in the lineup that are very good defensemen and guys that we trust fully. We can roll three pairs. We definitely don’t feel that way in our room. We know that we have six very good defensemen in our lineup every single night and six guys that can be very effective.

Doughty, on the challenges of facing Joe Pavelski:
He works hard, he seems to be in the right spot all the time. You always have to be aware of where he is, not only just getting open and getting a one-timer shot off or a wrist shot off from a pass, but his tipping ability is probably one of the best in the league. He’s very good at working towards pucks where the defense can’t get to him and lift his stick and take him out. He gets a lot of sticks on pucks, which helps him in a lot of situations. He had two goals the other night, but we know how much better we can play against him and all their players.

Doughty, on partnering with different defensemen over the course of the season:
For the most part I’ve been playing with Nabber for a while now, and I feel like we’re very good together. We communicate well together, we teach each other a lot of things and work well, and when I have to play with the other guys, I’m so used to watching them when I’m sitting on the bench that I kind of know their habits and tendencies. When I have to play with one of those guys, I know what they’re thinking, what they’re doing. The biggest thing when you’re playing with someone you’re not used to playing with is just communication, and our defense is very good at communicating with each other and figuring stuff out, so it makes it easy.

Doughty, on Duncan Keith’s heavy usage in the 2015 Stanley Cup Playoffs:
It was good I think to see him win [the Conn Smythe Trophy]. I think in the past before that there were other D-men that probably could’ve won that award, too, and they didn’t. For Keith to win it I thought was great. The defense kind of gets overlooked for those kind of things a lot of the times, and he was very deserving of it. If he hadn’t won, I would’ve not been upset, but I would’ve probably said something about it.