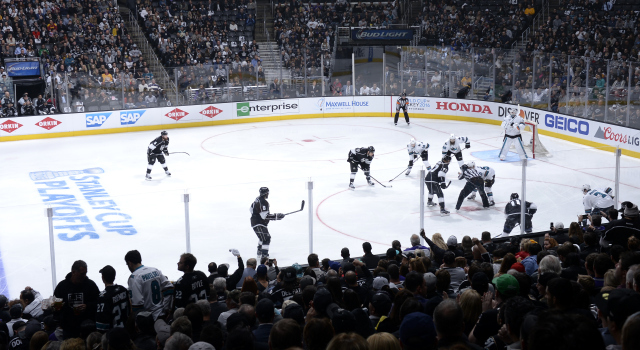 Drew Doughty isn’t a center. He actually wanted to be a goalie when he was younger, as he revealed today, but his parents nixed the idea when the price of goalie equipment was considered. (Given his desperate, sliding save last night, that might not have been a bad back-up plan.)

And though he’s not a center, he still spoke about faceoffs and shared what the defensemen’s responsibilities are when a draw is cleanly lost in the defensive zone. It’s topical, as two San Jose clean offensive zone faceoff wins lead to goals, and we all know how Darryl Sutter feels about faceoff losses immediately followed by goals against.

“You’ve got to grab your wingers,” he said. “Depending on what the wingers do, the left defenseman has one of them and the right defenseman has one of them. You’re supposed to communicate in order to pick up those plays, and then it’s always center stays on center. We weren’t happy that they scored two goals off faceoffs last game. We take a lot of pride in our faceoffs, firstly winning them, and then if we do lose them, playing good defense to get the puck back. We can’t be giving up goals on faceoffs like that.”

“We watch video before the games every day, so I think just every guy [on San Jose] is different, different types of faceoffs” said Andy Andreoff, who won four of five draws on Thursday. “Use your feet more, use your stick more, use your body more, so you’ve just got to be aware of that.”

With traditionally strong center depth, the Kings haven’t been slouches at the faceoff dot themselves, though with Jarret Stoll and Mike Richards no longer a part of the team, there had been challenges that were highlighted earlier in the year before Vincent Lecavalier had joined the team. Though they were in the red and tied for 20th in the league on the day Lecavalier made his L.A. debut on January 7, his 51% success rate at the dot helped push the team up to a tie for 10th in the league at 50.5%.

Los Angeles controlled the dot in the first period, but over the final 40 minutes San Jose won 26 of 41 draws. Jeff Carter struggled, winning just five of 18, and was beaten cleanly by Ward on Brent Burns’ go-ahead goal midway through the second period. The game-winner, scored 17 seconds into the third , came after Joe Pavelski won a clean draw against Anze Kopitar, leveraged the Kings’ center while receiving a feed from Justin Braun below the goal line, and received little impediment in finishing off a hard wrap-around between Jonathan Quick’s legs.

Once a faceoff is lost, there are team-wide adjustments that need to be made in order to properly defend the immediate possession of the puck won by the team that wins the draw.

“Generally there are nine faceoff dots, and there are a lot of different situations in terms of win-loss, your side of center, their side of center, end zone, O-zone, D-zone – there are lots of different coverages and responsibilities,” Darryl Sutter said. “A lot of it has to do with who’s on the ice for the other team. Pavelski, Thornton and Hertl all take faceoffs, so they have a lot of different plays that they use, and if you look at the goal they scored last night, Pavelski wins the draw and Kopi loses Pavelski. Generally a rule of thumb, for the most part, unless your D are switching or you’ve got different alignments with your wingers, and the rule of thumb normally on those nine dots would be center-center. That’s your coverage … and it everybody else’s responsibility changes. We go through a lot before every game, and it’s become a way more prevalent part of pre-scouting and coaching now, is are those nine dots – because there are lots of different plays going, win, lose or tie, from those nine dots.”