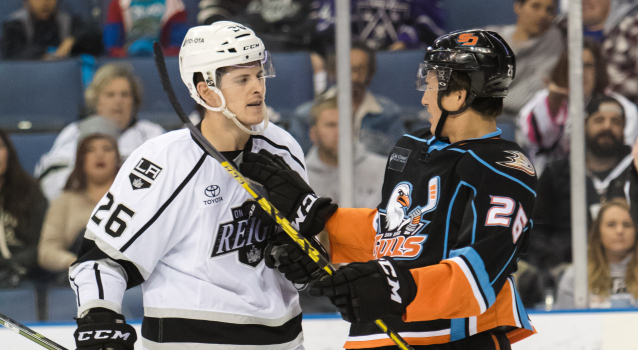 –With the win the Reign (44-18-4-1, .694 winning percentage) secured the top seed in the Western Conference, good for home ice throughout the Western route of the Calder Cup playoffs beginning next week. With one game to play, Saturday at San Diego, Friday’s victory gave them the mathematical edge over top Central team Milwaukee (48-22-3-2, .673), which also has one game left.

–With his third period goal, Kris Newbury extended his point streak to five games (3 G, 4 A).

–Nic Dowd scored in his return to the lineup after his recent call-up with the Kings. His goal was his 14th of the season and the team’s 7th shorthanded goal.

–Captain Vincent LoVerde returned to the lineup after missing the past 11 games due to a cracked trachea. He started the game and played alongside usual defensive partner Kurtis MacDermid.

–The Reign improved to 4-5-1-1 against the Gulls, who remain the only team to have a winning record against Ontario this season.

–Peter Budaj stops Ondrej Kase on a breakaway after a Ryan Horvat giveaway at the far blue line (videos courtesy of Sheng Peng):

–The Gulls go up 1-0 with just 22.5 seconds left in the first period as Matt Bailey buries the rebound of a long Brian McGrattan shot:

–Ontario answers in the second period, shortly after a power play attempt expires, on a redirect by Jordan Samuels-Thomas of a Horvat shot at 4:29:

–Justin Auger finds Kris Newbury in the slot in the third period as the Reign take the lead for the first time in the game:

–Nic Dowd scores shorthanded late for a momentum-swinging goal after a tough forecheck by Michael Mersch:

–Just 37 seconds later Mersch connects on the power play off a faceoff to put the Reign up 4-1:

As if this were a game of HORSE, Mersch follows Dowd's beauty w/ his own @ontarioreign 4 @SDGullsAHL 1 pic.twitter.com/tVaJiciRng

–And then 7 seconds after the Mersch goal, the Gulls’ Mike Sgarbossa breaks free off the center ice faceoff to beat Peter Budaj. It would be the game’s last goal despite the Gulls’ last-ditch efforts with goalie Anton Khudobin pulled:

–The Kings recalled defenseman Kevin Gravel on Friday afternoon. He did not play tonight.

–The Ducks sent forward Nick Ritchie back to the Gulls on Friday prior to Game 1 of their playoff series with Nashville.