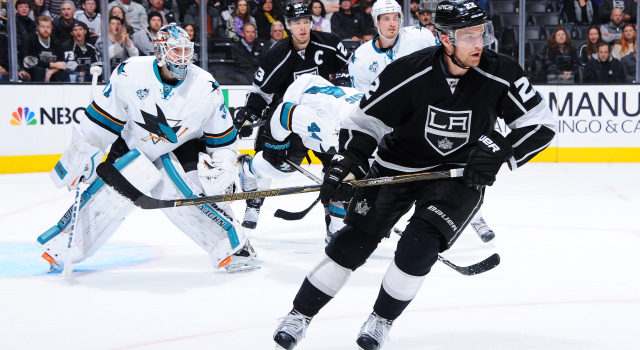 First things first: Starting times and broadcast information for additional first round series games have been announced. Games 3 and 4 will begin at 7:30 p.m., while Prime Ticket will carry Games 3, 5 and 7 (if necessary). FOX Sports West will also carry Game 4, while the hypothetical game 6 will be determined at a later date. Nick Nickson and Jim Fox will have the calls on television, while I’ll be paired with Daryl Evans on KABC 790 AM.

KILLING IN THE NAME OF

The Kings and Sharks combined for 43 power plays in the five-game season series, and that average of 5.4 power plays per game is likely to come down when whistles generally aren’t used as frequently in the postseason.

In the 64 playoff games that Darryl Sutter has been behind Los Angeles bench for, the Kings have killed off 87.2% of opposing power plays. Based on part because of that special teams success, they’ve won 41 of those 64 games. But this year, Los Angeles’ penalty kill was around the league average for much of the season and ended ranking 15th at 81.4%. Because San Jose’s power play is traditionally strong – they ranked third in the league in the regular season – how is this match-up viewed?

“I think in the playoffs, everybody resets,” Sutter said. “If you’d look at past playoffs, for example, I know when we’ played New Jersey in the finals, they were coming off a regular season where they had, I believe, the best penalty killing in the history in the National Hockey League, and in playoffs they had the worst. So it just tells you about the changes, and what happens a lot in playoffs, it just becomes more magnified. Officials get caught in it, too. There are games where it becomes more of an even number. It’s very seldom lopsided. If it’s lopsided, that’s means that one team’s got the [—-] kicked out of them. There’s a good reason, also, why most teams are in the playoffs in today’s game. You look at numbers, you say that the Sharks have a good power play, how many teams are in 20-percents now? Probably half the league is. So 20 percent of it used to be a once-every-couple-of-year deal. Now you’ve got 10 teams, including both teams tonight. So penalties not taken are very important. It’s hard, and it gets much more difficult in playoffs, too, because top guys play more, and top guys are mostly, when you see it now, are guys who are really good at down low. I know the rush and the highlight looks good, but a lot of your playoff stuff is done down low and around the net, and that’s when you separate it out and when you see the skill.”

Let us all recall Sutter’s Law. Playoff series are often decided by goaltenders, special teams, top players, unsung heroes and discipline, as noted by Darryl Sutter four years ago when asked about variables that affect a team’s postseason fortunes.

“Write it down and don’t forget it,” he said at the time. I didn’t!

“That’s what makes our team really good,” Dustin Brown said. “We have a lot of guys that can kind of go up and down the lineup and fill holes when needed. There’s no ‘me’ guys in this room. That’s why it works for us and has worked throughout the season. Again, you see those guys step up and perform well, it is what it is, it’s kind of how a lot of our guys are.”

Several players have seen their even strength points per 60 minutes rise between the regular season and the postseason. Tanner Pearson, whose 1.94 5v5 Pts/60 ranks fifth on the team in playoff games since 2012, generates 1.68 5v5 Pts/60 in the regular season. Dustin Penner jumped up from 1.46 to 1.64. Kyle Clifford, who scored a key first period goal in Game 1 against New York in 2012 and assisted on Alec Martinez’s Cup-clinching game-winner, jumps from 1.06 to 1.40.

Dwight King’s jump in production from the regular season to the playoffs has mostly been influenced by all situations, including special teams. But it’s difficult to talk about role players without referencing King’s five goals in 20 games during his 2012 postseason debut. His production in all situations has jumped from 1.40 points per 60 minutes in the regular season to 1.62 points per 60 in the postseason.

“When I’m on my game it’s obviously a continuation of the style we play here,” King said. “In playoffs there’s obviously a lot more physical play, a lot more battles and that’s something that we build our team around, and that’s something I have to be good at to be effective. It doesn’t just come naturally though, I’ve got to put in the time here and get my game going in the right direction coming tomorrow.”

King has had moments of production since returning from a broken foot this season and ended the season with seven goals and 13 points in 47, a top-heavy total that saw him pot 12 points in his first 28 games but no goals and one assist in his final 19.

In the playoffs, part of his success is by finding a role amidst the heavy, forechecking, possession-driving teammates that complement each other well and have worn down opponents over lengthy playoff series.

“I think that’s a fair assessment on the physical part of it,” he said. “Obviously when you hit a guy so many times eventually he stops wanting to go get the puck. That’s the mentality I think you have to have to be successful. It’s kind of the way we’ve built our team and they’re the same way. They’ve had their playoff series, they know what it’s going to be like. Obviously it’s more of a mental test, too, that you’ve got to show up in all of those battles and show what kind of player you are to be on the winning end of them.”

He’s also a versatile player who primarily plays on the left side but can also line up along the right wing in certain situations and has experience as a center in junior hockey and some of his earlier AHL days.

“He’ll play anywhere up and down the lineup,” Lewis said. “He’s a big body and he gets in on the forecheck and holds onto the puck well. I think against a team like this we need guys like Kinger to step up.”

Is there any better player in the Western Conference in creating opportunities off rebounds, tips, screens and second chances than Joe Pavelski? The 38-goal scorer with outstanding hands around the net has been known for creating deflections in the slot and making life difficult for goalies as he changes their eye angles.

Earlier today, Rob Scuderi spoke about how the defense has to contain a player with such effective hands from close proximity to the net.

“You have to make sure you stick with him the entire way around the zone,” Scuderi said. “Sometimes as a defenseman, sometimes you may let a guy slip once he starts skating away from the blue paint. He’s also dangerous there, too. He’s got a great shot, he’s got good hands so he’s good in tight. But when you put him out say 15-20 feet he’s got great hand-eye coordination, gets his stick on a lot of pucks and those can be dangerous. When you know you’re sticking on him you know you have to stick with him the whole way.”

Staples Center is a busy building. Roughly 12 hours after Kobe Bryant had dropped his “Mamba out” salute after his 60-point night against the Utah Jazz to close out his legendary career, both teams were in the building, and the dressing room occupied by the Jazz the previous night had already been converted into a room housing both coaches’ press conferences.

Darryl Sutter had noted that the team had observed the scene outside Staples Center while arriving downtown yesterday evening (and in keeping with recent tradition and staying in a hotel the night before home games).

Alec Martinez admitted to watching the very end despite not being a huge basketball fan, and spoke of his respect for an athlete as highly regarded as the to-be Hall of Famer.

“Certainly respected an athlete of that caliber and all that but I think there was a lot of other people certainly a lot more excited about it than I was,” he said.

“We were down here last night and to see all the fans out in the courtyard area around there. You see the big pictures of Kobe on the side of Staples, that’s pretty cool, he’s been huge for this city for 20 years now and he’s brought a lot of championships here, so it’s certainly cool to see him honored the way he was.”

Said Drew Doughty: “Yeah I didn’t really watch the game, but I watched the end of the game and saw his speech and all that kind of stuff. It was pretty cool to see. Playing here in LA, you hear a lot about Kobe and I really liked him as a player.”

Asked whether he could envision a replication in mid-June of all the streamers and confetti that fell from the Staples Center rafters last night, he replied, “You know what, I can now. I didn’t think about that at the time but, yeah, that’s obviously our ultimate goal but we’ve got a lot of work to do before that can happen, so it all starts tonight.”