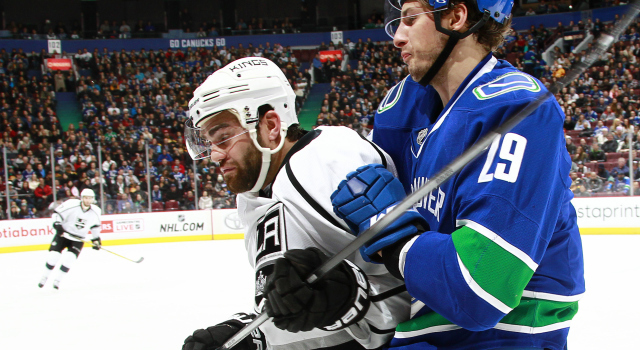 12 hours after the conclusion of their 2-1 win over the Ducks, the Kings reconvened at their El Segundo practice facility for treatment, video and team meetings. Six players took the ice: Jhonas Enroth, Nick Shore, Nic Dowd, Kevin Gravel, Matt Greene and Marian Gaborik. Gaborik was getting up and down the ice a touch better than he did last weekend, but it’s still too early to start projecting a timeline of when exactly he’d be able to start participating in wider capabilities. Greene’s return isn’t imminent, either.

I spoke with Vincent Lecavalier and Jonathan Quick; reports on the Jennings Trophy and what stands to be Lecavalier’s final regular season game will follow. Lecavalier also spoke about his outlook in advance of the playoffs and how Los Angeles’ systems compare to those he had previously operated under. Darryl Sutter also spoke with reporters; his answers are below.

Sutter also discussed the competition for several depth roles in advance of the playoffs. While some of the nuances of Andy Andreoff’s performance are down below, he also weighed in on the competition for available minutes at center that Andreoff, with three goals, four points, 10 shots on goal and a plus-four rating over his last seven games, has inserted himself in the conversation for.

“I just want somebody to take it,” Sutter said. “Andy’s been a little bit more reliable in his own zone, so we put him at center to see if he can handle that. So it’s a competition for that spot, right there. At the time it was Dowd and Shore, and now we’ve put Andy in there a little bit. It’s a competition for that spot. Hey, I wish they could all play. I wish we could dress 30 like in whatever it is, five lines or four lines like college or Europe and do all that stuff. But we can’t. The bench ain’t big enough for ‘em all.”

Darryl Sutter, on consistently being in the hunt for the Jennings Trophy:
Yeah, we’re there every year. It’s one of our goals, to be in the top-five [for goals-against], all the time. If you look at last year, Carey Price ran away with it. It’s why Montreal had a great year, and not [just] Carey Price, but the team, if you look at that. It’s probably to me, even though the individuals go on there, and when we won it last time, only Quickie went on there because you need so many games. I forget, there’s a number – is it 25? Yeah. I remember saying after, if I had known that – I didn’t know that was it – I would’ve got Jonesy in more, because I believe it’s starts. It’s something like that. Because, really, games played and minutes are a big difference. You can play a guy five minutes. But I don’t know the exact rule. You’d have to look it up. I remember saying if I had known that, and if you knew you had a chance of winning and you had enough games left, you would’ve found a way to get ‘em somehow so his name could be on it, too. It’s to me, the major team award. I know there’s been lots of talk about individuals obviously when your team does well and the star factor, but to me the most important awards that just players go on are Jennings, Conn Smythe.

Sutter, on Ben Scrivens & Martin Jones helping Jonathan Quick win the Jennings in 2014:
Well, he was hurt. But at the end of the day, if you look at the best goalies, they’re all playing now. If there’s no injuries involved, they’re playing 60 to – Jonathan would play the most this year – 60-to-68 games. That’s what it is. That’s about winning. Teams that split are not sure who their number one are, which means that they’re still not a great goalie or looked on as a great goalie or they haven’t won a championship. The teams that are playing in those games are guys that have won championships, have stayed healthy, and are perceived as a clear-cut number one.

Sutter, on the Clifford-Andreoff-Versteeg line:
Kris has played on every line and Cliffy hasn’t played every game, and Andy’s played every position, so it’s not a line. [Reporter: I know, but maybe just guys who aren’t primary goal scorers-] It’s not a line. All of them might not play tomorrow. [Reporter: Andy seems to have particularly elevated his game.] We’re really challenging our young players to see if they’re playoff players, and we have a number of players. We have [players] who aren’t playing right now – the two Nicks – and one or both of them may play tomorrow, and that means I’m going to evaluate strictly on once we know who our opponent is, I’m going to evaluate it on that and performance. That’s what it is. And we moved Brownie around last night because when you play Anaheim, they’re top-heavy, and you need two lines to go against them, so we moved Brownie there with Jeff and Ty last night, and the other guys, actually, if you actually broke that down and looked at that game, those important goals that Kris scored and that line scored, they were also too many D-zone starts for them, which icings, things like that, which result in penalties and goals against, and that costs you series. So there’s a lot more to it than what you think.