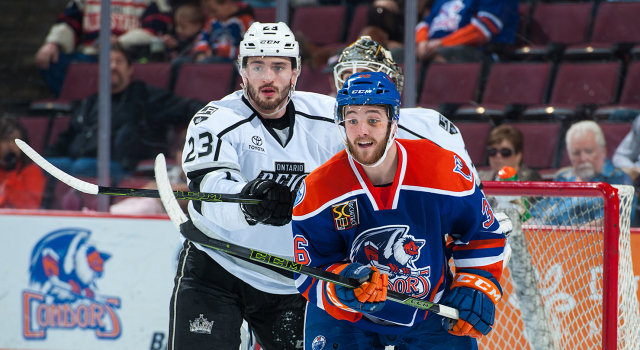 –The game was the last regular season home game for Ontario and they improved to 7-4-0-0 against Bakersfield.

–Goalie Peter Budaj earned his 40th victory of the season (a day after Kings goalie Jonathan Quick also earned his 40th in a 2-1 win over Anaheim) stopping 30 shots. According to the league’s communication deptarment, only one AHL goalie in the last 50 years (Ryan Miller, 2004-05) has won 40-plus games in a single season.

–Joel Lowry picked up his first multi-point and multi-goal game of the season with two goals and one assist.

–The line of Michael Mersch, Brett Sutter and Jonny Brodzinski had 16 of the Reign’s 35 shots on goal.

–The Condors went up 1-0 with 2.2 seconds left in the first period on a power play goal by Brad Hunt (video courtesy of Sheng Peng):

Hunt blasts it from blueline on PP, his 12th of the yr w/ 2 secs left in 1st @Condors 1 @ontarioreign 0 pic.twitter.com/wJ7kvcFGIL

–Brett Sutter scores his ninth of the season on a great individual effort to tie the game in the second period:

Sutter & Mersch bang away, and Brett puts it past Rimmer @ontarioreign 1 @Condors 1 pic.twitter.com/pWzRjKXYTB

–Joel Lowry sets up Justin Auger as the Reign take the lead 7:10 into the third period:

–And Lowry connects from the right circle for his first of two goals on the night, the second being an empty-netter: