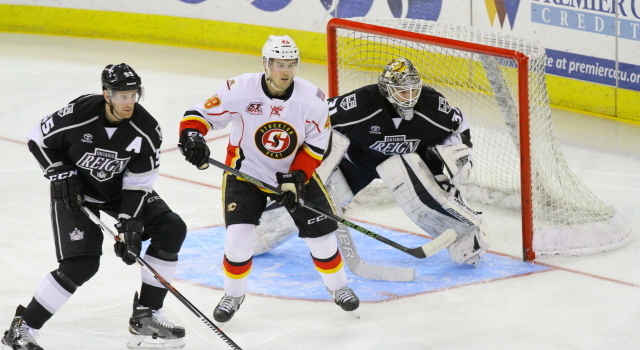 Reign game breakdown
The Reign (41-18-4-1, .680 winning percentage) clinched their first Pacific Division title in the new era with a 4-1 road win against Stockton (30-29-2-2, .508) on Tuesday. After a scoreless and first period the Reign broke the game open on consecutive power play goals by Michael Mersch (a tip of a Jeff Schultz shot) and Nick Ebert (a blast from the point) in the first 5:16. Mersch’s team-leading 23rd goal also broke an 0-for-15 failed power play run. After Bill Arnold’s deflection on the power play made it 2-1 midway through the period, the Reign answered with goals 38 seconds apart from Derek Forbort and Sam Herr. Goalie Peter Budaj stopped a season-high 46 shots to pick up his AHL-leading 39 victory of the season and the Reign handed 18-year-old Nick Schneider his first AHL loss after joining the Heat at the beginning of the month.

Three stars
–Nick Ebert – Not only did the second-year defenseman register the eventual game-winner, he’s been coming into his own as of late. After missing over a month of action between January and February due to an upper-body injury he’s making his presence in the lineup, appearing in 16 of the last 19 games since his return. Tuesday, he finished with a game-high 6 shots on goal and his second period goal was his second of the season. He now has points in back-to-back games for the second time.
–Peter Budaj – After a small dip in performance that saw him lose three straight games and be pulled for the first time all season in a loss to San Jose a week ago, Budaj has now posted two victories in a row. The veteran netminder stopped a season-high 46 shots (he previously had 39 twice) on Tuesday and held the fort as his team was outshot 23-3 in the final period.
–Sam Herr — Welcome to the AHL. Recently signed to an amateur tryout agreement after finishing up his collegiate career at Notre Dame, the 6-foot, 23-year-old found the back of the net in just his second pro game. Herr connected on cross-ice set-up from Matt Leitner to give the Reign a 4-1 lead.

Turning point
Ontario scored goals in a 38-second span in the second period, Forbort’s second of the year followed by Herr’s mark, this after the Heat’s own power play goal by Arnold had cut the lead to 2-1.

Stat fact
–2 – Assists for Adrian Kempe, his first multi-point game since Jan. 8, which was his first game back from World Juniors.

This and that off-ice
Former Reign forward Valentin Zykov skated for the first time with the Charlotte Checkers on Tuesday. Zykov, sent to the Carolina Hurricanes organization in the Kris Versteeg trade, left the Reign nursing an elbow injury. If the playoffs started today the Reign would face Charlotte in the first round. … The San Diego Gulls clinched a playoff berth on Tuesday in a thrilling 5-4 comeback win in overtime over Bakersfield in which they scored four unanswered goals.

Next up
The Reign will play their last regular season home game on Friday against Bakersfield at 7 p.m., the first of a home-and-home series. Ontario is 6-4-0-0 against the Oilers affiliate this season. It’s hopeful that captain Vincent LoVerde (neck/throat) will return to the lineup after missing the last nine games.