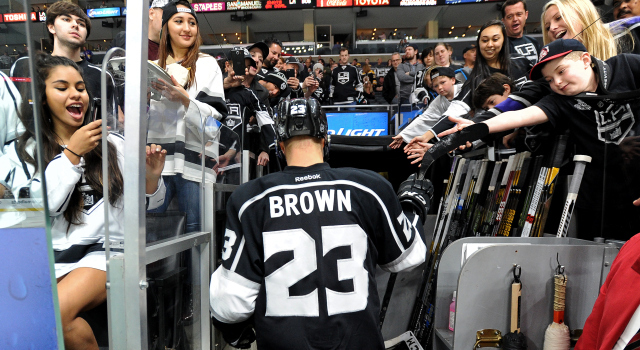 In Dustin Brown’s first season as a Los Angeles King, the team won 28 games. They didn’t qualify for the playoffs in any of his first five purple-and-black-clad seasons.

“It’s always good to be a part of that,” Brown said. “I think that was probably a byproduct of what happened to us last year as a group. We weren’t too happy about missing the playoffs. I think we were more consistent throughout the year, we didn’t have those long five, six, seven-game losing streaks like we did last year that ultimately ended up costing us. It was something that I was unaware of until now, so it’s always nice to be a part of something like that, but now the fun’s going to begin here, starting tonight, really.”

Tonight’s game, in case you haven’t heard, has major implications towards who wins the Pacific Division. Anaheim, which has claimed three straight division titles, has a game in hand – Saturday’s interconference league finale Sunday in Washington, D.C.

“It’s obviously a big game for us and for them as well with first place kind of hanging in the balance,” he said. “One of our goals was to try to get home-ice, and this game goes a long way towards getting that, and then you add that it’s the Ducks, so it should be a pretty playoff-like atmosphere and playoff-like game.”

It’s not an entirely different set of circumstances from San Jose’s visit in the 81st game of the season four years ago. With both teams vying for a Pacific Division title, the Sharks erased a two-goal deficit and won in a shootout in a game most remembered for Ryane Clowe’s unpenalized interruption of a Jarret Stoll rush down the right wing by interfering with play from the bench.

“For some reason I have stuck in my head that we clinched like five minutes into our game, so it went from like a really huge, important game for us to make the playoffs, to now it’s a positioning thing,” Brown said. “For some reason that sticks in my head. I remember that it was like ten minutes into the game that someone had lost, and we then clinched, and going into the game, ten minutes prior, it was like ‘we need to win this game to make the playoffs’, so it was kind of a weird scenario.”

“It’s first place, it goes a long way for who’s going to finish first, and both teams are fighting for that I think, and ultimately we’re going to have to play them to go where we want to go, so it’s a big game.”

If the Kings are to emerge with a win in tonight’s rivalry, they’ll be looking to raise their level of performance from a stretch in which they’ve compiled a 3-6-0 record since clinching a playoff berth.

“I think we’ve been struggling pretty much ever since we clinched,” Brown said. “We haven’t really played the type of hockey that we want to play, but I think we’ve addressed it internally, and it’s not like we’re oblivious to the fact that we haven’t been playing well. Hockey’s a funny game, it’s the same group of guys that were rolling three-four weeks ago, so it’s [about] finding that swagger.”