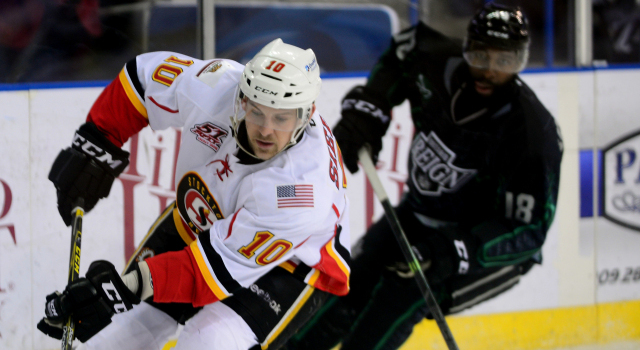 –The Reign clinched the Pacific Division title with the victory.

–The game marked the 12th and final meeting of the regular season between the Heat and Reign. The Reign won the season series with a mark of 7-4-1-0.

–Goalie Peter Budaj tied a season-high with his 19th straight start and made his league-leading 39th victory by making 46 saves.

–The Reign saw two special teams streaks end: Their perfect PK run ended at 51 straight on Bill Arnold’s second period goal, but they broke an 0-for-15 power play streak on Michael Mersch’s 23rd of the year.

–Kris Newbury has two goals and one assist in his last four games, this after going goalless in 20 straight contests before breaking that streak on March 30 against San Jose.

–Mersch’s power play deflection gets the Reign on the board in the second period after a scoreless first (videos courtesy of Sheng Peng):

–Nick Ebert’s second goal of the season from the point and on the power play puts the Reign up 2-0:

–Bill Arnold tips a Brett Kulak shot on the power play, ending the Reign’s perfect PK streak at 51 straight kills and makes it a 2-1 game:

–Derek Forbort stretches the lead back to two on a PPG from the point in the second period, his second goal of the season:

–Ontario goes up 4-1 on Sam Herr’s first pro goal. Herr just recently signed an ATO after completing his college career at Notre Dame and here he’s set up by Matt Leitner as the fourth-liners contribute. The goal comes just 38 seconds after Forbort’s: