Waking up with the Kings: April 5 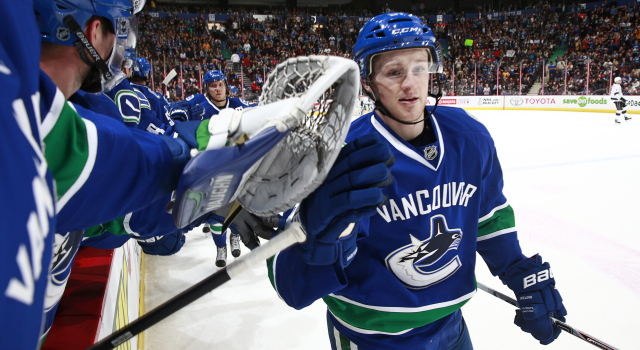 Several abbreviated thoughts from Monday’s 3-2 loss to the Vancouver Canucks:

-One reason why the Kings weren’t able to pocket two points on Monday stemmed from their inability to grab a two-goal lead when controlling play early in the first period. Los Angeles was all over Vancouver for the first seven minutes of the game and cashed in on a Tyler Toffoli net-crashing bang-in, but after jumping out to an 8-1 lead in shots on goal, Andy Andreoff took a penalty that blunted the team’s momentum as the teams split the final 10 shots of the period. Andreoff, to his credit, was pretty good in the remainder of his ice time and earned a go ahead-assist on a patient feed to Kyle Clifford in the second period, while Toffoli had a chance to double the lead on a shorthanded breakaway, but the puck never settled as it skidded through the offensive zone, and the sniper didn’t get a ton on his forehand-backhand move on Ryan Miller. That allowed the Canucks to cash in on one of their two last-minute-of-the-period goals, a deflection off the leg of Emerson Etem after Derek Dorsett had snapped the puck towards the front of the net.

-On the other hand, this wasn’t likely to be a game like the previous two in the series, which were won by the Kings by an aggregate 10-1 score. Despite personnel challenges, Vancouver has strung together several standout performances in a row, and though the Canucks have struggled on home ice, this game had one-goal decision written all over it and ended with a predictable 3-2 score. Ultimately Los Angeles got into penalty trouble, as has been an issue that has raised its head at times this year, and Brayden McNabb was called for an illegal check to the head 49 seconds into a Vincent Lecavalier slashing minor. When the Sedins and Jannik Hansen, who is having a career year, are afforded 71 seconds of a five-on-three, that’s a difficult situation to claw out of. Credit Henrik Sedin for a slick saucer pass to Hansen to tie the game, and for Jared McCann, a 19-year-old-rookie, for forcing Dustin Brown into bobbling the puck after a Vincent Lecavalier faceoff win. There was immediate pressure on the right defenseman by McCann off the faceoff, which appeared to cause Brown to second guess his pass back to the right point, and as a result, it dangerously slid off his stick and into no-man’s land. It was a heads-up play by McCann, but given that the play originated on a faceoff win, in the offensive zone, and resulted in an immediate goal against, I’m not sure I want to know the words crossing through Darryl Sutter’s mind at the time. I’m not sure how much we learned from Monday night’s game.

-So the Kings aren’t playing their best hockey right now. Speaking with the players, I do get the feeling that there is concern and some frustration that the grasp of their own playoff and division-leading destiny has loosened, but I’m not sure if the coaching staff is overly preoccupied with the recent stretch of events since having clinched a playoff spot. At least, when conversing with the media, there is not any demonstrable concern. The road performances have been sub-par since the Chicago-Dallas back-to-back, which obviously has to be improved if the team wants to make a run. Related: Water is wet. But, since clinching, Drew Doughty has surpassed his average time on ice in only one of nine games. Alec Martinez is day-to-day, and his presence last night was missed as the team was challenged in gaining clean zone entries during a second period in which Vancouver didn’t cede much territorially. While dealing with personnel challenges, the coaching staff is adjusting minutes so that all players will be most equipped to enter the playoffs at or near the top of their games. The proof isn’t necessarily in the numbers, as several players aren’t quite there during this late-season stretch of games, but keep in mind the team was playing OK-if-unspectacular hockey at the conclusions of the 2011-12, 2012-13 and 2013-14 seasons as well, and they won a combined 10 playoff series in those three years. I’m not sure how much we actually learned from Monday night’s game. 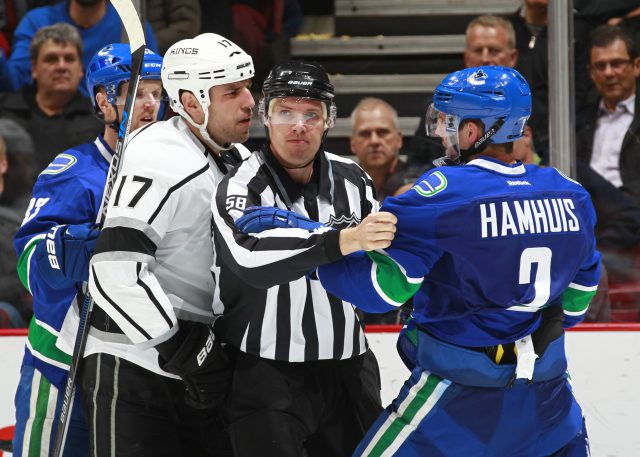