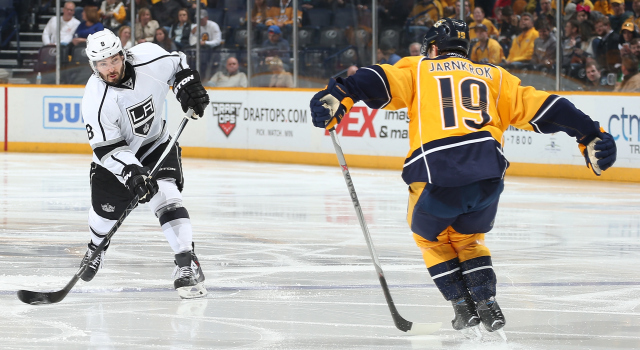 Steve Duchesne became an NHL defenseman in the time and place that allowed his skills to flourish: The mid-to-late-1980’s Smythe Division.

The dynamic skater and adept puck mover led the Kings in defensive scoring in his first five years with the team after joining the club with fellow rookies Luc Robitaille and Jimmy Carson in 1986-87. He topped out with 25 goals and 75 points in 1988-89.

If Drew Doughty played in the freewheeling Smythe, would he feel at home?

“Back then, go end-to-end, shoot it along the ice, I think I could do that,” Doughty said.

But Doughty is such a complete player that the personal accolades almost seem secondary, and though he passed Duchesne in points by a Kings defenseman – his assist on Jeff Carter’s first goal Thursday night moved him into sole possession of second place with 316 – Doughty has been a part of the more important team accolades. While the team had several star players in the late 1980’s, none of those Kings teams, prior to 1993, ever advanced past the second round of the playoffs.

“I would say Drew would say his best years would be winning a Stanley Cup, being a great player in the playoffs, going to a conference finals, winning a Stanley Cup [again], playing in All-Star Games, playing in the Olympics,” Darryl Sutter said. “He would definitely say those would be his best seasons. So he was able to get team accomplishments this year by being a playoff team again, having a chance at a division title, which he hasn’t had, all those things I would guarantee you that Drew would rather talk about than those things.”

And he’s right. Doughty is always happy to oblige reporters asking about his chances for a Norris Trophy or a spike in his production, but any insight shared pales in comparison to the sheer, unadulterated emotion exhibited in the team’s many late-season moments of accomplishment. To Doughty, it’s not about the number of goals, but the quality and importance of the goal being scored.

Still, this year he has experienced a surge in production. Part of that has come on the power play, where nine of his 14 goals and 24 of his 49 points have been generated. His only other NHL season in which he finished with a greater number of goals, assists and points was 2009-10, when he amassed 16 goals and 59 points.

“I think I’m just doing a better job of putting more offense in my game,” Doughty said. “I think early on in my career I was pretty good at offense, I always had the ability to do it, and I was more free to do it back then, and then I think I really started focusing on my defense every game a lot, and trying to grow that, and that maybe kind of took away from the offense a little bit, but I’ve worked on getting my shots through and hitting the net. I’ve done a good job at that this year, and pucks are going in for me. Sometimes you just get lucky.”

Of course, this production has spurred a Los Angeles team that often operates with an advantage in puck possession but is widely known for being one of the league’s stingiest and most difficult teams to play (and score) against. Though that may serve as a challenge towards generating individual production, it precipitates greater team-wide success.

“I think we’re usually one of the lower-scoring teams in the league,” Doughty said. “I don’t hate that at all, I’d rather be on a better defensive team than a high-scoring team any day, but yeah, sometimes it’s a challenge, but it’s a challenge for all of us. I think we can be a higher scoring team. I think we have all of the talent in the world to do it, and we just need to start doing it, really.”

Continuing the continued all-around maturation in his game, Doughty will have another opportunity to add to his team trophy haul before he approaches another Kings player milestone: Rob Blake’s 494 points.

“I’m not sure how many he’s beating me by, but I’m going to try to catch him,” he said.

Drew Doughty, on starting the sequence that led to Jeff Carter’s second goal Thursday:
I think the puck just kind of squirted loose, and I got the puck and I had a forechecker on me, and I really didn’t have any outs at that time to move the puck, so I had to kind of be patient with it and make a few moves to kind of get him off my back, and then one I created some space I just gave it to Brayden, he made a great pass to Looch and then Looch made a great pass to Carts.

Doughty, on the frequency of his communication with Rob Blake:
Quite a bit. He doesn’t even have to approach me, I’ll just go up there and kind of talk to him about things, what he’s thinking about my game, what he’s thinking about the d-corps’ game overall and how I can help make the other guys better and make myself better. He’s been great for me, he worked with me this summer looking over my shots, seeing how I could get my goals up, and I’ve done that this year compared to last. He’s helped me a lot and he’s a great guy to have up there to help defenseman especially, because he’s been through it all and you can learn a lot from him.

Doughty, on whether Blake said anything last summer that resonated with him:
Just more – he wanted more slap shots from me. I had 16 goals one year, and a lot of times that year, it was just shooting one-timers, or getting the pock, stopping it, and taking a slap shot, and I kind of got away from that since that second year in the league, coaches were always saying ‘just take wrist shots, get it down to the net, down to the net’ and they weren’t getting through as much. A wrist shot is still a good play from up there but I feel like the slap shot less people are willing to block, so it finds its way through. 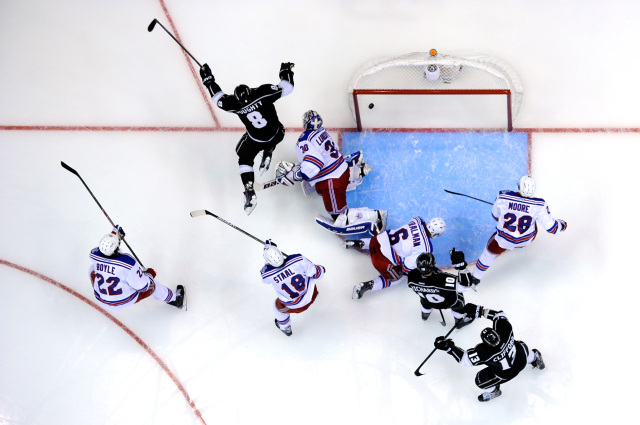