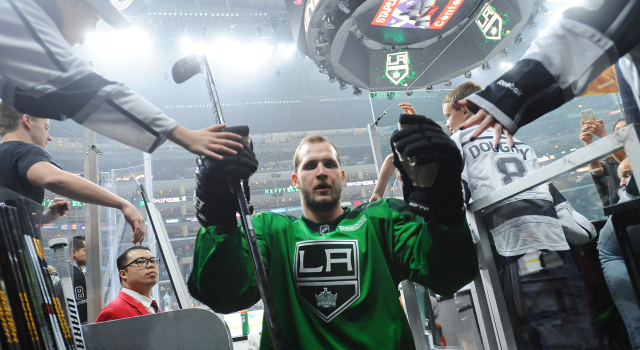 The 2015-16 season has been a virtual write-off for Matt Greene, who has unfortunately spent more time in doctors’ offices and on a surgeon’s table than he has on the ice. He appeared in the first three games of the regular season, attempted to rest and rehab as he recovered from an upper-body injury, and eventually on December 3 underwent shoulder surgery that put him on the shelf long-term.

Greene resumed skating earlier this month – he also underwent a recent procedure to clean up his elbow – but isn’t close to returning to game action. Speaking with reporters after the team’s practice, in which he participated, he twice used the term “long ways off” to describe any potential timeframe for a return.

“They’re doing me a favor right now of being out there. I think that’s basically the equivalent of riding the stationary bike,” Greene said. “I’m just trying to get into shape, and I’m a long ways off of playing. Some days you see me out there, and other days, when Darryl wants to really have a serious practice, I probably won’t be. I think that’s just them doing me a favor today and letting me get out there and skate with the guys.

Any elbow discomfort is gone; Greene said he’s feeling better following that procedure. Darryl Sutter had recently cast doubt on any potential availability prior to the start of the playoffs, and with the postseason beginning in two weeks, it appears highly doubtful he’d be available for consideration at the outset.

While Greene has been out long-term, Kris Versteeg continues to make progress in his attempt to return from a foot injury sustained when he blocked a Dennis Seidenberg shot two Saturdays ago.

He’s getting his pace and timing back in practices and is unsure when his return will come but says that he’s gradually feeling better.

“Right now it can be a blessing in disguise, too,” he said. “You just sit back and understand where you are and what you need to do on the ice, and hopefully I can just learn as much as I can while I’m out and take all the knowledge and try to come back in and help out again in whatever way I can. Like I said, some nights might be more than others, and I just try to contribute, because … I’m only here for one reason, to win a Cup.”

Though he started the season in the Eastern Conference, Monday’s game against the San Jose Sharks was the fourth time Rob Scuderi had faced Los Angeles’ Northern California rival this season. With some personnel changes and a new head coach in place behind the Sharks bench, he was asked whether there have been any tweaks or wrinkles in San Jose’s systems since he became overly familiar with the Sharks, whom he faced in playoff series in 2011 and 2013.

Nor is the low-ceilinged, sound-trapping, cacophonous SAP Center and easy road building.

“It’s great,” Scuderi said. “As a player, you like to play in a good atmosphere. You’d rather have it be your home ice – and I do think we have a great atmosphere on home ice – but if you go away, it’s more fun to play in a place that has a good environment rather than a dead fish type of place.”

The veteran was also asked about several questionable third periods over the past week. Beginning with the Winnipeg game, Los Angeles has been outscored 8-1 in the three most recent third periods.

“I’m not sure what it is, the root reason, but certainly it needs to be addressed,” he said. “You’re coming down the stretch and into the playoffs, and that’s what most of the games are. It’s a one goal game or a tie game. That’s what it is, and you’ve got to learn to play the right way in those situations if you want to win.”

It’s a minor footnote that we’ll likely forget very soon, but why wasn’t Micheal Haley assessed an unsportsmanlike conduct penalty (or an instigator) for dropping his gloves and attempting to goad Kyle Clifford into fighting when Clifford had no intention of doing so?

“I asked [referee] Wes [McCauley], and he said if I would’ve dropped the gloves it would’ve been an instigator for him,” Clifford said. In such an instance, Rule 46.2 – Aggressor would have applied.

“The aggressor in an altercation shall be the player who continues to throw punches in an attempt to inflict punishment on his opponent who is in a defenseless position or who is an unwilling combatant,” the rule reads. (Scroll to page 81 of 223 to find that rule.)

But there were no punches thrown, so if there would have been scrutiny on a player for dropping the gloves when the other player declined to engage, it likely would have been at the discretion of the referee over whether to assess an unsportsmanlike conduct penalty.

Clifford ultimately fought Haley later in the game and said that he gets those taps on the shin pads and other invitations somewhat frequently over the course of a season.

During Wednesday’s practice, Kings forwards were grouped by colored jerseys and aligned as such: