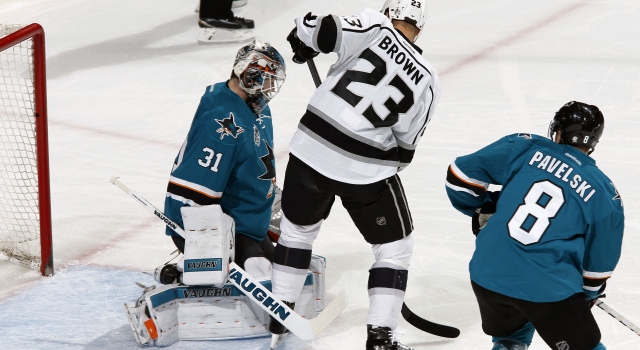 On the difference in the game:
They scored a power play goal early in the third.

On the Kings’ performance:
I think we did what we wanted to do for the most part. We had a good first period, scored a power play goal, we didn’t take a penalty until late in the first, we were able to kill it off early in the second. Bounced back after they scored to go ahead against the fourth line. Bad forecheck coverage by those three guys. Tie it up, go into the third. That’s what you want.

On how the approach is affected when facing a team as frequently as San Jose:
I think there are a lot of personnel changes on both teams. You’ve got a lot of guys who haven’t played against them in big games, and they probably have some guys that feel that way, too. I think both teams have a pretty good grasp of how each other plays.

On San Jose wanting to pick up a win to clinch a playoff spot:
They obviously wanted to, and they did.

On any evolution in San Jose given the frequency of the meetings and new personnel:
We see them fairly regularly. Play ‘em five times. They’re one of the teams that we do play five times.