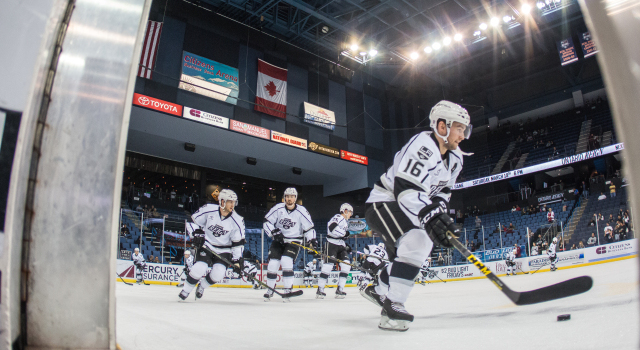 It wasn’t the way head coach Mike Stothers envisioned it, but the Reign have clinched a berth into the 2015-16 Calder Cup playoffs.

With San Jose’s 3-1 loss to San Diego on Sunday, the Reign (39-16-4-1, .692 winning percentage) automatically earned a spot, becoming the second team to clinch after the Toronto Marlies did so last week.

“I don’t even want to talk about it, don’t even go there with that,” Stothers said in regards to the playoffs after Saturday’s 4-2 loss to Stockton. “I’ve said it before. We’re not backing into anything. [If] you’re going to make the playoffs, you better damn well earn it. And that’s with winning.”

As of now, Ontario holds the top spot in the Western Conference, good for home-ice advantage through the Western route. The Reign are looking to defend their Calder Cup title from a year ago, which the Kings’ AHL affiliate earned in its last season in Manchester, N.H.

The Reign have eight games left in the regular season, which ends on April 16 against San Diego. Their next game is Wednesday at San Jose at 7:30 p.m. PT.

Previously, with the AHL team in Manchester, the Monarchs made the playoffs the last six seasons in a row and 13 of the last 14 from 2001-15. With today’s news, the AHL affiliate makes it seven in a row and 14 of 15.

The Kings affiliate won their first Calder Cup title in 2015 in Stothers’ first season, going through Portland, Wilkes-Barre/Scranton and Hartford before eventually defeating Utica four-games-to-one in the final.