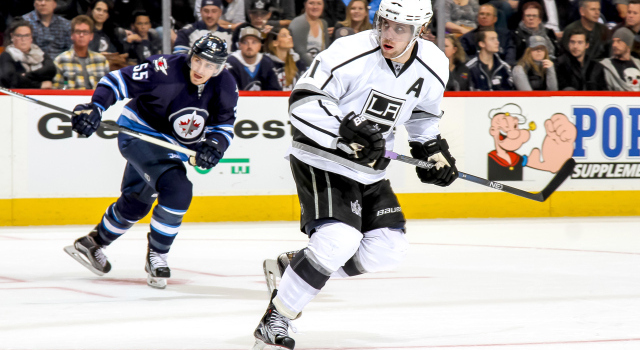 Good afternoon and a happy Easter from the charter plane, which is about to push back and begin taxiing in advance of the quick flight up to San Jose. A reminder: Because tomorrow’s game is an NBCSN game, you get Nick Nickson and Darryl Evans on KABC 790, and I’ll be back to blogging and tweeting about banal WHL minutiae and disseminating Jake Muzzin propaganda.

Though today’s practice was optional, there was still better attendance than what one would expect for an afternoon that followed a Saturday night home game. In addition to the scratches and several players populating depth lines and pairings, Anze Kopitar also got on the ice to break in a new pair of skates – he estimates he goes through a pair a month during the season – while Jake Muzzin and Kris Versteeg were among the handful of players on skates. Jhonas Enroth was the only goalie on the ice.

On Versteeg, he said that he continues to get better, day-by-day. He was wearing plastic skate protectors, accessories that he hadn’t used prior to two Saturdays ago, when he was struck by a Dennis Seidenberg slapshot from a distance he estimated at six feet. Versteeg said that he’s not traveling to San Jose, but he looked good in his skates on Sunday afternoon as he continues to work his way back towards game action.

I didn’t chat with Darryl Sutter, but I did sit down with Mike Futa to learn a little bit more about Michael Amadio, whom Futa saw (and congratulated in person for signing his first pro contract) two weeks ago in North Bay. I’ll share several of Futa’s thoughts; we also spoke about Matt Schmalz, who joined AHL-Ontario after the conclusion of his season with OHL-Sudbury. Several of those thoughts may be shared later this week as part of an Ontario Reign Insider story.

More to come from the air while en route to the Bay Area. Enjoy your Sunday, Insiders.