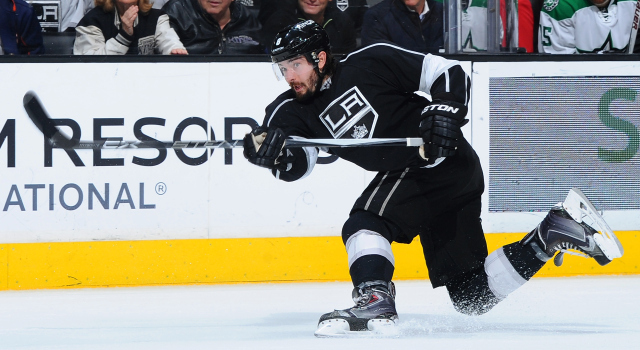 The Los Angeles power play hasn’t scored since Vincent Lecavalier’s deflection 4:52 into the first period of the Kings’ 4-3 overtime win over the Washington Capitals on March 9. Since that goal, the man advantage has been rebuffed in 20 consecutive opportunities.

It hasn’t been for a lack of effort or quality looks.

In Tuesday’s 2-1 loss at Minnesota – a game in which the Kings out-attempted the Wild 74-32 – Devan Dubnyk was the best player on the ice on either team, and especially so on the penalty kill, where he robbed Drew Doughty with a collection of quality glove saves. Doughty also fired wide when generating quality looks during a performance in which he amassed a game-high 13 shot attempts, including four in 2:53 of power play time.

“He was the guy that was open, so we gave him the puck, and hopefully next time he can actually score,” Anze Kopitar said with a lighthearted smile.

It’s noteworthy that Doughty, who leads the Kings with 22 power play points and is tied for the team lead with nine power play goals, is able to so consistently produce high-quality attempts with the blade of his stick even though he’s someone that the opposition clearly has to game for with when defending Los Angeles’ power play, which still ranks ninth in the league despite the recent lull.

“I would think that a lot of it would have to do with one of the best passers in the game in Kopitar putting him in a position where he should score,” Darryl Sutter said.

That’s not a bad combination, and with 12 assists, Kopitar leads all L.A. forwards in power play helpers. The duo – along with Jeff Carter, Tyler Toffoli and Jake Muzzin, who have often been comprising Los Angeles’ top unit – will have an opportunity to break through against a Winnipeg team that enters tonight’s game with the second most minor penalties taken in the NHL while ranking 25th in penalty killing.

“I thought our power play was pretty good last game,” Doughty said. “We were creating a lot of shots, you know I could’ve put a few in the net that the goalie made big saves on, so that was probably the best it’s been in a while, but the bottom line is, we’re still not putting pucks in the net and we need to. Our power play’s been pretty good all season, we were in the top-10 for a long time, and even top-five, I want to say, and right now we haven’t been living up to that, so we need to get back to doing those things.”

But again, back to the thesis question – how does Doughty continue to generate looks, even when the opponent watches video, knows him well and game plans for facing one of the league’s most elite power play facilitators?

“I just have to be active, especially when they’re down to only four men, obviously they’ve got to leave one man open, so if I’m moving around a lot and finding soft ice, open ice, then I’m able to get my shots off,” he said. “And that’s one thing, they just want me shooting as much as I possibly can. I’m trying to do that, and eventually they’ll go in.”

It’s part of a sixth sense of knowing and understanding where teammates are going to be. Given that there has been continuity on the top unit’s personnel, for the most part, it’s something that has developed naturally. Also, having some of the league’s most elite players on the ice at the same time doesn’t hurt.

“I guess we kind of know where we want each other to be at certain times, but a lot of times [there are] just different plays we have and whatnot, and they know when we run that play that you’re going to be in a certain spot,” Doughty said. “That’s kind of what you need on the power play, you’re not really trying to fool your own teammates, you’re trying to find that ice, and sometimes your teammates aren’t going to know exactly where you are on the ice, but if they know you’re going to the same spot most of the time, then they can kind of throw it blind there and hope you’re there for the shot. It’s definitely a lot of getting used to and knowing where your teammates are.”

It’s important, because games are decided by goals, not high-quality scoring chances.

“Well, there’s five guys out there. He should be scoring,” Darryl Sutter said. “Those are wide open opportunities. The highlight reel should be ‘the puck in the net,’ not that ‘it’s a good chance.’”

Jake Muzzin, on the team’s power play movement in Minnesota:
We got some good looks for sure, their goalie made some big saves. We’re shooting, we’re getting the puck back, just have to execute a little bit better on our shots maybe, and maybe be a little harder around the net, get a loose puck and put it in the net.

Muzzin, on getting Doughty space on the power play:
When you’re quick with the puck, you create space for your guys, and that’s one of our guys that we want open from that position shooting the puck, so when we’re executing and we’re quick with it, and recovering it, we look to attack right away and Drew is ready in that spot.

Anze Kopitar, on the push to return to the playoffs:
Obviously it feels a lot better, after last year I think everyone was pretty disappointed with the way the season ended, so this year, coming back, we had a little bit of a chip on our shoulder. Obviously the start was not great, but we never really doubt ourselves about anything, we knew we were going to get going. Now we’ve put ourselves in a position where we’ve got to sharpen up our game, obviously we’ve clinched already, but we know there are still some games left here, and you want to make sure come April 15th, right around there, that you want to be on your game, and now is a really good time to sharpen up.

Kopitar, on the power play’s puck movement as of late:
Last game in Minny, I thought we moved it pretty well, we just didn’t get rewarded. I think if we keep doing those things, eventually it’s going to go in.

Tanner Pearson, on playing with Nic Dowd and Tyler Toffoli:
Yeah that line was actually happening in the preseason, too. I’m familiar with Toff obviously, and you know, Dowder works hard, and what you see is what you get out of him, so he’s going to play the same way as he does down in the A, and I think from watching the game Tuesday night, he did a pretty good job in his debut.

Pearson, on playing with Dowd as opposed to a center like Jeff Carter:
I would assume that Dowd would keep it more simple obviously. Carts is a veteran player, maybe not the easiest comparison, but Dowder is a good player, he works hard, and that’s how he’s going to get things going, by his hard work and creating stuff.