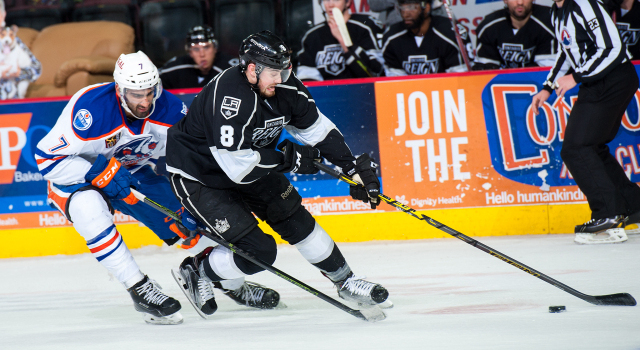 Reign game breakdown
The Reign are a different team when scoring first. And they’re a perfect team when leading after one period and also perfect when leading after two. After allowing the first goal in their previous three games, the Reign used a snipe by Joel Lowry just 3:20 in on Tuesday to set the tone in a 5-2 road victory at Bakersfield (27-23-6-2, .534 winning percentage). Jonny Brodzinski followed Lowry’s tally just 28 seconds later and Ontario (38-15-4-1, .698) eventually led the Condors 3-0 in the first period at one point on a deflection by Ryan Horvat. From there, they hung on, which didn’t delight head coach Mike Stothers afterwards, but at this time in the season Stothers has said it is about the end result — and this time it was a victory that put their magic number to reach the playoffs down to 3 with 11 games left.

Three stars
–Joel Lowry – The rookie found the right time to score just his second goal of the season. Lowry’s goal from the right circle put the Reign ahead early and his hard forecheck — though he didn’t earn an assist on the play — set up Justin Auger’s second period goal at 7:44 that put the Reign up 4-1.
–Michael Mersch – The left winger took last Saturday’s 4-1 defeat to San Diego, a game in which he finished minus-4, pretty hard. He responded with a much better effort, assisting on Brodzinski’s goal and taking a hard hit from Tyler Pitlick late in the third to set up an empty-net goal by Sean Backman.
–Peter Budaj – In his 51st game of the season, Budaj tied his season-high by stopping 39 shots. As has been the case all season, the veteran netminder clamped down with his team leading, surrendering just one goal as the Reign gave up a lopsided 32 shots in the second and third periods. His goals against remains under 2.00 at an impressive 1.70.

Turning point
The Reign have not lost a regulation game all season when scoring first, so Lowry’s early strike followed by Brodzinski’s less than 30 seconds later that gave the Reign a 2-0 lead just 3:48 into the game did the job. Although Ontario let off the gas pedal a bit and were outshot 32-16 in the final two periods, there’s still no denying that they’re now 28-0-1-0 when scoring first and a perfect 22-0-0-0 when leading after the opening period.

Stat fact
–9 – Nine of the Reign’s last 14 goals have come from different players. That stat spans their last four games, where they’ve gone 3-1. Of those nine scorers, neither of them have the last name Mersch or Dowd, a display of the team’s depth when it’s going on all cylinders.

This and that off-ice
Center Nic Dowd was called up Tuesday afternoon to the Kings and made his NHL debut in a 2-1 loss to the Minnesota Wild. This game was the first that Dowd missed for the Reign all season after appearing in the first 56. The 25-year-old fared well in his first NHL game, leading the Kings in the faceoff circle with a 63% win rate. Here’s what he had to say after the game, in which he played 12-plus minutes. … Forward Jordan Samuels-Thomas (lower-body injury) was out of the lineup.

Next up
The Reign host the Stockton Heat in a back-to-back starting with Friday’s 7 p.m. game. Ontario is 5-2-1-0 against the Flames affiliate this season.