Waking up with the Kings: March 22 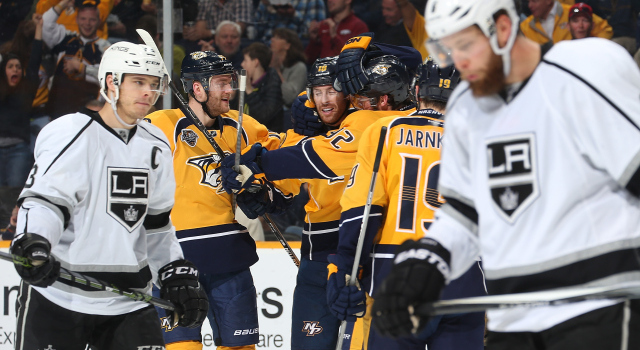 Several abbreviated thoughts on the Kings’ 5-2 loss in Nashville:

-After a conservative, chess match-like first period in which the Predators had the edge in scoring chances but the Kings took more shots on goal, a three-goal second period outburst turned Monday night’s game into a boat race, even if Los Angeles scored twice in the first half of the third period to make things awfully interesting. There were two critical stretches of play in the game. The first occurred when Tanner Pearson, trailing 1-0, angled towards Pekka Rinne on a contested breakaway and was able to open up the goaltender before slipping a backhand between his legs that trickled just wide of the far post. Shortly after that maneuver, the Kings were caught in a line change that resulted in a too many men on the ice call, and Mike Fisher scored on the ensuing power play in what what very well may have been a two-goal swing. The other key turning point, obviously, was Ryan Johansen’s deflection goal on Shea Weber’s wrister towards the net midway through the third period that heavily blunted Los Angeles’ comeback after Drew Doughty and Alec Martinez had scored to pull the Kings within one and Nick Shore’s line had opportunities from close range to find the equalizer. While L.A. showed resilience in nearly overcoming a three-goal deficit, the Predators are a very good hockey team that notched one of those statement-type wins in coming away with their first victory against the Kings in three tries this season. 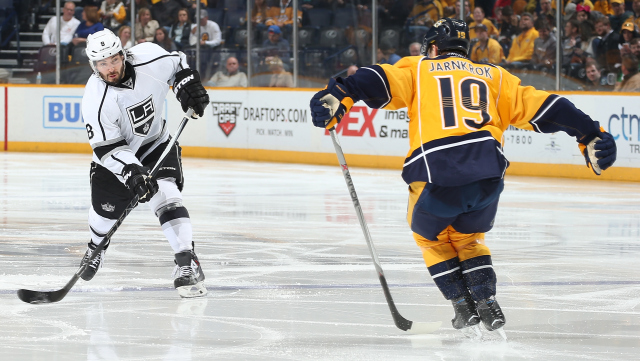 -Nashville’s penalty killing entered the game red hot with 22 consecutive kills and finished the night with a 4-for-4 performance. Los Angeles’ power play moved the puck around pretty well, especially the first unit, but weren’t able to break through with a “big” power play goal that could have tipped the scales in the game. Without the services of Marian Gaborik or Kris Versteeg, Luke Schenn saw an uptick in his usage with the man advantage and finished with 3:19 of power play time. 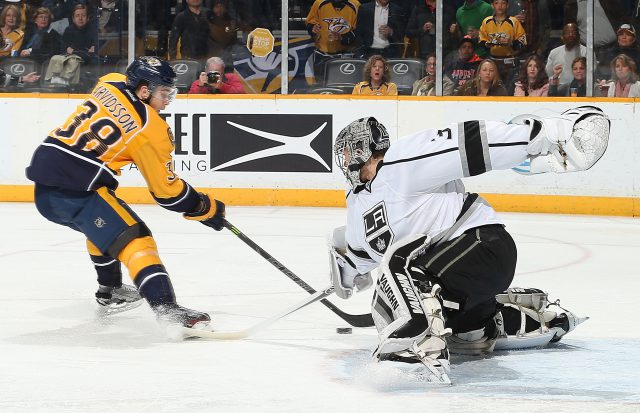 -Though Drew Doughty scored and Anze Kopitar rang up a pair of assists, the Kings’ top players were only OK in the loss, which isn’t really a major concern considering the types of contributions they had provided over the past two weeks. They were at their best in the third period, though Jeff Carter, Tyler Toffoli, Milan Lucic and Kopitar combined for six shots on goal, with four of those coming from Kopitar. At even strength, that group combined for four shots on goal. Credit, again, is due to a Predators team that entered the night tied for the league lead with 27.3 shots against per game. The Kings rang up 30 by virtue of a 13-shot third period in which they tilted the ice, but the home team did a good job of controlling the puck, forechecking and limiting clean entries out of the defensive zone, which put a cap on the number of rush changes Los Angeles was able to generate. 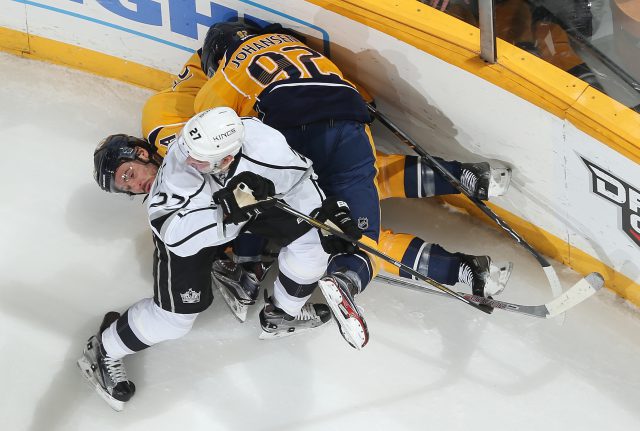