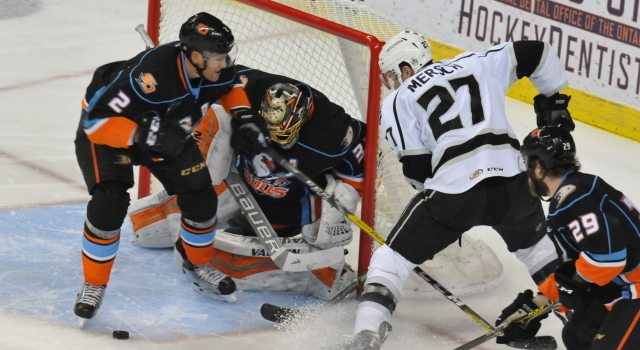 Reign game breakdown
Michael Mersch referred to his minus-4 rating five times after Saturday night’s 4-1 loss to San Diego. It was a game to forget for the Reign’s first line (Mersch minus-4, Nic Dowd and Sean Backman each minus-3) and the rest of those wearing black and white jerseys. “It’s pretty unusual for those guys to have a tough night,” head coach Mike Stothers said. What wasn’t unusual and has alarmingly become more commonplace is Ontario not being ready at puck drop. For a second straight night they gave up the game’s first goal. This time it was 1:25 in on a rebound mark by Corey Tropp. Again in the second period, just 1:33 in, Ondrej Kase stripped Kevin Gravel of the puck and buried a low shot by Peter Budaj. The Gulls, unbeatable at 26-0-0-0 when leading after two periods of play heading into the game, added 27 to that record. They stopped Ontario on a power play to open the third and added to their lead at 9:37 when Antoine Laganiere scored on a 2-on-1 in 4-on-4 play with players in the box. When the Reign tried to engage San Diego physically, particularly in the third around Anton Khudobin’s crease, the Gulls did not bite. There were no fights, but there was plenty of nastiness. Derek Forbort’s first goal of the season was all the Reign could get by Khudobin on 23 shots on net, but it came too little, too late. An empty-netter by Stefan Noesen delighted the many Gulls fans in attendance with 13 seconds left in the game and the Reign were left to think, how can they beat this team? The Gulls improved to 7-3-0-0 against Ontario (The Reign are 3-5-1-1). San Diego remains the only team the Reign have a losing record against in all of the AHL. The rivals will meet again to end the regular season, a back-to-back in San Diego starting on April 15. Despite the loss, the Pacific-leading Reign (37-15-4-1, .693 winning percentage) saw their magic number to reach the playoffs hit 6 with 11 games left. The win allowed the second-place Gulls (33-21-2-2, .603) to gain a little bit of ground on the Texas Stars. 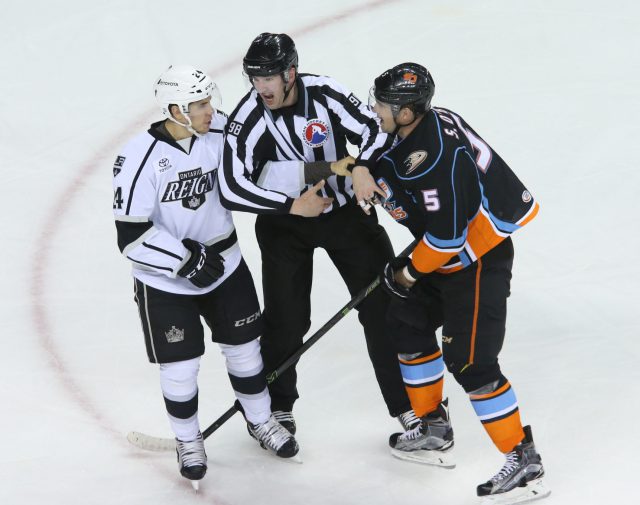 Best quote
Mersch, on the start to the game and Gulls’ early goal: “I made a terrible play on the wall. That’s been my bread and butter all year. Started with that and then I went minus-4 tonight. They scored four goals and we lost 4-1. Starts with my terrible start. We’ve been trying to have good starts and it was my fault.”

Three stars
–Corey Tropp — Acquired from the Blackhawks at the trade deadline, Tropp has played in just eight games with San Diego and Saturday he made life miserable for Ontario early. Mersch received a breakout pass on the left wall but when trying to move the puck to a swinging Dowd, it was intercepted by Tropp inside the blue line. Tropp did a give-and-go with Matt Bailey and let go from the right circle. The rebound hit Budaj and went high in the air and Tropp crashed the net and cashed in. The winger factored in again in the third period assisting on Antoine Laganiere’s 11th of the season as the two finished a 2-on-1 against Kurtis MacDermid that put the Gulls up 3-0. When asked why San Diego is so tough to beat, Mersch answered with this: “I don’t know. I honestly don’t know. Seems like they have a different lineup all the time.” Insert Tropp into that statement. He now has four points in his last three games.
–Anton Khudobin — While Stothers attested the Reign did not test the Gulls’ 5-foot-11 goaltender enough, he still bested the AHL’s best in Budaj, making 22 saves for his fifth straight win. Assigned to San Diego by the Ducks two months into the season, he’s gone 5-1 against Ontario. On Saturday, his task was limited to making the first save most of the night as the defensemen in front of him cleared rebounds and limited traffic.
–Derek Forbort — The Reign defenseman isn’t keen on joining the rush too often, but he did a few times against the Gulls, the last resulting in his first goal of the season. Adrian Kempe used his speed to get around Gulls defenseman Jaycob Megna and nearly from the goal line found a streaking Forbort just atop the Gulls crease. Forbort one-timed the pass by Khudobin, ending his shutout bid with 7:29 left in the game. Forbort finished tied for a team-high with Backman with four shots on goal.

Turning point
The Reign finished 0-for-2 on the man advantage, but the one that will sting the most was their opportunity entering the third period down 2-0. Shane O’Brien took a late roughing call at the end of the second, giving the Reign 1:40 to work with to start the final period. They mustered just one shot on goal on that opportunity. “I thought our power play was OK,” Dowd said. “I didn’t think it was that bad. I think we have to contribute on the power play to win games like this. There’s not a lot of ice 5-on-5 so when those chances do come you have to take ’em.”

This and that off-ice
Kings forward Kris Versteeg left Saturday’s game against Boston after a Dennis Seidenberg shot hit in him on the left skate in the third period. If he is significantly injured, that could mean the Reign may lose a player to a call-up to Los Angeles. There is the hope that more should be learned of his status on Sunday.

Next up
The Reign will have a recovery day on Sunday and practice again Monday before taking on Bakersfield, a team on the playoff bubble, on the road Tuesday at 7 p.m. Ontario is 4-4-0-0 against the Oilers affiliate this season.