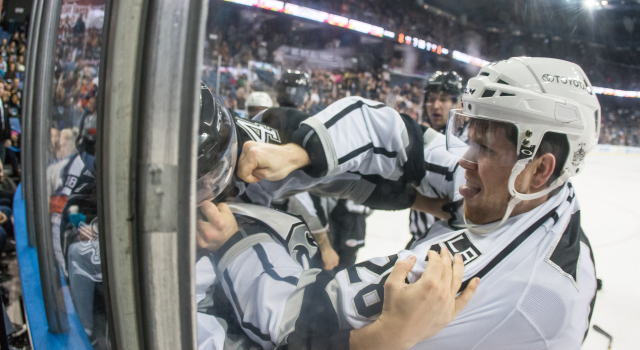 Reign game breakdown
Starts have not been their forte, but for the Reign, it’s all about how they finish. Spotting the Rampage two goals after 20 minutes and a sloppy defensive showing, Ontario scored five straight goals including three in a 3:06 span of the third period to capture a 5-3 win over visiting San Antonio on Friday night. It was the second straight comeback win against the Rampage (24-33-8-0, .431) for the Reign (37-14-4-1, .705 winning percentage) and it reduced their magic number to clinch a playoff spot to just seven points with 12 games remaining. A power play rebound goal by Justin Auger ignited the comeback at 8:03 of the second period, which was followed by Brett Sutter’s first of the game with 1:20 left in the period. With a new game at hand for the third, Ontario took the lead on a Jonny Brodzinski bullet at 3:53 and forged ahead on Sutter’s second of the night and a Sean Backman blast from the point. Peter Budaj made 20 saves to pad his AHL wins lead to 35.

Best quote
Backman, on the poor start and the eventual comeback: “I think it’s just kind of a reminder of how we can play. There’s no excuse for us to start like that. I don’t know if there’s one reason why we started like that or what but it’s kind of a reminder of the team that we really are and how we play when we actually do play.”

Three stars
–Brett Sutter – It’s safe to say that Sutter is fitting in just fine. In just his second home game since being acquired at the NHL trade deadline, Sutter scored his second and third goals in a Reign uniform. It was a statement game for the third-line center, whose veteran presence had been applauded so far. Friday was different, as he proved he can be a key contributor as well. For his first goal, the puck landed on his stick after a blocked Brodzinski shot and he immediately went upstairs from the right circle to tie the game late in the second. On his second goal, Sutter set himself in front of Rampage goalie Roman Will and lifted a backhander into the net. For good measure, he even instigated Mat Clark into a fight in the first period after Adrian Kempe was absolutely leveled by Clark. “Tonight felt good to get on the scoreboard but most importantly just a big come-from-behind win and an excited locker room after and that’s what we’re here for,” Sutter said.
–Jonny Brodzinski – We’ve seen flashes of Brodzinski’s scoring all season and his 11th goal was one of his best yet. The rookie blew by Rampage defenders at the blue line and from the right side went opposite side high on Will to put the Reign ahead 3-2. That goal came at the end of an otherwise uneventful power play. Playing on a line with Sutter and Kempe, Brodzinski earned his second three-point game of the season, assisting on Auger’s goal and Sutter’s first.
–Justin Auger – While Ontario struggled mightily on a 5-on-3 advantage midway through the second period, Auger and Kris Newbury were among the few players standing on the bench, watching and awaiting their chance to do some damage. When both hopped out to replace the first unit they connected for the Reign’s first goal. Newbury tossed a long shot in from the left point and the 6-foot-7 Auger was unattended and left to bury the rebound, his 14th of the season. Auger picked up an assist on Sutter’s second goal and now has three points in the last three games.

Turning point
If it wasn’t enough already that the Reign had taken a 4-2 lead on the quick goals by Brodzinski and Sutter, Backman completely deflated the Rampage with his 19th goal. As the puck squirted free off the right boards on a battle by Nic Dowd, Backman wound up and fired a slap shot over Will’s glove, ending the goaltender’s night at 6:59 of the final period. Will allowed five goals on 32 shots and was relieved by Spencer Martin, who had one stop the rest of the way.

Stat fact
–4:31 – The amount of time the Reign needed to score six total goals in the third period (3 each game) in two thrilling comeback wins against San Antonio. Including this one, the Reign came back from two-goal deficits each time, the last being a 5-4 win in San Antonio on March 9.

This and that off-ice
Sutter’s mother Wanda and brother Chris were in attendance for his second Reign home game since his acquisition at the NHL trade deadline. … Captain Vincent LoVerde missed his first game of the season due to injury and will be out for an extended period of time.

Next up
The Reign host Ducks affiliate San Diego on Saturday at 6 p.m. for the last time at home. The Gulls are the only team Ontario has a losing record against this season (3-4-1-1). “I don’t think that I’d be stepping out of line by saying they don’t like us and we don’t like them,” Stothers said. “I think that’s healthy. I can’t wait to put my head on the pillow and wake up tomorrow because I know it’s game day against San Diego, and I can’t wait.”