Waking up with the Kings: March 18 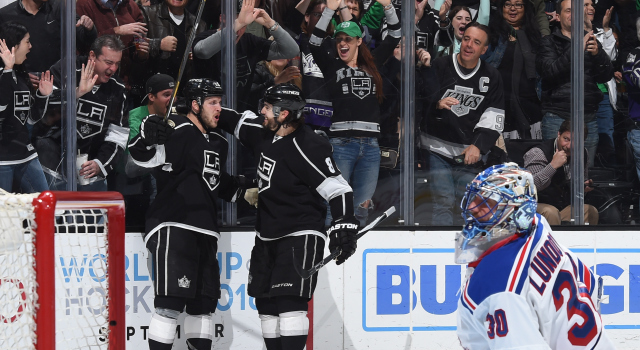 The Rangers holding a two-goal Staples Center lead before settling for overtime? What could go wrong? In a carbon copy script from a 2014 Stanley Cup Final game – there was an even a non-call on potential goaltender interference! – the Kings, the better team for the much longer stretches on Thursday night, quickly responded to go-ahead and insurance goals with important strikes of their own and emerged with an important two points following Ducks and Sharks regulation losses in the previous 24 hours. Territorially they were dominant against a team that entered the night with a lousy run-of-play rate but still boasted the second best five-on-five goal differential; New York has been Chaos Team in the third period, ranking third in the league with 80 goals in the final frame but also yielding a hefty 72 as well. (The Kings scored twice in the third, the Rangers once.) Ultimately Los Angeles was able to beat Henrik Lundqvist for the final three goals of the game on a terrific, no-look Jeff Carter feed to a net-crashing Kyle Clifford and a pair of Anze Kopitar deflections, a representation that they were able to break through against a very good Henrik Lundqvist by getting pucks and bodies to the front of the net.

The key, late-third period goal to tie the game was more borderline than it was controversial, and as Jim Fox noted on the Fox Sports West broadcast, if there are eight general managers watching that play, there could very well have been a split down the middle over whether Tyler Toffoli’s contact with Henrik Lunqvist was goaltender interference. After a short review, the referees deemed it a good goal, and that was probably the right call. Unlike Dwight King’s goal in the 2012 Stanley Cup Final – which was more of a controversial call than last night’s – Ryan McDonagh (who was also involved in the netfront battle with King two years ago) channeled Toffoli into the crease with his left shoulder, placing the forward in a tight spot that he would’ve had difficulty wiggling out of if he had more time to do so. There’s nothing cut-and-dry about the play; it was ruled a goal on the ice, and there wasn’t enough clearly discernible evidence to overturn that.

He won’t win the Hart Trophy, but Anze Kopitar has been putting himself back in the conversation for the Best Player In The NHL Right Now. He’s among the very most important to his team, and his five goals against New York this season lifted what very well could’ve been a 0-2-0 record to a 2-0-0 record against the Rangers. Those are enormously important points. He entered the night third in NHL scoring since November 20, and none of the players above him in the scoring race, where he ranks 10th overall, are as committed defensively as the Selke Trophy candidate. Credit is also warranted for both Alec Martinez and Jake Muzzin, who assisted with key minutes as Darryl Sutter shortened the bench and reduced the usage of Brayden McNabb and Rob Scuderi. The work that the team and coaching staff has done with both Martinez and Muzzin over the past three-to-five seasons is remarkable; Muzzin, in particular was excellent against New York, having registered six shot attempts, all of which were on goal, and blocking four shots. There was one turnover in his own end that was eclipsed by his otherwise poised puck-advancing play in another solid outing from a defenseman who has emerged as among the very best #2s in the league.