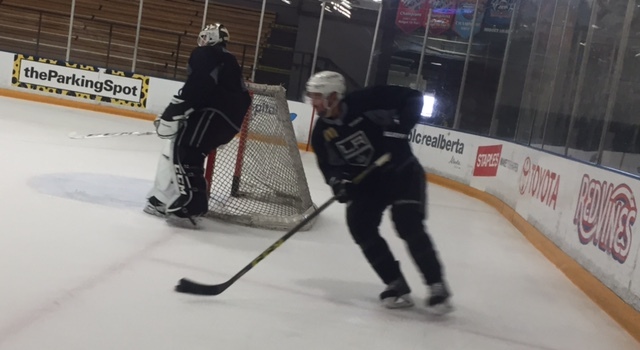 Good morning, Kings fans, and a happy St. Patrick’s Day to you. No, Mark Fitzpatrick is not expected to start in goal.

The team took the ice shortly before 10:00 a.m. and aligned as such up front:

-The team rotated through defensive pairs; don’t expect to see changes from the recent Scuderi-Doughty, Muzzin-Martinez and McNabb-Schenn mix. Jamie McBain and Andy Andreoff remained on the ice for extra work with Jhonas Enroth and the injured Matt Greene; don’t expect to see them in tonight’s lineup. Jonathan Quick left the ice first and is expected to start in net.

-The Kings versus The King. Antti Raanta stopped 22 shots and Kevin Klein scored both goals in New York’s 2-1 regulation win at Anaheim last night, setting the stage for Henrik Lundqvist’s first appearance in a game at Staples Center since he was beaten by Alec Martinez 14:43 into double overtime in Game 5 on June 13, 2014. Cam Talbot earned the win in net in the Rangers’ only visit last season.

Unlike the teams’ last meeting, a 5-4 Los Angeles overtime win at Madison Square Garden on February 12, New York will be at virtual full strength. Dylan McIlrath is week-to-week with a knee injury, though Rick Nash and Ryan McDonagh have returned, and ex-Hurricane Eric Staal will suit up with one goal, three points and a plus-two rating through his first eight games with his new team.

-More to come, Insiders, including Darryl Sutter quotes and a few words from Brayden McNabb.