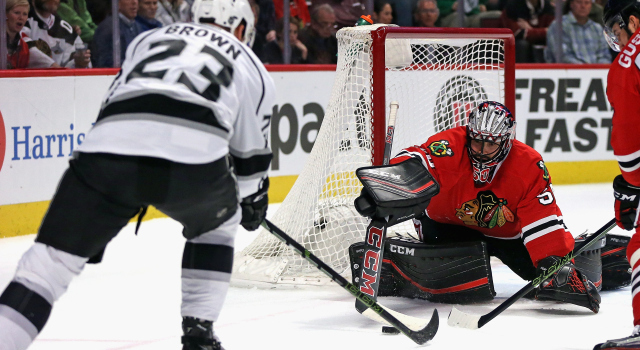 The 10-2 aggregate score of the Kings’ road wins over Central Division powerhouses Chicago and Dallas shared similar blueprints: Score early, double the lead shortly thereafter, and comfortably pad the score. Not all games are fortunate enough to follow this script.

But while Los Angeles had to sweat through several high-tension moments – including a five-shot Blackhawks power play – early in an eventual 5-0 win on Monday, on Tuesday the team appeared completely comfortable throughout the 60-minute effort, in which the only even strength goal against was scored on a flukish deflection from a sharp angle on an Alex Goligoski net-front attempt that ramped off Dwight King’s skate and fluttered over Jhonas Enroth’s left shoulder.

Still, the Kings were very good in the first period on Tuesday night – their first eight minutes of the game represented about as up-tempo of a pace as the team has exhibited early in a game this season – and earlier today, Darryl Sutter commended the team’s performance when asked about the cadence with which the team opened the game.

“Back-to-back situations, most teams [play fast]. They’re right back at it again,” he said. “If you look at it, the guys are well trained. That was the tough part last night, the travel. The travel getting in from Chicago to Dallas, it’s hard on players especially when you’re coming off the two games prior to that were both overtime games also, so guys who played a lot of minutes get more minutes, if you look at Washington and New Jersey. Hard on our team. Give our players – hey, they’re resilient. We play the same way every night, and we’ve done it all year. It doesn’t matter who it’s against. Sometimes we don’t score enough, and sometimes there’s little things that make a difference, but our team shows up.”

Dustin Brown also spoke about getting into an early rhythm and playing comfortably with the lead against the Stars on Tuesday.

“We obviously started well getting a goal on the first shift. That doesn’t happen all that often, so that gives you a little spark of energy,” he said. “I thought the guys handled it. I think it was also who we’re playing. They’re tops in the west, so it’s kind of like, like you said, that playoff atmosphere. We’re getting towards that time of year where you’re starting to get in that mode, especially against other teams that you know you’re going to have to go through.”

Dustin Brown, on the team’s play 69 games into the season:
I mean, this is probably the best position we’ve been in since I’ve been here, just from a pure standings standpoint. Last year we were trying to get in it, and other years we were trying to get in as well and we squeaked in at the end with like three or four games left. I don’t know exactly what the difference is in points between us and the fourth place team, but it’s significant. So now it’s just about getting our game in order for what we need to do.

Brown, on playing with detail:
Yeah, I mean, we’ve had stretches this year where our detail hasn’t been there, and we’re I think a team that relies heavily on the detail part of the game. We’re not a skill, run-and-gun-type of team where we’re going to rely on our skill to win. It’s going to be relying on our system and our assets as players, what we do well, and that’s not an easy thing to do the way we play, but it’s a successful way.

Brown, on Rob Scuderi being a player who relies on sharp detail:
Yeah, you look at him going to Chicago and it didn’t work out for him well there, that’s really not a knock on Scuds, it’s just they play a completely different game. He’s not a defenseman that’s going to fit very well into their system. On the flip side of that, he’s a guy who can step into our system and perform really, really well. He’s more of our type of defenseman, I think. He’s very good positionally, very smart and always makes the smart plays coming out. It might not always be the home run play, but it’s the play that keeps the play alive or keeps us in the fight.

Brown, on the strong five minutes to close out both Chicago and Dallas:
It’s kind of hard in those games that are kind of out of reach at the end there, too. Three-goal lead and a five-goal lead, it’s one of those things where we’ve all been in that situation. It’s hard to kind of get anything going.