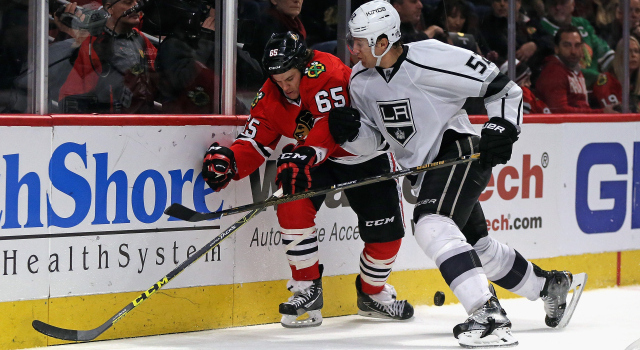 The Kings’ 5-0 win Monday night came so stuffed to the gills with storylines that it wasn’t possible to speak with all the players we wanted to gain perspective from after the game.

The heavy majority of Los Angeles skaters did not trek down to American Airlines Center for a morning skate, opting instead for meetings and video at the team hotel. As the team emerged from lunch, both Milan Lucic and Luke Schenn – two players who figured prominently into the five-goal win over Chicago – spoke with LA Kings Insider about what worked on Monday night and how to transfer their checking acumen into a similarly styled Dallas team they’ll face for the second time this season.

The Stars have enough depth to avoid any worrisome match-ups from their end, but they’ll be without three defensemen and two key forwards. Mike Heika of the Dallas Morning News has the scoop here. Again, the Kings did not hold a full morning skate, but expect the same lineup to take the ice tonight, with the possibility that Jhonas Enroth could start in goal against the club with whom he concluded last season.

Milan Lucic, on Los Angeles’ improved defensive play as the game progressed:
I think we did a good job in the D-zone as a five-man unit supporting each other so that we could get those odd-man rushes and things like that. You talked about the first period especially, I look at that first penalty kill and Quickie coming up with some huge saves and big chance s to get the puck out but they were relentless in keeping it in. I think they were in our zone for almost the whole two minutes, but we were able to keep the puck out of the net and then get the first one and the second one right after that, and we kind of kept things rolling. But like I said, I think it was just being strong as a five-man unit in the defensive zone to have some good, clean breakouts, and to catch them with some good chips and some good, hard first, second passes to create those odd-man rushes, and when we had those rushes we made ‘em count because there have been games this year where we’ve had chances and we weren’t able to score, but last night we made the most out of our chances.

Lucic, on whether it’s fair to say that Los Angeles plays its best hockey against top teams:
Yeah, I mean, those games are, I think, easier to get up for. Those are the games that you use them kind of as a measuring stick, and they’re big games for a reason. This is a team that has shown that they’re able to rise to the occasion when they’re playing against a good team. We’re going to need that down the stretch and heading into the playoffs, so it’s exciting to be a part of a group that’s able to play its best hockey against the best teams in the league, and we need to keep that up down the stretch here.

Lucic, on whether five-man units will be of value against a high-octane Dallas team:
Yeah, that’s probably the most important thing, I would say, heading into tonight’s game, is staying together as a five-man unit and sticking to our system. When we start playing like individuals, I think that’s when we start giving up too many chances and odd-man rushes, and the goals-against start happening. We’re a team that thrives off of its, like you said, the five-man unit and our system, and we need to stay true to that in order to keep winning hockey games.

Luke Schenn, on whether he needed extra ice bags after eight hits and six blocks:
No, I mean it was just one of those games where pucks seemed to be hitting you a little bit. I always try to be physical, and especially against other skilled players, I feel like any time you’re hard on guys, it makes you tougher to play against. I try to do that, and that’s kind of when I’m feeling I’m at my best.

Schenn, on Los Angeles’ improved checking as Monday’s game progressed:
Yeah, I think if we start getting into a game with teams like Chicago and Dallas, teams that fly up and down the ice with a lot of skill and a lot of speed, it’s probably playing into more of their hands than it is to our hands, so I think we’d prefer to play more of a checking game and take care of the defensive side of things first and not give up tons of chances. To create chances, we’d sooner create chances off of tight checking and playing defense, so it’s a really big challenge for us again tonight, just because I think Dallas has played really consistent and really well all year, and they’ve got some of the most skilled guys in the league on their team. They’re a really deep team as well, too, so it’s going to be tough playing on a back-to-back, but we’re going to have to come up with another solid effort, for sure.

Schenn, on whether his own game represented a standout performance:
I felt good. I don’t want to measure games just on completely what the stat sheet says, but I felt good, actually, start to finish. It was nice to contribute offensively. It doesn’t happen too often for me, but like I said, I think the main thing is I just try to move the puck into the forwards hands and try to be hard against down low and physical, and at the end of the night, if you end up getting a couple extras assists or anything like that, that’s just an added bonus.