No favors from clocks or the schedule this week 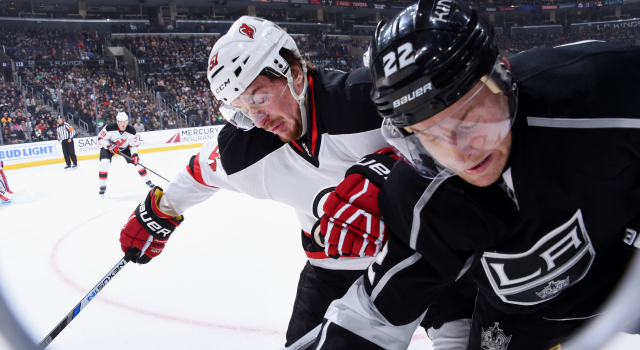 It often seems as though the schedule conspires against Pacific Division teams, who endure lengthier road trips and longer flights than many other teams based in points east. Starting Saturday night with a 2-1 overtime loss to the New Jersey Devils, the Los Angeles Kings will be jarred abruptly from a period of relative calm into a tightly compacted swath of the calendar that becomes commonplace in an 82-game NHL season.

On Sunday, the Kings boarded an airplane for the first time since they departed Nashville on February 20 at the tail end of a seven-game, two-week trip. Since then, they’ve spent 21 of 22 nights sleeping in their own bed, with the one hotel stay bridging a back-to-back set between a home game against Buffalo and a trip down Interstate 5 to face Anaheim. Monday’s game in Chicago is the first game outside Southern California in three weeks.

“Doesn’t really have any bearing on anything,” Darryl Sutter said. “If you look at our schedule, this is the third part of what we broke out, the first part being the seven-game-long trip. We accomplished what we wanted to on that trip, and we set up the last three weeks primarily was other than one night being at home, and having a home ice position at the end of that, and it’s the very same. Now we play 10 in 17 days, so that’s the next part of it.”

That effort to defend home ice position – Los Angeles is two points up on second-place Anaheim and three points up on third-place San Jose with a game in hand on the Sharks – will be tested as they venture out on a quick two-game trip to face two top Central Division teams in the Blackhawks and Dallas Stars before returning home to finish off their interconference schedule by hosting two top Eastern teams in the New York Rangers and Boston Bruins. Even though the team loses an hour due to daylight savings and travels east for four hours in advance of Monday’s game at the United Center before flying south for two hours and concluding a back-to-back against the up-tempo Stars, it’s likely to be that home game on Thursday – the caboose of a four-in-six stretch – in which the team will have to summon the reserves from its mental and physical gas tank.

So, losing that hour early Sunday morning came at a particularly unfortunate time.

“We’ve all been through this enough times to know what it takes to get ready,” Dustin Brown said. “Just getting there, getting ready to play a game that’s really three hours earlier for us is something we’ve done before, so it’s just getting ready for it.”

“We’ve got all the big trips out of the way,” Brown said. “February was our last one, so now we’re going on the road for two games, and [we’ll] just focus on those two games, so from a mental standpoint, you’re not thinking ‘seven-game road trip’ and all that business, so you can really focus on the games.”

Again, these are circumstances all teams endure. Regardless of the route traveled through the final 15 games, the Kings will have to raise their performance from what was shown in a 2-1 overtime loss to the Devils Saturday night, a game in which Los Angeles was slow getting out of the gate even though the pair of recovery days surrounding Wednesday’s game against Washington could have led to rested and refreshed legs. Despite the low score, the one point gained Saturday wasn’t a token gained from checking well and executing tightened systems play.

“No, it was an example of some of our players not playing very well,” Sutter said. “It’s exactly what I said. We gave some guys time off. They didn’t use their time very well and didn’t play very well.”

RELATED: My Dinosaur’s Jet Lag Helps Explain Why a Time Change Is Hard